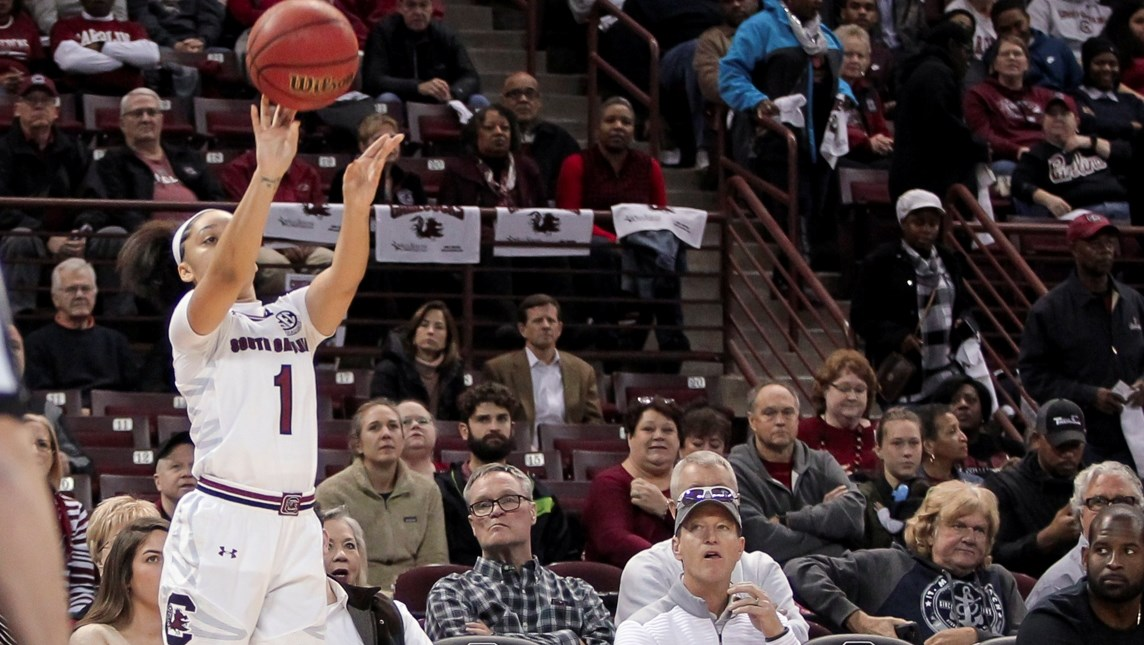 COLUMBIA, S.C. – Redshirt-senior Bianca Cuevas-Moore and #21/25 South Carolina women’s basketball dominated from the start to finish, defeating Florida 71-40 at Colonial Life Arena Thursday night. The Gamecocks (11-4, 3-0 SEC) raced out to a 19-0 lead to begin the game and never looked back to win their 10th straight over the Gators.

Cuevas-Moore made good in her first start of the season, leading the Gamecocks with a season-high 16 points on 6-of-9 shooting, including 4-of-7 from three. Alexis Jennings added 13 points on 6-of-10 shooting, adding eight boards in 28 minutes of action. Mikiah Herbert Harrigan scored in double-figures for the third-straight game, pouring in 11 points on 5-of-7 shooting. Tyasha Harris was the fourth Gamecock to reach double-figures in the win, scoring 10 points and handed out a season-high eight assists while snagging three steals.

The second quarter was a much more even 10 minutes of basketball. The once 20-point lead was cut to 12 to begin the quarter, but Jennings scored the next six points to put the Gamecocks back up by 18. Jennings went on to lead the way offensively, scoring all eight of her first-half points during the quarter on 4-of-5 shooting. The Gators were able to score the final two buckets of the first half, cutting the score to 37-23 heading into the locker room.

Carolina’s offense once again opened up in the third quarter, scoring 19 points and shooting 50.0 percent from the floor. Cuevas-Moore dropped another eight points during the quarter on a perfect 3-of-3 shooting, including a pair of threes to bring her up to her season high. The Gamecocks used a 9-0 run during the quarter to push the lead to 24 points, eventually growing to 25 by the end of the quarter.

Despite the big lead, the Gamecocks didn’t slow in the fourth quarter. Eight of the first 10 points of the quarter came from the bench, giving the Gamecocks a 32-point lead with 5:08 to go after a beautiful pass from Nelly Perry to LeLe Grissett. Carolina was able to coast the rest of the way, and earned its seventh-straight win.

GAMECHANGER
South Carolina’s 19-0 run, the largest run to start a game this season, sparked the offense to a convincing win in which they led for 39:05.

QUOTABLE DAWN STALEY
Staley on Bianca Cuevas-Moore earning the start…
“She’s healthy, she’s healthy. I told her earlier in the process of her rehabbing and her trying to get back in good health, that come SEC time is a good target to get as healthy as possible. She’s there health-wise – condition-wise, I don’t think she’s there.”

KEY STAT
Led by Cuevas-Moore’s 16 points, the Gamecock starters scored 52 points, the most points by any South Carolina starting lineup at Colonial Life Arena this season.