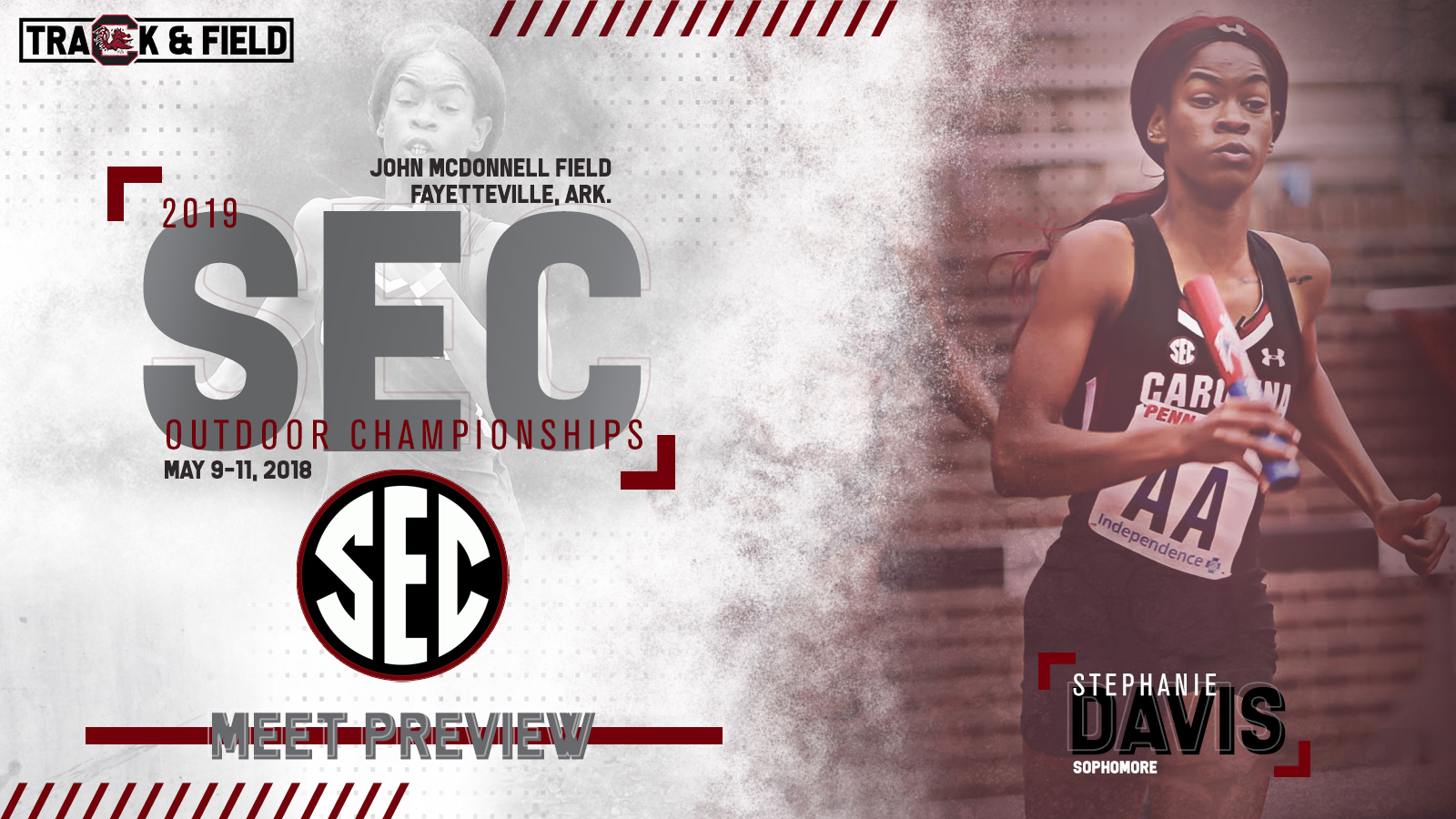 COLUMBIA, S.C. — The 2019 outdoor postseason gets underway this week as the University of South Carolina track & field team heads to the SEC Outdoor Championships. The University of Arkansas serves as host, with the meet taking place May 9-11 at John McDonnell Field.

All 14 Southeastern Conference programs are represented this week in Fayetteville as the nation’s preeminent track & field conference goes head to head for three exciting days of action. Ranked men’s program this week include No. 2 LSU, No. 4 Florida, No. 5 Texas A&M, No. 10 Alabama, No. 13 Mississippi State, No. 15 Georgia, No. 17 South Carolina and No. 20 Arkansas. On the women’s side, the ranked programs include No. 1 Arkansas, No. 2 Texas A&M, No. 4 Kentucky, No. 7 LSU, No. 8 Alabama, No. 10 Florida, No. 19 Georgia and No. 25 South Carolina.

“The SEC is the nation’s premier conference for track & field, and the SEC Championships is one of the fastest meets in the world. Legends are made at the SEC meet, and this weekend will be no different. Our student-athletes are working hard, and training has been going well. We’ve got a lot of momentum from the end of the regular season, especially our time at Penn Relays, and I’m excited to see how we build off of that and what we can accomplish.”– Head Coach Curtis Frye 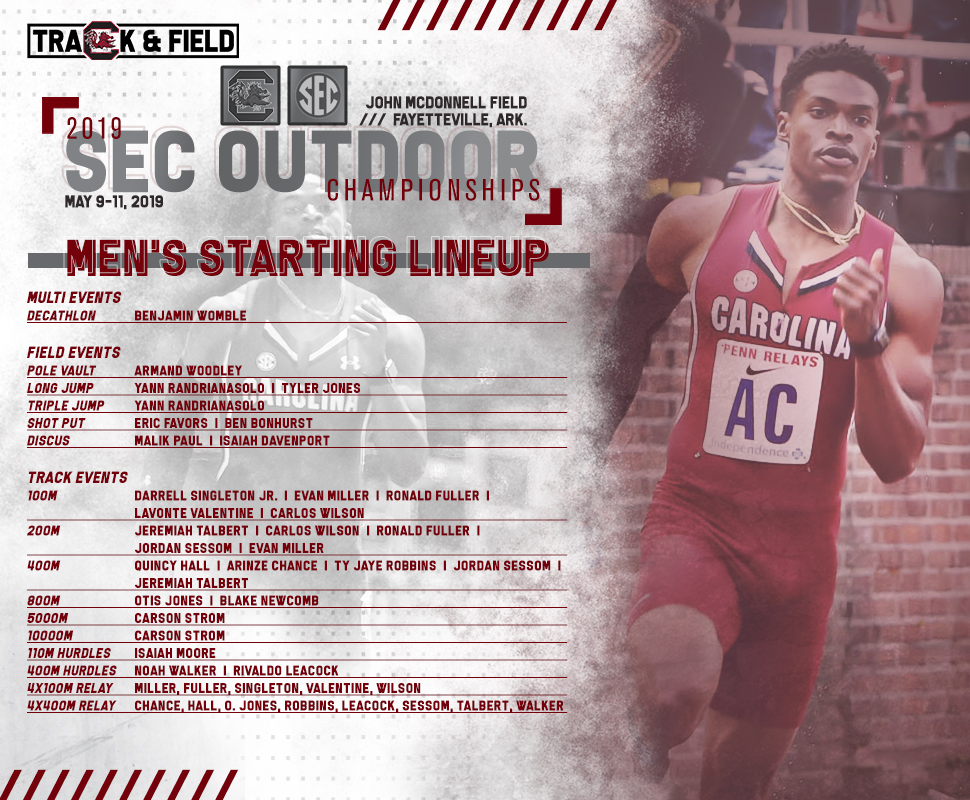 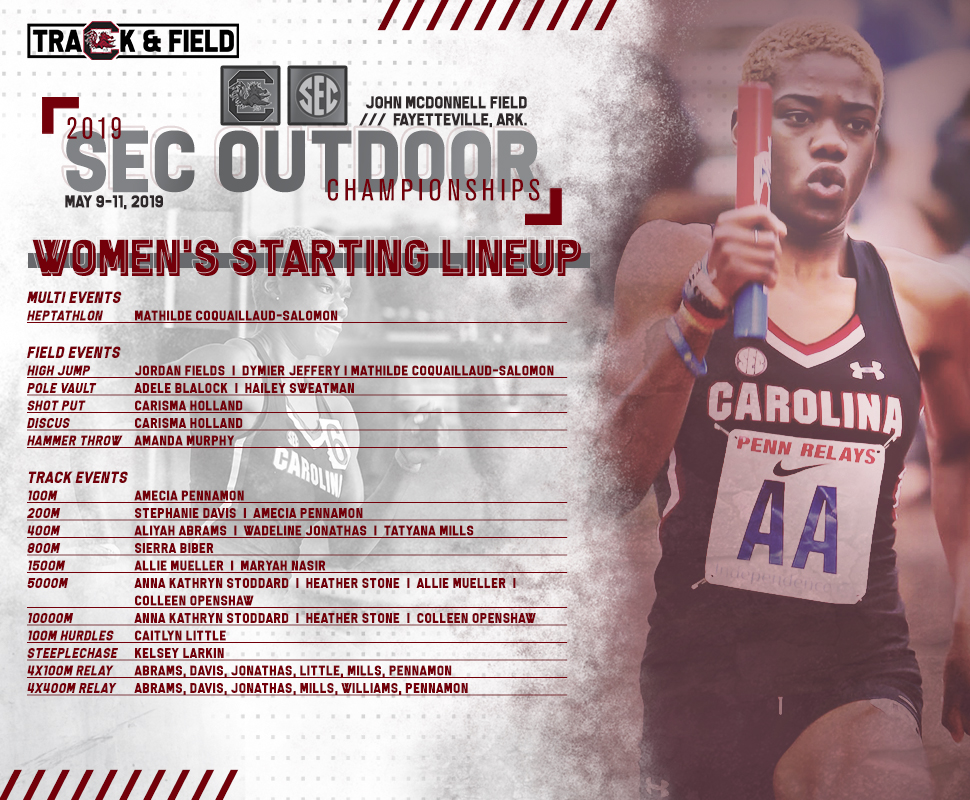 Carolina’s women are three-time SEC outdoor champions. They captured the overall title in 1999, 2002 and 2005. The best finish on the men’s side for Carolina came in 2010, when the team placed third.

Overall, the Gamecocks have combined for 47 individual and relay SEC outdoor titles on the women’s side and 26 more on the men’s side. Miki Barber leads all Gamecocks, men and women, with eight career SEC outdoor crowns, including three victories in the 400m dash. Natasha Hastings was part of six SEC wins, while Lisa Barber, Tiffany Ross and Shalonda Solomon accumulated five outdoor conference titles each.

For the men, Otukile Lekote and Brad Snyder each won four SEC outdoor titles in their careers, with Johnny Dutch, Otis Harris, Jason Richardson and Terrence Trammell each topping the podium three times. Trammell won the 110m hurdles each season from 1998-2000, while Snyder was the shot put champion in 1996, 1998 and 1999.

Carolina’s most recent individual SEC outdoor title came in 2017, as Tyler Brockington sped away with the 400m hurdles crown at Sheila & Morris Cregger Track in Columbia.

Carolina’s three Championship of America titles were the most for the program at one Penn Relays since 2007. Aliyah Abrams, Stephanie Davis and Wadeline Jonathas each hoisted two wagon wheels, as all three Gamecocks were part of the 4×2 and 4×4 titles.

GAMECOCKS CLOSING IN ON POSTSEASON BIDS WITH ONE MEET LEFT

Not only is the SEC Championships meet a chance to win conference titles; it’s also the final opportunity for student-athletes to earn a bid to the NCAA postseason. Each member of the Gamecock roster is aiming to finish the season in the NCAA East Region top 48 of their event, which guarantees a spot at the NCAA East Regional Preliminary Round, May 23-25 in Jacksonville, Fla. Here’s a look at the Gamecocks currently in Regional position.

Both sets of Gamecocks will enter the SEC Championships ranked in the USTFCCCA national top-25. The Carolina men are listed 17th, and the women are ranked 25th.

In the USTFCCCA’s Southeast Regional rankings, the Gamecock men are ranked fourth, while the women’s squad is listed sixth.

The USTFCCCA also released an updated set of #EventSquad rankings on Monday. Carolina’s top event on the men’s side is the 400m, which is ranked sixth. Two Carolina women’s events are ranked in the top10: the 400m group is listed third, and the 200m sprinters ninth.

QUARLES TO COACH FOR TEAM USA AT IAAF WORLD CHAMPIONSHIPS

University of South Carolina assistant head coach Delethea Quarles was named to the Team USA coaching staff for this summer’s IAAF World Championships, the USATF announced on April 18. Quarles will serve as the assistant coach for women’s jumps and combined events under head coach Bonnie Edmonson of Trinity College.

In the women’s 3K, Stone led wire-to-wire, posting the fifth-best time in Carolina history, 9:49.83. Holland added the best discus performance of her career. Her winning throw of 48.01m (157-6) is the 10th-best mark in Carolina history.

April 13, 2019 will go down in the history books as one of the finest days in the history of the University of South Carolina track & field team, as head coach Curtis Frye’s program made a global impact on the track and retired the jerseys of two all-time legends at the Gamecock Invitational. Two Gamecocks surged to the top of the NCAA leaderboard and assumed world leads in their events, and Carolina alumni Miki Barber and Terrence Trammell became the first college track & field athletes in history to have their jerseys retired.

Hall was once again incredible in his Cregger Track debut, setting a new South Carolina record for the sixth time this season. This time it came in the 400m, where he ran 44.53, which at the time was the best mark in the world this year. His run broke the previous Carolina record of 44.57, set in 2003 by Otis Harris.

Prior to the start of the prime-time window, South Carolina officially retired the jerseys of Barber (1999-2003) and Trammell (1998-2000). The duo combined for 11 NCAA event championships and 33 All-America finishes. They were each named 2000 USTFCCCA Athlete of the Year as the top collegians in track & field, and they each represented the United States of America at the Olympic level, with Trammell earning a pair of silver medals in the 110m hurdles.

South Carolina won nine events April 5-6 in its annual trip to the Spec Towns Invitational in Athens, Ga. Two Gamecocks were victorious on the opening day, as Quincy Hall won the 400m hurdles and Yann Randrianasolo was the Lewis Gainey Long Jump winner for the second season in a row. Hall’s 400mH time of 50.34, his first as a Gamecock, ranks ninth in program history. The Gamecocks also got a pair of new program top-10 times in the 1500m, from Anna Kathryn Stoddard (4:31.59) and Maryah Nasir (4:32.46).

South Carolina made its annual trip to the Florida Relays and left Gainesville with several strong results. Chief among the efforts was Carolina’s run in the women’s 4x400m relay. Stephanie Davis, Aliyah Abrams, Tatyana Mills and Wadeline Jonathas were together for the first time since their national title-winning run at the NCAA Indoor Championships, and the quartet somehow managed to outdo themselves again. Jonathas ran a furious closing stretch to overtake Florida and Alabama on the final straightaway, and the team’s time of 3:27.53 leads the NCAA and ranks second in the world as of May 6.

The Gamecock distance crew was spectacular, accounting for five new marks on the program’s all-time top-10. Anna Kathryn Stoddard (16:52.76) and Heather Stone (16:57.46) moved to fourth and sixth, respectively, on the program’s 5000m list, while Kelsey Larkin (11:15.98) ran the third-fastest 3000m steeplechase in school history. Allie Mueller (4:30.27) moved up to sixth in school history in the 1500m, Last but not least, the 4x800m relay team of Mueller, Maryah Nasir, Macie Kavanaugh and Sierra Biber ran 9:02.50, the seventh-best mark in program history.

The Gamecocks were in complete control of the Buccaneer Invitational, held March 22-23 in Charleston, S.C. South Carolina won 18 event titles at the meet, by far the most at the seven-team event.

Fields set a new outdoor personal best on Saturday, clearing 1.75m (5-8 ¾) to move up to sixth on the Carolina records chart. Freshman Dymier Jeffery came in second; her effort of 1.70m (5-7) is 10th-best in Carolina history.

South Carolina opened its outdoor campaign March 15-16 at the Black and Gold Challenge in Orlando, Fla. Despite fielding a limited group of entries, the Gamecocks led the meet with 11 event victories.

The Gamecocks notched three program top-10 marks in Orlando as part of their 11 victories. Anna Kathryn Stoddard won the women’s 1500m with a time of 4:34.23, which at the time was the ninth-best mark in Carolina history, and long jump All-American Yann Randrianasolo competed in the men’s triple jump, where his mark of 15.61m ranks seventh on the records list. The women’s 4x800m crew of Allie Mueller, Maryah Nasir, Sierra Biber and Macie Kavanaugh laid down the ninth-best time in Carolina history, 9:04.39.

The Gamecocks enter the outdoor season on the heels of the program’s best NCAA Indoor Championships in over a decade. The Carolina women finished tied for seventh, their first NCAA top-10 finish since 2007, while the Gamecock men tied for 20th, their best result at the national indoor meet since 2010.

The highlight of the meet was Carolina’s national championship in the women’s 4x400m relay. Stephanie Davis, Aliyah Abrams, Tatyana Mills and Wadeline Jonathas ran 3:30.76 to edge Texas A&M (3:30.85) and Arkansas (3:30.86) for the crown. It’s the 47th NCAA event championship in Gamecock history and the first since 2015. It’s also the program’s seventh women’s 4x400m relay NCAA title and the first since 2007.

Overall, Carolina finished 10th in the men’s competition and 12th on the women’s side.

On the men’s side, Isaiah Moore and Yann Randrianasolo each return with outdoor All-America results under their belts. Moore was a first-team finisher in 2017 after taking eighth in the 100m hurdles.

The 2019 outdoor NCAA postseason begins May 23-25, as the top-48 qualifiers in individual events and the top-24 qualifiers in each relay compete at the NCAA East Regional Preliminary Round in Jacksonville, Fla. The top-12 finishers at each Regional go on to the 2019 NCAA Outdoor Championships, June 5-8 in Austin, Texas.

The Gamecocks begin the postseason in two weeks with the 2019 SEC Championships. Arkansas hosts the meet, which will be held May 9-11 in Fayetteville, Ark.