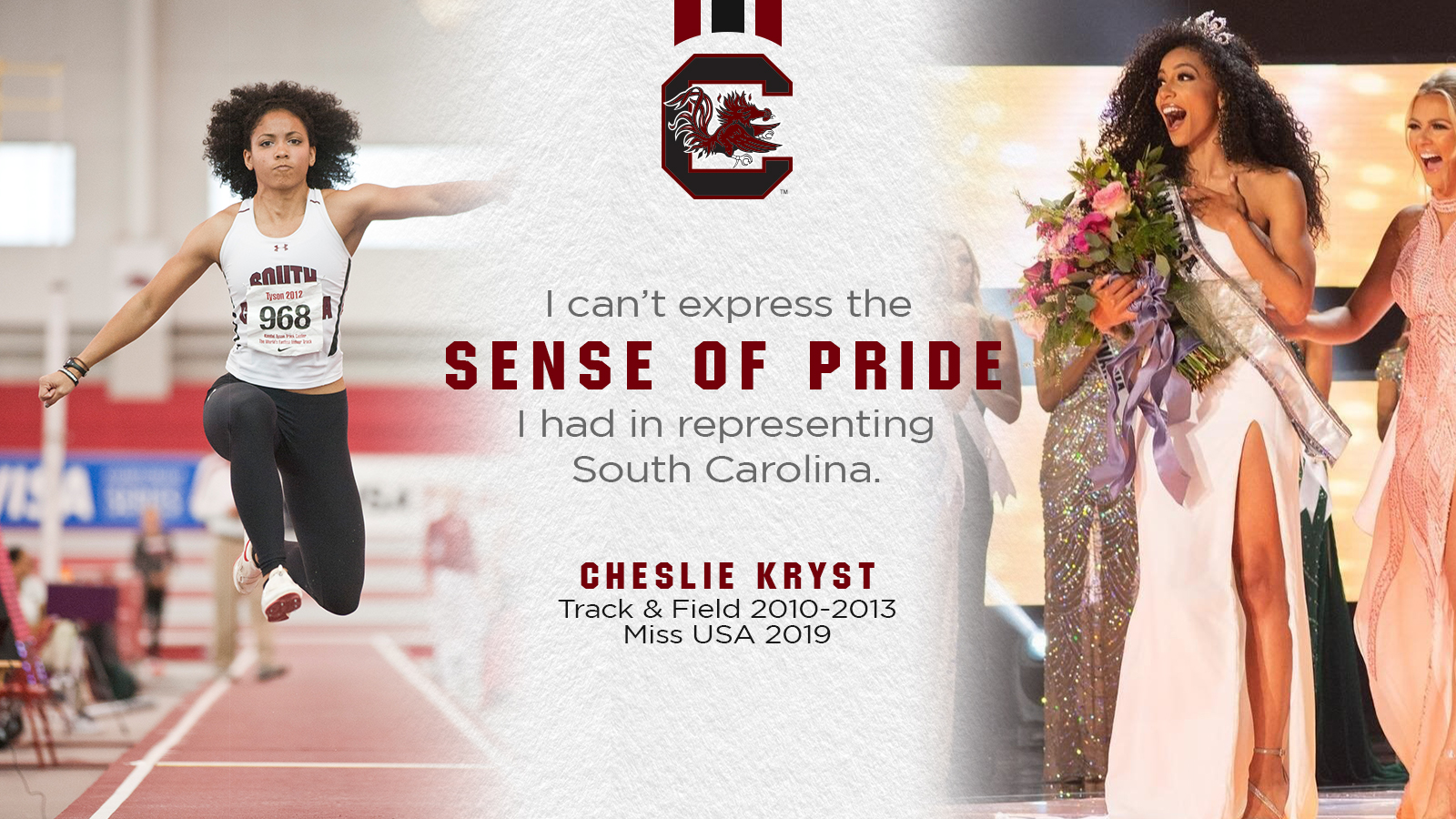 Competing in the SEC and being crowned Miss USA are both lofty accomplishments. Having happily achieved both, former South Carolina track & field standout Cheslie Kryst (2010-2013), who was crowned Miss USA earlier this month, said her biggest dream was to become an attorney.

“From the time I was little, I wanted to be an attorney,” Kryst said. “When I was in high school, I went to the National Youth Leadership Forum on Law in Washington, D.C. That solidified that dream for me because we did a mock trial. We visited the Supreme Court, and we learned about the legal profession.

“I have five siblings, and when I was younger, I was always the kid who was negotiating my siblings out of trouble.”

Kryst recalled an instance where she and her brother, Asa (2011-2015), who played soccer at South Carolina, were wrestling with a paintball gun and accidentally broke a window. She called her mom to relay the story and negotiated a softer penalty since nobody was hurt and the window could be replaced.

“The legal system came naturally for me, and people trusted me to speak for them,” Kryst said.

“I do civil litigation,” Kryst said. “I generally represent businesses. We do a lot of defense work.

“I also do pro bono work for low level drug offenders who have been given excessive sentences. I really enjoying doing that kind of work, and I’m happy to do it pro bono.”

Originally, from Fort Mill, S.C., the 28-year-old began entering pageants early in high school. She took time off from pageant life during her undergraduate days at South Carolina where she competed in the long jump, triple jump and heptathlon for the Gamecocks.

“Competing at the SEC Championships is a monumental achievement for anybody who gets to do it, especially for track and field athletes,” Kryst said. “I can’t express the sense of pride I had in representing South Carolina and wearing that on my chest wherever I competed.

“Competing for Miss USA, I can’t even compare the two. They’re both very special and monumental events. Most people don’t know that there are a lot of athletes in pageants.”

Among her best memories of her days in the Garnet and Black were placing second in the triple jump at the prestigious Penn Relays as a senior as well ranking in the top 10 in the school record books for the event.

“I wear that like a badge of honor,” Kryst said. “What also sticks out is when I was injured during my sophomore year. I was happy that the coaching staff was so supportive. I wanted to switch events after my injury, and they let me do that. They helped me throughout my rehab, and they made me a better athlete because of their support.”

“Community service has been, and will always be, very important to me.”
– Cheslie  Kryst

Kryst competed in the Miss America pageant circuit for two years while in law school and entered the Miss Universe system after that.  She noted that her dream of becoming Miss USA developed as she got older because her mother was crowned Mrs. North Carolina in 2002.

“It hasn’t sunk in yet that I won,” Kryst said. “My crown is on one of my side tables in my room. I wake up, and I remember I actually did win!”

Now that she holds the title of Miss USA, Kryst is taking time off from her work as an attorney and has moved to New York City.

“I’ll serve as Miss USA for an entire year. It’s an incredible job,” Kryst said. “One of the things I’m really excited to do is work with Dress for Success. It’s an international organization that focuses on economic independence for women. I volunteered at the Charlotte chapter when I lived there, and I hope to continue my advocacy on a broader scale.”

Kryst is no stranger to working the in the community after seeing the impact it can have, first hand.

“There was a time when my family and I didn’t have much,” Kryst said. “We came from very humble beginnings. I remember when I first made the cheerleading team in the eighth grade. I was happy I made the team, but I was sad because the shoes that we needed to buy were $30 or $40. I didn’t know if we would be able to afford that. My mom always made it work. She always put forth the effort, and there were people in our community that helped us and mentored us. Because of that, community service has been, and will always be, very important to me.”

With her busy schedule, Kryst is still athletically active. Like everything else, she gets that from her family.

“My entire family is full of athletes,” Kryst said. “My mom has us doing 5Ks on Thanksgiving each year. We do the Turkey Trot in North Carolina, and we’ll usually venture down to Charleston to do the Cooper River Bridge Run. We all stay pretty involved. My brother, Asa, played soccer at South Carolina and then for the Charlotte Independence (USL) and has played professionally in Australia. I have another brother, Chandler, who is playing football at Coastal Carolina. My dad was a bodybuilder. We’re always tied into athletics. It’s a huge part of our lives and always will be.”

Kryst looks forward to returning to her alma mater soon to pay it forward as a motivational speaker for the student-athletes.