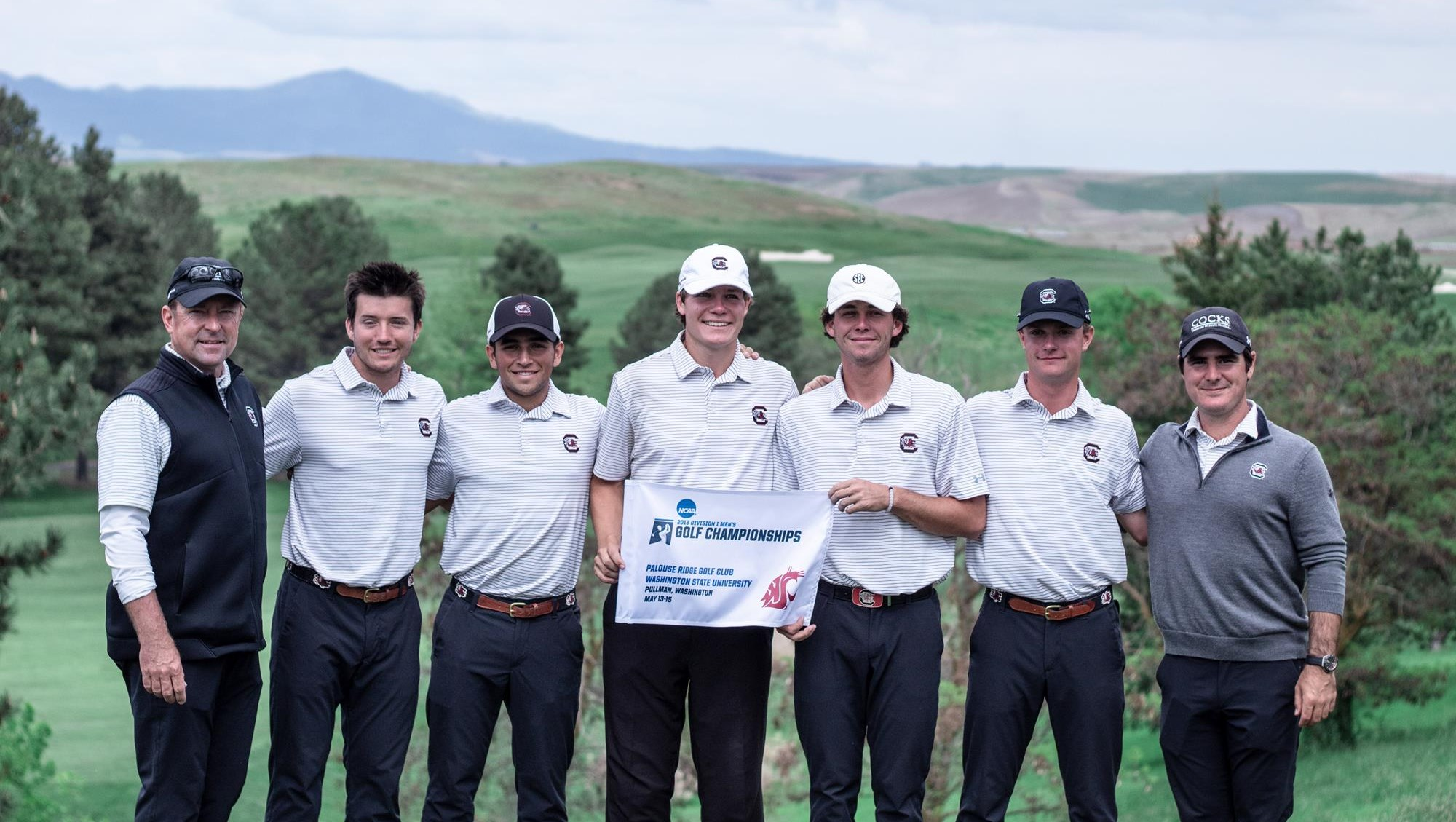 No. 17 Gamecocks Advance in Playoff from NCAA Regionals

Carolina making its 21st NCAA Championship after dramatic, final round comeback in Pullman

PULLMAN, Wash. &madh No. 17 South Carolina is headed back to the NCAA Championship after taking down Colorado State in a dramatic, sudden-death playoff for the fifth spot out of the NCAA Pullman Regional on Wednesday afternoon. Senior Scott Stevens sealed the victory with a short par putt.

“Really proud of these kids and how hard they fought today to bring us back into this thing” said head coach Bill McDonald. “Scott Stevens made birdie at 16 and 17 and a bunch of guys made birdie at hole 18. I guess it was just meant to be. It’s one of those things you can’t explain. They found a way this week, and it’s just really cool to be going back to the National Championship.”

All five players from each team went back to play the tough par-4 ninth hole after the teams finished stroke play tied with a 54-hole total of 819 (-21). Each score counted with the low total advancing to next week’s National Championship at the Blessings Golf Club in Fayetteville, Ark.

They went off in two five-somes, junior Caleb Proveaux and freshman Ryan Hall in the first wave for the third-seeded Gamecocks – seniors Will Miles, Ryan Stachler and Stevens in the second wave.

Hall and Proveaux each made par after missing birdie looks. The Rams made birdie, par and bogey to leave the scoreboard all square. All five players in the second wave had birdie putts. Miles was furthest away at about 50 feet while the others all had makeable 3s. He put his to about six feet with a great lag putt. Stevens left his birdie attempt just shy, and Colorado State made two pars. Stachler had the best birdie look out of all 10 players after stuffing his tee shot tight above the hole. He sunk a clutch putt for a three to give the Gamecocks a leg up. Miles made his par putt then Stevens sealed it with his short putt.

The Gamecocks made a dramatic comeback in stroke play to force the playoff with CSU. Carolina shot the second-best round of the day behind a BYU, a 13-under 267. The Gamecocks, who were four shots out of fourth going into today’s final round, trailed by 10 shots heading into the back nine. Miles, Proveaux and Hall all birdied the par-5 18th. Stevens made huge birdies on 16 and 17 and then made a clutch par save on 18 to send it to the sudden-death playoff.

The Chattanooga, Tenn., native, played lights out golf this week, finishing T-3rd after matching a career-best 54-hole score with a 198 (-12).  He shot in the 60s every round, closing with a bogey free 65 today. Stevens had just two bad numbers on his scorecard all week, a bogey and a double bogey.

Hall, who was playing in his first tournament in the lineup this spring, also had a bogey free round with a 4-under 66. He tied for 24th in his postseason debut at five-under overall. Miles, who struggled the first two rounds, showed up in a big way with a final round 66 (-4) with five birdies. He made a huge par save on hole 15 from 30-feet out after an errant tee shot. Proveaux was the final counting score with an even par 70. He made the turn at 1-over and fought hard coming in with a 1-under 34 on the back nine. The Lexington, S.C., native, also made a huge par at 15 after flying his second shot over the back of the green. Stachler shot 75 (+5) closing with a birdie on 18.

The NCAA Championship begins next Friday with the opening round. They’ll be 54-holes of stroke play before a cut to 15 teams. There’s one more day of stroke play after that to determine the top-eight for match play.

NOTABLE
> This marks the seventh NCAA Championship appearance under head coach Bill McDonald in his 13 seasons with the program. The Gamecocks last made it to Nationals in 2016, advancing to the NCAA Match Play Quarterfinals and finishing T-5th, the best finish in program history.
> It marks the 21st all-time NCAA Championship in program history.
> The Gamecocks had 53 birdies total for the tournament this week, with 18 coming today from the team’s four counting scores.
> Carolina tied for the field lead in par-5 scoring average with Oklahoma at 4.67 (-15).
> Stevens was one of just four players in the field with multiple eagles.
> Hall led the team with 12 birdies this week. Stachler, Stevens and Proveaux all had double-digit red numbers on their scorecards as well with 11 each.

*Advanced in a one-hole playoff on hole nine