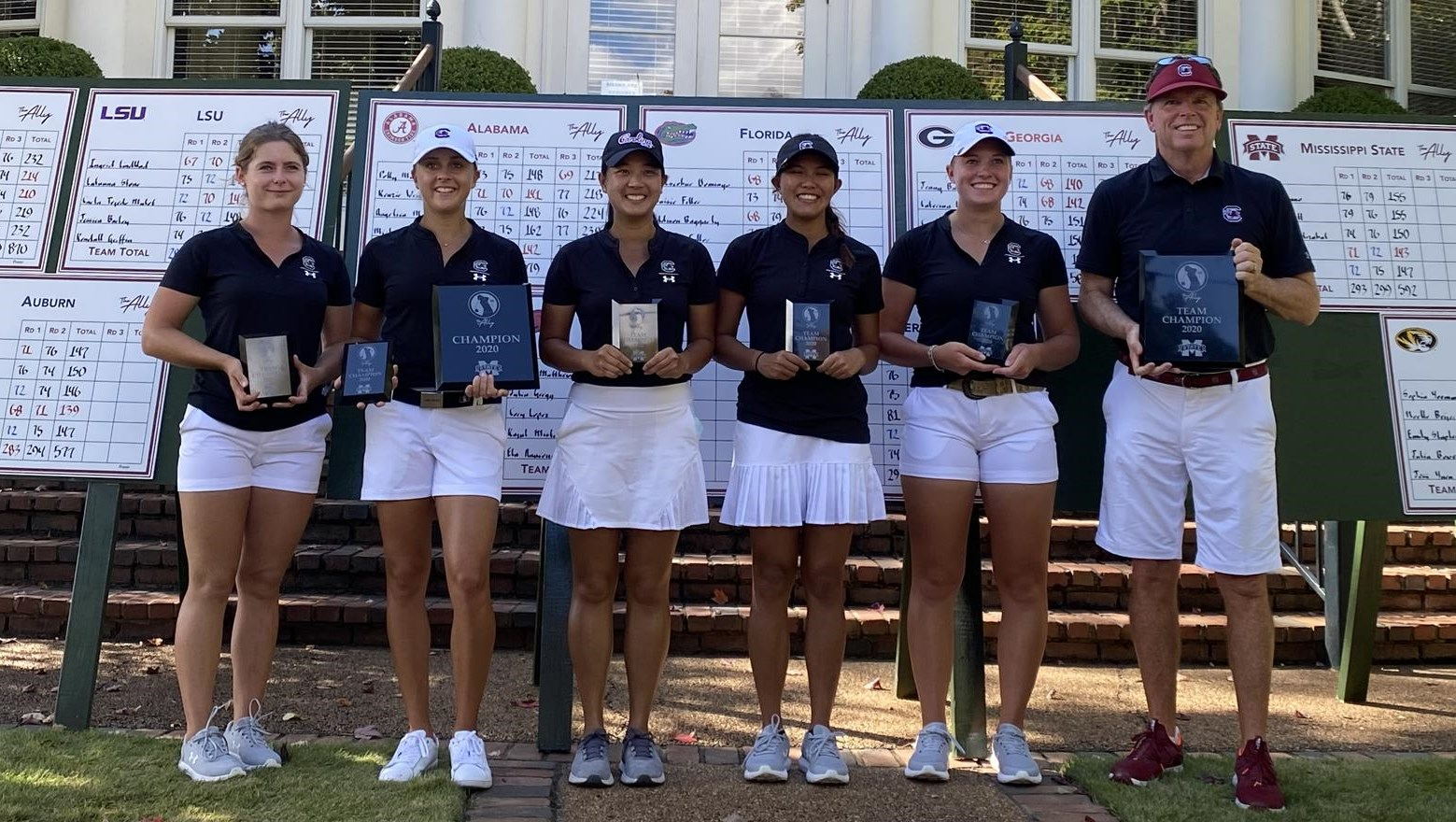 Gamecocks and Roussin-Bouchard Take Top Honors at The Ally

WEST POINT, Miss.  –  The University of South Carolina’s women’s golf team finished strong to secure the team championship at The Ally, while sophomore Pauline Roussin-Bouchard used a lights out performance to make history at the Old Waverly Golf Club on Wednesday.

Roussin-Bouchard continued her blistering performance from Tuesday by shooting a 7-under 65, tying her lowest round as a Gamecock, to finish with a 14-under 202, the lowest 54-hole tournament score in program history. The sophomore tallied seven birdies in the final round to secure her second tournament win, joining some elite company as just the sixth Carolina golfer to win multiple tournament championships. Roussin-Bouchard now has four top-5 finishes, and six top-10 finishes in her Carolina career.

“Very proud of the team this week,” assistant coach Kevin Williams said after the tournament. “Just exceptional fight and grit out of our group. This was a wonderful field, the SEC is such a strong conference and we’re really excited to come out on top. It’s very exciting for Pauline to win another individual championship to go along with the one she got last year. I really like how our team responded today. We were struggling a little bit and lost the lead but on the back nine we showed the heart of a champion and I was so excited to see how they responded.”

Senior Lois Kaye Go continued her strong performance at the tournament, shooting a 1-over 73 to finish in a tie for ninth place, her sixth top-10 finish for the Garnet and Black. Go was steady through the front nine on Wednesday before sinking three birdies in a row on 13-15 to help Carolina fend off any rally attempts and secure the team championship.

Sophomore Mathilde Claisse just missed out on her first career top-10 as she finished in a tie for 12th. The Paris, France native drained five birdies to score her second straight 1-under 71 and give her the second top-20 finish of her career.

Freshman Paula Kirner notched a trio of birdies on Wednesday on her way to a 3-over 75, while senior Pimnipa Panthong found her groove late with back-to-back birdies on 15 and 16.

In addition to Roussin-Bouchard’s historic numbers, the team’s 852 for the tournament is the sixth-lowest score for any Carolina 54-hole tournament performance. This is the 30th team championship in program history.

The Gamecocks get a couple days to savor this win before hitting the road for the final tournament of the fall, The East Lake Cup. The tournament is set for Oct. 26-28 with daily coverage on the Golf Channel.