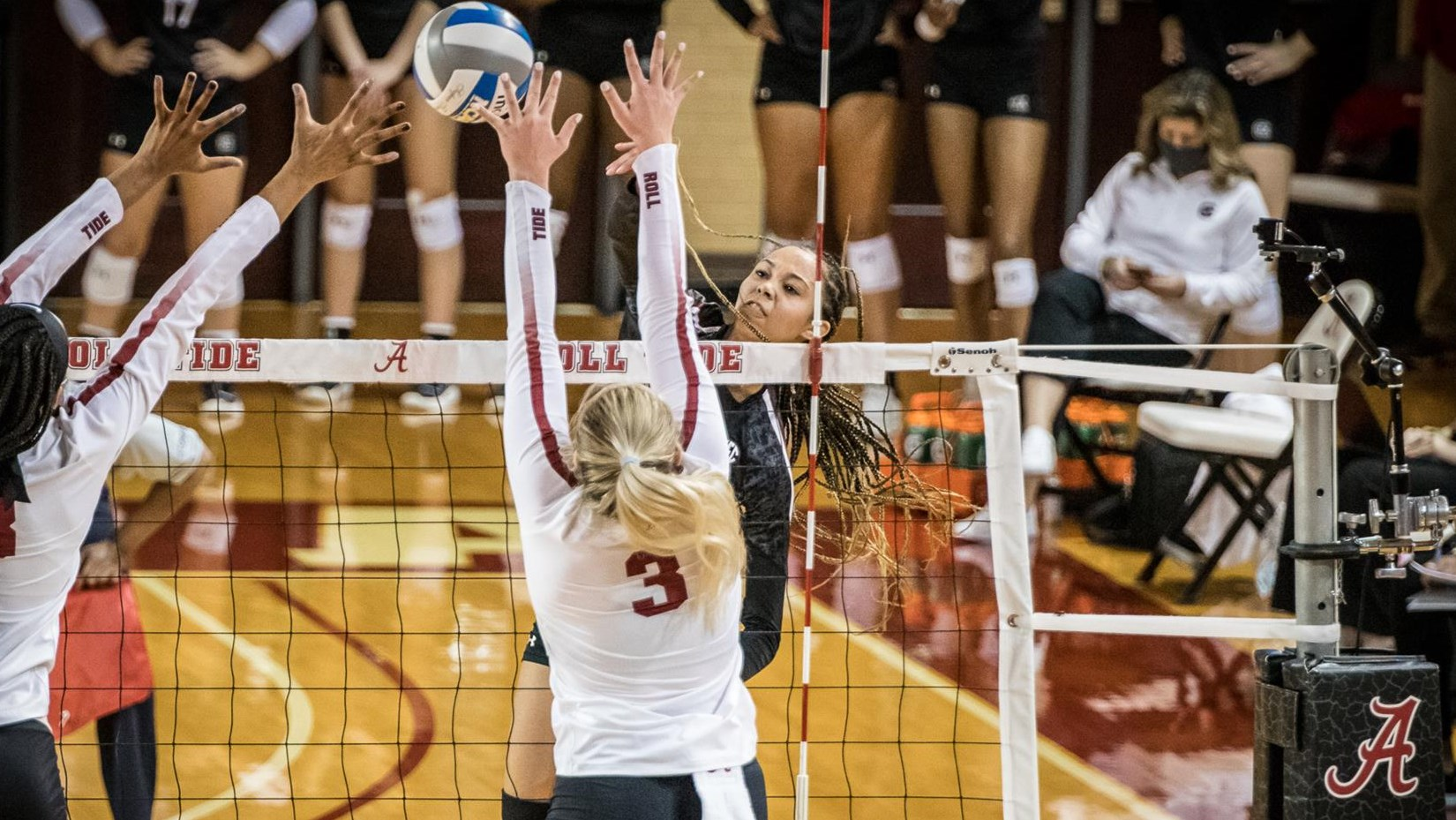 Gamecocks Come From Behind to Secure Road Win at Alabama

The team trailed 2-1, but were led by Kyla Manning's 20 kills

SET ONE: It was a slow start for the Gamecocks to open the match, and Alabama built a comfortable lead early and went into the media timeout ahead 15-10. The reliable combination of Riley Whitesides and Kyla Manning helped the Gamecocks make a run back to tie the set at 18, with the two accounting for five kills and a pair of blocks in the 8-3 run. The Gamecocks gained the lead at 23-22, but the Tide put down back-to-back kills and blocked Carolina for the clinching point at 25-23. Along with five kills, Manning ended the set with a team-high three blocks.

SET TWO: Blocking helped South Carolina regain its energy to start game two, as McKenzie Moorman assisted on three denials early to build an 8-2 lead and forced the home side into a quick timeout. Another 6-0 pushed the visitor’s lead into double digits, 15-4, with unforced errors by the Tide accounting for half of the run. The Gamecocks were also given a boost from Mikayla Robinson, who sat the first set but came in motivated and accounted for four kills and three blocks in the set. All told, South Carolina finished the set with five blocks and held Alabama to just five kills and a -.138 hitting percentage in the 25-13 rout to tie the match at one set apiece.

SET THREE: The Crimson Tide used its serve game to answer back at the start of set three, taking an 8-1 lead behind a 7-0 run featuring a pair of aces. The passing quality bled over to South Carolina’s offense, which committed six attack errors in Alabama’s first 15 points of the set as the Tide pushed ahead to 15-5. The home offense was crisp in the third, going without an attack error until it had already built a 23-12 advantage and closed out a 25-17 decision to take the 2-1 match lead. For the set, Alabama out-hit South Carolina .478 to .118.

SET FOUR: Facing its first must-win set of the weekend, the Gamecock offense sharpened in the fourth set, hitting .419 with just two unforced errors and a match-high 17 kills as a team to win 25-18 and force a fifth set. Manning and Robinson spearheaded the attack, with 12 kills combined on just 20 swings. A span of high-effort scrambles from Lauren Bowers on the back line of the defense sparked a stretch of back-to-back kills for Carolina that forced an Alabama timeout at 11-5. The Tide would get no closer than four points the rest of the way.

SET FIVE: In the race to 15, South Carolina used a key run early to break away from a 6-5 lead. A kill and block on back-to-back plays from Mikayla Robinson sparked a 4-0 run that doubled up Alabama and pushed the home team into a timeout to regroup. The Crimson Tide fell victim to unforced errors in the final game, committing six to help the Gamecocks race ahead for an advantage it would not relinquish. McKenzie Moorman accounted for half of the team’s eight kills in the set, helping the sophomore finish with 11 kills in the match.

UP NEXT
The team will return home for back-to-back weekends of action in the Carolina Volleyball Center. It starts with a Thursday and Friday series against Mississippi State Feb. 4 and 5. Both games against the Bulldogs will begin at 7 p.m. Broadcast information will be announced when available.