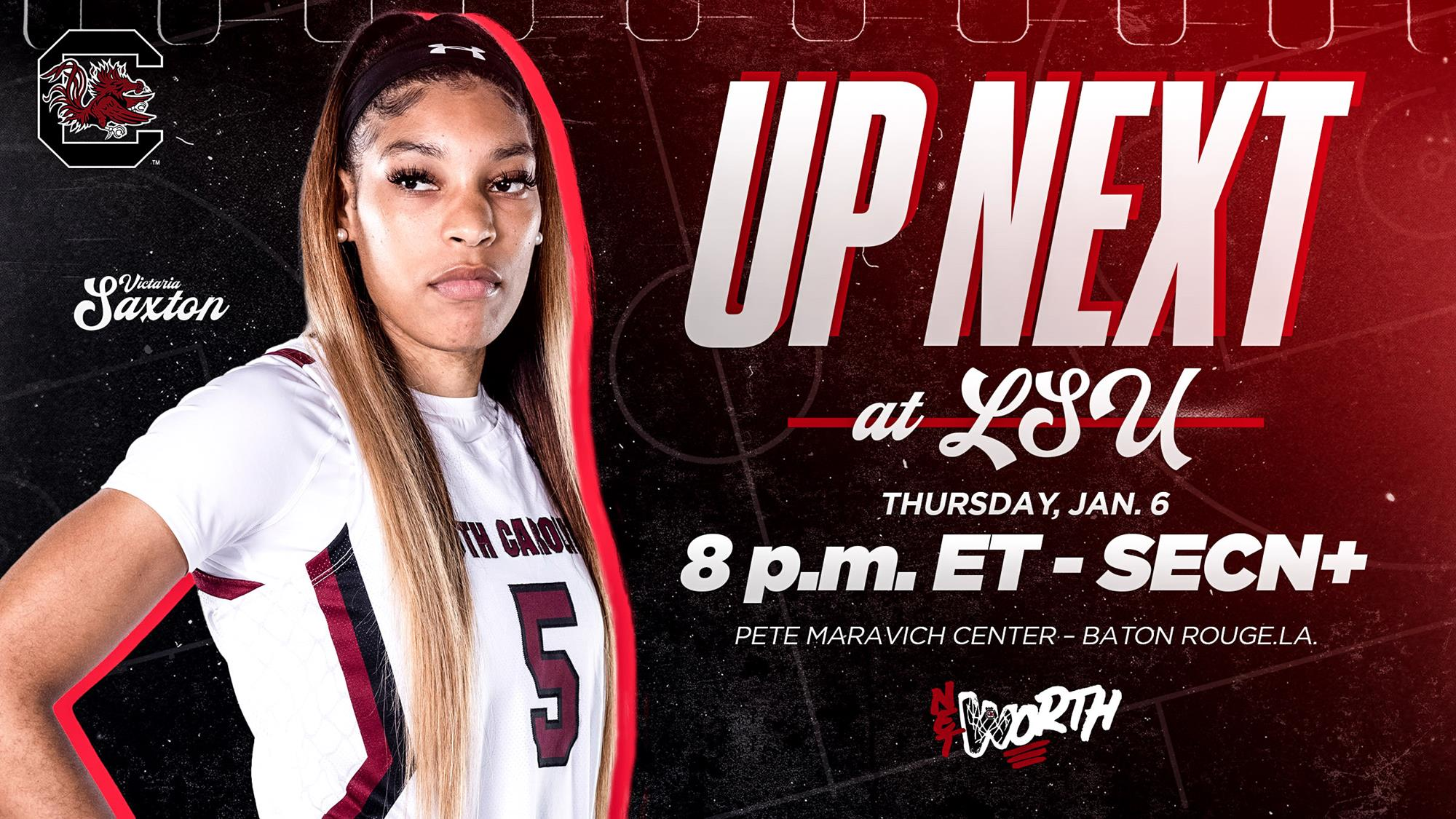 7.3 – In three games since returning from her left leg injury, Destanni Henderson has handed out 7.3 assists per game.

34 – South Carolina’s all-time 34 weeks at No. 1 in the AP Poll are tied for the sixth-most in the history of that poll (Duke, Old Dominion).

The LSU Series
LSU leads the overall series 22-16, but the Gamecocks have won the last 12 meetings and are 13-5 against the Tigers in the Dawn Staley era. This is the fourth time South Carolina has carried a No. 1 ranking into a game against LSU, including last season’s Valentine’s Day matchup, which it won by seven (66-59) in Columbia.

The Gamecocks also won their last trip to the Maravich Center, a 69-65 decision on Jan. 24, 2021. The Tigers took a two-point lead into halftime of that game, and the teams tied the third quarter. South Carolina took the lead early in the fourth on a Destanni Henderson 3-pointer and stretched it to nine with just 1:14 left to play. LeLe Grissett poured in all eight of her points in the final period, all on fast breaks. The Tigers persisted, forcing a pair of late turnovers but ran out of time to fully close the gap.

Road Ready
The Gamecocks are 279-260 all-time in road games, including a 104-46 mark under head coach Dawn Staley.  Her .693 winning percentage on the road is the best in program history.

Ranked Readings
Against ranked opponents, South Carolina is 91-66 in the Dawn Staley era (beginning 2008-09), and even that mark is skewed by the early seasons of her tenure.

This season, South Carolina’s six wins over ranked opponents (all top-15 teams) are the most in the country and have come by an average of 10.3 points.

Junior Aliyah Boston leads the team against ranked opponents, averaging a double-double (16.5 pts/11.7 rebs) to go with 4.0 blocks per game.

Henny-thing Goes
Senior point guard Destanni Henderson is coming into her own in her final collegiate season, proving that trust in the process works. Entering the program as the No. 1 point guard in the Class of 2018, she waited her turn to step in to the starting role – even accepting a star bench position as a sophomore instead of clamoring for a start at a different guard spot.

In two season as the starting point guard, Henderson is handing out 5.1 assists per game, including 25 of 42 games with five or more, and has a 1.9 assist-to-turnover ratio. Her 12.0 points per game in that time includes 41.4 percent from 3-point range. A more surprising stat for the 5-foot-8 speedster is her 4.6 rebounding average as a starter as well.