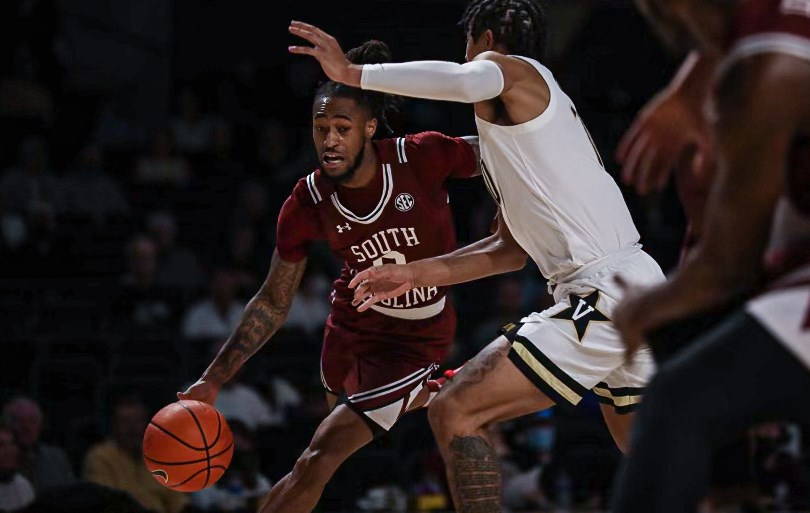 NASHVILLE (AP) – James Reese V scored 13 points and Vanderbilt failed to get up a shot in the final 6.3 seconds as South Carolina pulled out a 72-70 win on Saturday.

Myles Stute, who led the Commodores with 19 points, made 1 of 2 free throws with 12 seconds left. Reese responded with 1 of 2 from the line with 6.3 seconds to go.

Following a timeout, Scotty Pippen Jr. took the ball the length of the court but as he drove to the basket tried to kick out out as time expired.

Pippen scored 15 of his 17 in the second half and Jordan Wright had 15 for the Commodores (9-5, 1-1), who had their four-game winning streak snapped.

South Carolina led 34-32 at the half. Four free throws by Pippen had Vanderbilt within 49-48 but Jermaine Couisnard hit a 3 and scored the last seven points in an 8-0 run to make it 57-48 just past the midpoint. A three-point play by Reese produced the big lead at 64-53 with 6:08 to go.

Pippen’s jumper pulled Vanderbilt within 69-67 with 1:34 remaining. Devin Carter made a dunk for South Carolina with just under a minute to play but Pippen made two more free throws and it was 71-69 at 40 seconds.

The Gamecocks ran the clock down but missed a 3-pointer and Stute was fouled on the rebound.

South Carolina plays at No. 18 Tennessee on Tuesday while Vanderbilt is home against Kentucky.

KEY STATS
> South Carolina was efficient from the floor, shooting 54.9 percent from the floor, marking the 3rd-highest mark for it this season.
> The Gamecocks won the battle in the paint, scoring 34 points in the post compared to Vanderbilt’s 20 points in the paint.
> South Carolina’s bench outscored the Commodores’ reserves 30-11.
> James Reese V and Wildens Leveque ended the game as the only Gamecocks in double figures. Reese V scored 13 points and Leveque added 10 points.
> All 11 Gamecocks who saw the court scored points.

NOTABLES
> It’s the first SEC victory of the season for South Carolina.
> The victory marks the Gamecocks’ first true road victory of the season.
> The Gamecocks move to 4-6 in SEC road openers under coach Frank Martin.
> The win is the third inside of Memorial Gymnasium since 2010 for South Carolina and the second under Frank Martin.
> The Gamecocks forced 19 turnovers on Saturday. All 14 of their opponents have committed at least 14 turnovers.

UP NEXT
> South Carolina remains on the road as it travels to No. 18/18 Tennessee on Tuesday. Tip time in Knoxville is set for 6:30 p.m. (ET). Tom Hart (pxp) and Dane Bradshaw (color) will be on the call for the SEC Network broadcast.