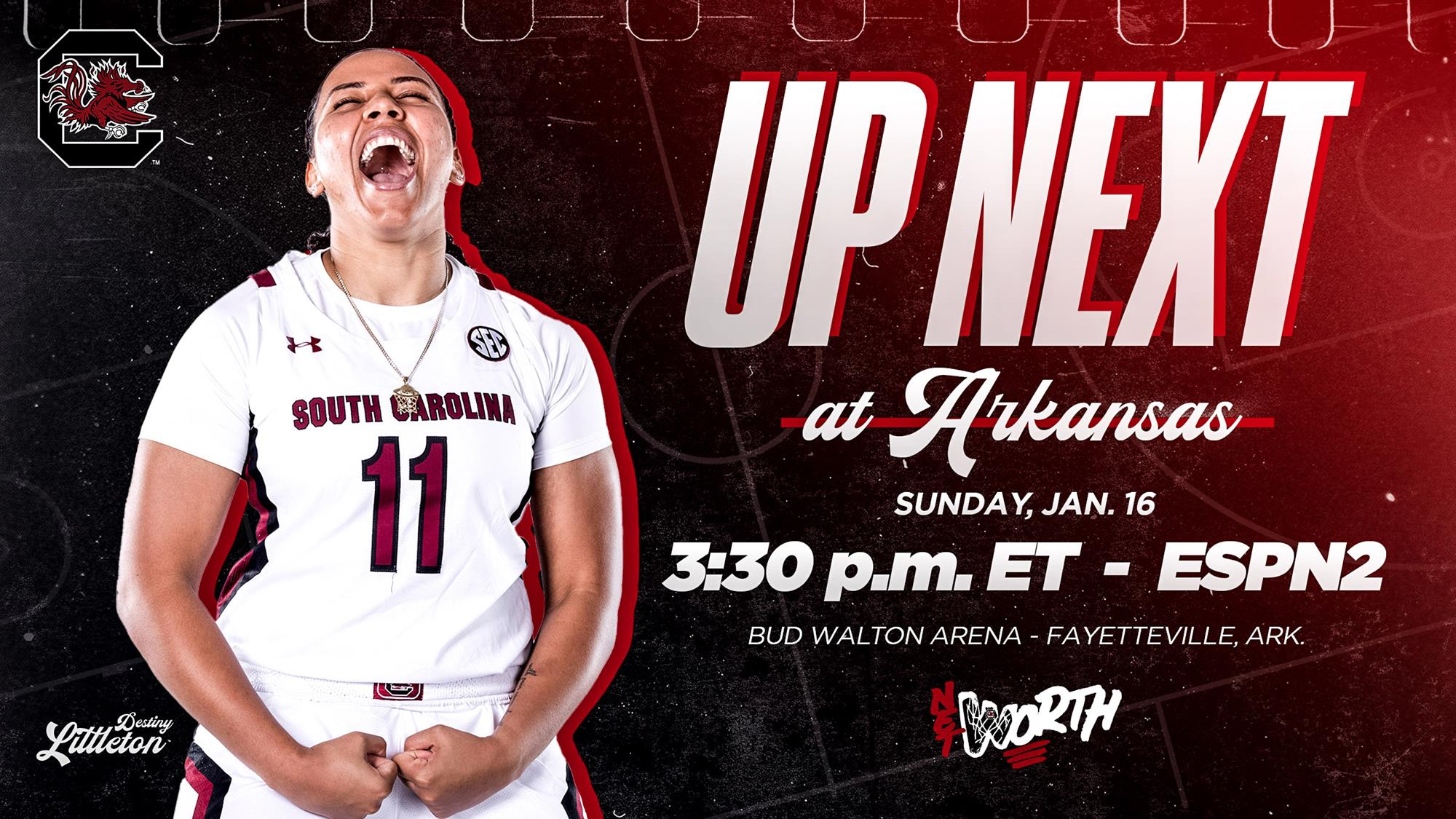 5 – Senior Destanni Henderson needs five points to become the third Gamecock this season to reach 1,000 in her career.

16 – The Gamecocks have out-scored an opponent by double digits in a quarter 16 times, including five third quarters.

16.6 – South Carolina’s 16.6 offensive rebounds per game rank eighth in the nation and have led to 16.7 second-chance points per game

The Arkansas Series
South Carolina is 22-18 all-time against Arkansas after winning 14 of the last 15 meetings, including the last four. The Gamecocks are just 8-10 against the Razorbacks in Fayetteville, though.

Under head coach Dawn Staley, South Carolina is 15-4 against Arkansas.

In the last meeting between the two teams, on Jan. 18, 2021, in Columbia, the Gamecocks celebrated the unveiling of the A’ja Wilson statue with a 104-82 victory over the Razorbacks. Then-sophomores Aliyah Boston and Brea Beal scored 26 and 22 points, respectively, as the South Carolina offense exploded for 54.1 percent shooting, including 65.8 percent in the second half to pull away after a 42-37 halftime score.

Road Ready
The Gamecocks are 280-260 all-time in road games, including a 105-46 mark under head coach Dawn Staley.  Her .695 winning percentage on the road is the best in program history.

Schedule Strength
South Carolina leads the country with eight games against nationally ranked teams, seven of which were in the AP top 15 at the time of the game. Wins in all eight of those games have the Gamecocks atop the NET rankings as well.

The Gamecocks’ non-conference schedule is rated third-toughest in the country and preceded an SEC slate that includes six games against conference rivals in this week’s national rankings.

All-Everything Aliyah Boston
From her career debut triple-double to becoming the only 2021 finalist for both the Naismith Trophy and Naismith Defensive Player of the Year, junior Aliyah Boston has spent two seasons on the national stage. In her third campaign, she is poised to rise to the top step.

Boston entered her third season as a two-time All-American and two-time Lisa Leslie Center Award winner. She averages a double-double for her career (14.0 ppg/10.6 rpg) while her 41 career double-doubles leads active SEC players and is tied for seventh in program history. In 36 career games against ranked opponents, her averages rise to 14.4 ppg and 11.8 rpg.

Boston is USA Today’s Preseason Player of the Year and a unanimous First-Team All-American. Dropping over 20  pounds since the start of her sophomore season, Boston was all about basketball this summer, helping the U.S. to gold at the FIBA AmeriCup and spending time training with NBA legend Tim Duncan.