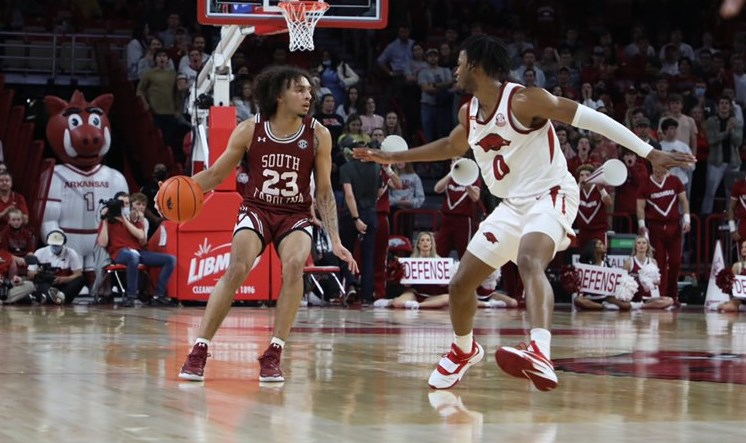 The Razorbacks trailed by seven points at halftime but opened the second on an 18-3 run, shooting 8 of 16 from the floor for a 51-41 lead. Au’Diese Toney scored six points and Williams added four during the stretch.

South Carolina missed its first 11 field goals after the break before Devin Carter’s jumper and later a free throw made it 51-46 with 10:25 left, but the Gamecocks didn’t get closer.

Toney finished with 13 points and Stanley Umude added 12 for the Razorbacks, who shot 15 of 30 from the floor in the second half and 27 of 33 (82%) overall from the free-throw line.

KEY STATS
> Devin Carter led all scorers with 20 points. It’s his second career game with 20 or more points. He scored 22 points against Army on Dec. 22.
> James Reese V was the other Gamecock with 10 or more points. Reese V scored 10 points for his 44thcareer game in double figures and his eight in a Gamecock uniform.
> Carter scored nine points in the final 3:25 of the first half to help Carolina end the opening half of play on a 10-2 run.
> The Razorbacks answered to start the second half with an 18-1 run themselves in the first 7:23 of play in the second half and regain the lead.
> The Razorbacks won the battle down low, outscoring Carolina 42-22 in the paint.

UP NEXT
> South Carolina returns home to face Georgia (5-12, 0-4 SEC) for another Saturday afternoon contest at Colonial Life Arena. Dave Neal (pxp) and Jon Sundvold (analyst) are on the call remotely for the 3:30 p.m. (ET) broadcast on the SEC Network.