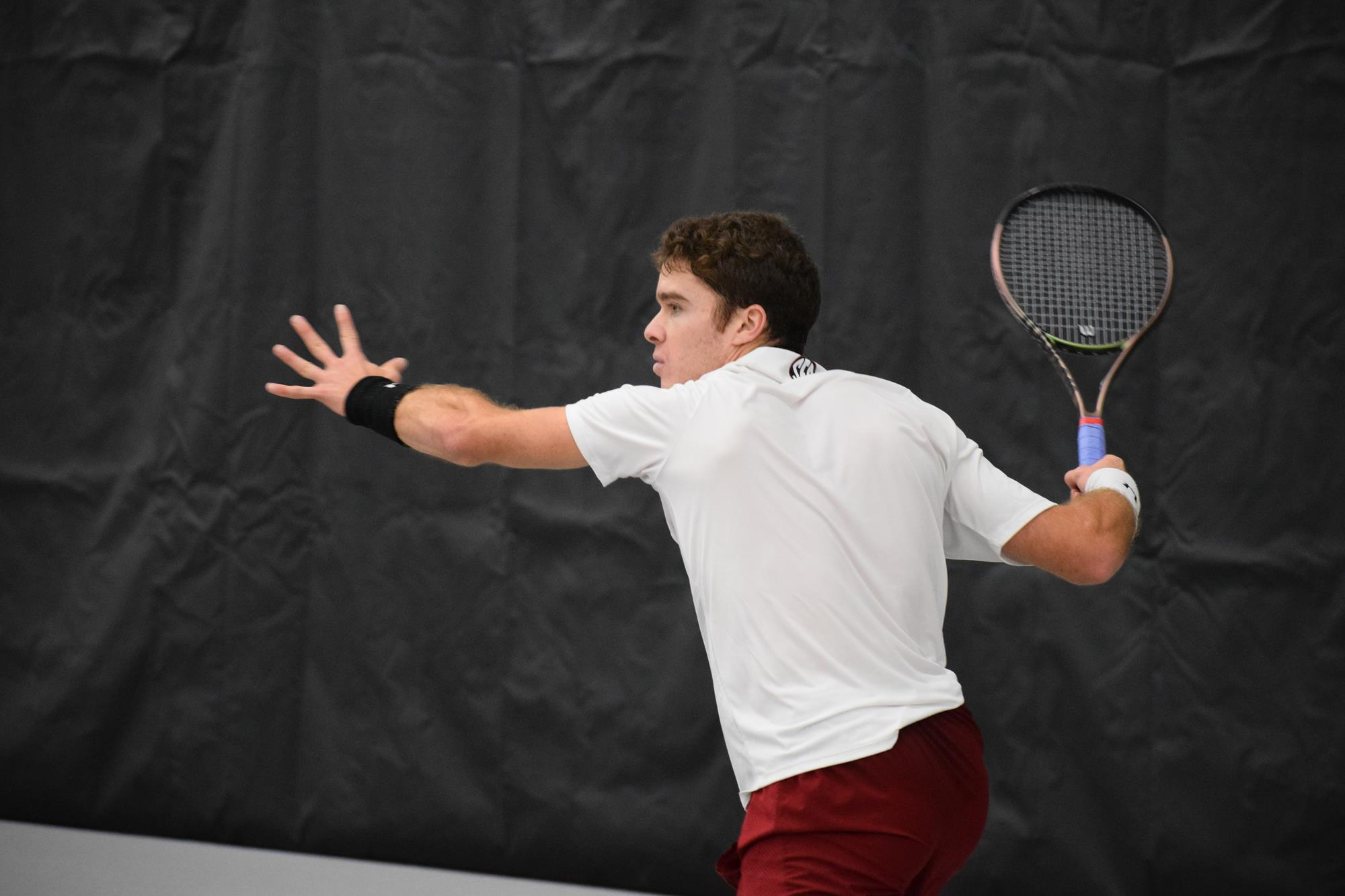 Gamecocks Remain Perfect on the Season

Columbia, S.C. – No. 13 South Carolina men’s tennis defeated Georgia Tech 5-2 to top its second ACC opponent of weekend. The Gamecocks dropped the doubles point for the first time this season but bounced back to win five singles matches to secure the victory.

“We came out a little flat, but every year Coach Kenny (Thorne) does a great job with their doubles,” said head coach Josh Goffi. “They’re a good doubles squad, but I think we were a little emotionally flat from having a good time on Friday night with the Clemson win, and you could see it when we walked in this morning from warm-ups. We did our best to get the guys going, but we paid our price with the doubles point. The beauty about that is this is the first time we’ve lost a doubles point all year, and we were able to use the break and our leaders got the boys to respond and come out pretty commanding.  I think we took all first sets on every court, and that’s a statement of being able to respond. First dropped doubles point of the year, and we responded, so I’m really happy with what the boys did today.”

South Carolina won the first doubles match on Court 1 with sophomore Connor Thomson and junior Daniel Rodrigues claiming the 6-3 win. The Gamecock duo is now a perfect 7-0 through the spring season. The other two doubles matches went in favor of the Yellow Jackets, giving them the doubles point.

In singles, the Gamecocks put up impressive numbers, winning five of the six matches, all in straight sets.

Junior Jake Beasley was the first to get the Gamecocks on the board. He won his first set by a commanding 6-1 score. In the second, he fell behind 1-3 but put up four unanswered games to turn the set in his favor 5-3. He allowed his opponent only one more game before putting the match away with a 6-4 score.

Thomson was next to clear his court. He defeated Keshav Chopra of Georgia Tech 6-4, 6-3 to give the Gamecocks a 2-1 lead.

Rodrigues scored the next point for the Gamecocks, defeating No. 9 Andres Martin 6-4, 6-4. Rodrigues came out dominant in the first set, going up 4-0 before allowing his opponent a game. Rodrigues stumbled a little, allowing Martin to bring the set back within one game, but was able to battle back and end the first set 6-4. The second set initially appeared more evenly matched with Martin striking first and Rodrigues trading games back-and-fourth. Rodrigues was able to secure the ranked win after putting the score up 5-4 and sending a powerful forehand that Martin couldn’t control.

It was sophomore Toby Samuel who clinched the match for the Gamecocks. He defeated Georgia Tech’s Marcus McDaniel on Court 2 7-6(4), 6-4 for the team victory.

Sophomore James Story got the final point of the day for the Gamecocks with his 6-3, 7-6(2) win over Angel Guerrero Melgar.

The Gamecocks will continue their non-conference schedule on Thurs., Feb. 10, at Carolina Indoor Tennis Center. No. 13 South Carolina will host No. 10 Wake Forest with first serve at 5 p.m.