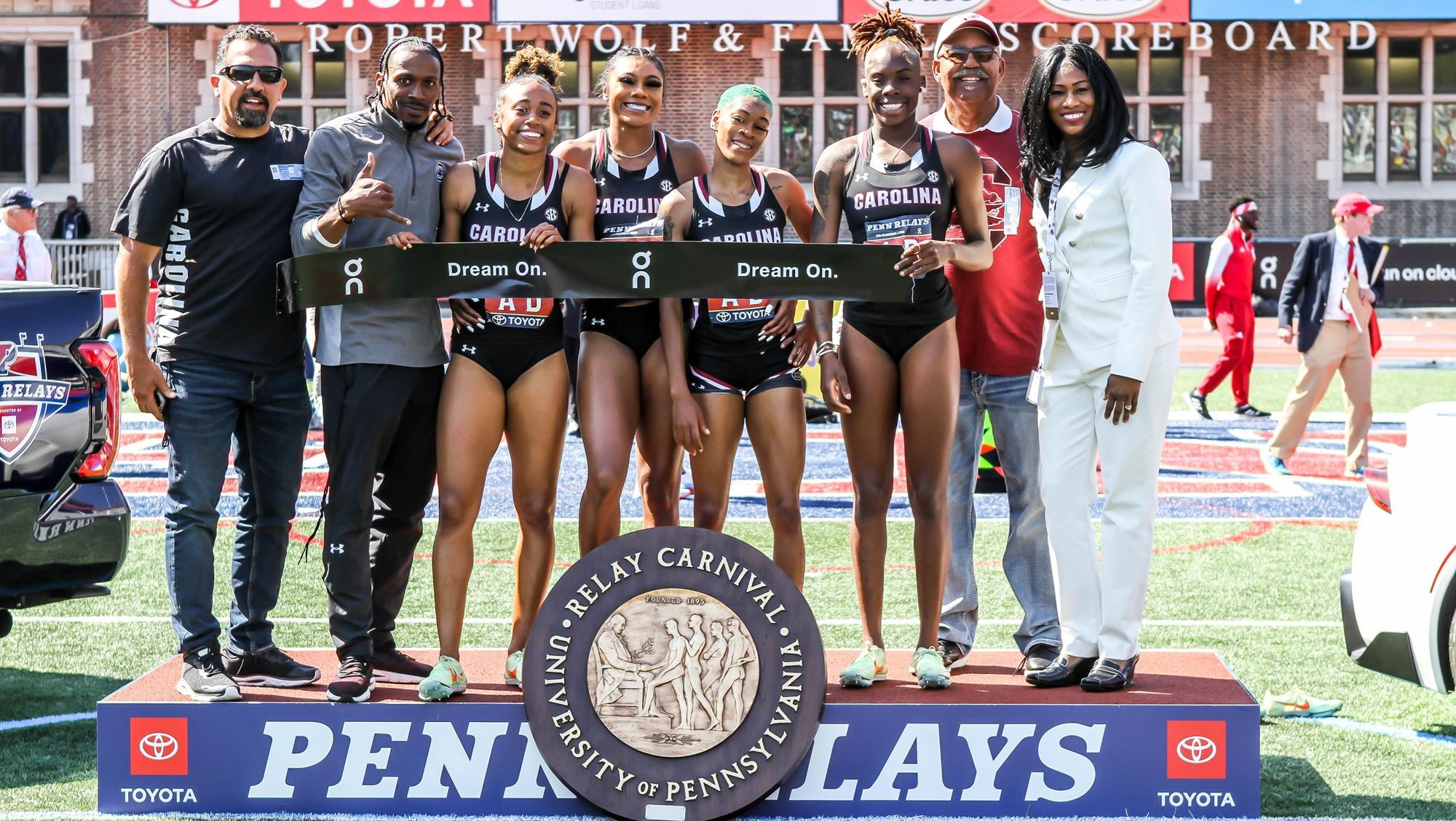 The Gamecock women completed a sweep of the sprint relay Championship of America titles on Saturday at Franklin Field in the 126th running of the Penn Relays.

PHILADELPHIA—The Gamecock women completed a sweep of the sprint relay Championship of America titles on Saturday at Franklin Field in the 126th running of the Penn Relays.

“The Mile relay got a win and the men ran one of the best times in school history,” said head coach Curtis Frye. “Evan Miller ran a 44.9 anchor leg. That’s a Carolina type anchor. We got a 7-1 performance from Jackson in the high jump. To come to Penn Relays and perform like that is awesome.

“Dylan had a good performance in the shot put and KD threw her season best. We know about the wins, and you can learn some things from it, but yesterday’s struggles led to today’s wins.”

Stephanie Davis, Makenzie Dunmore, Angel Frank and Jahnile Registre won the 4X400-meter relay handily with a time of 3:26.53. They clocked in the second-fastest time in school history and the third-fastest time in Penn Relays history.

The women’s 4X100-meter relay team of Jayla Jamison, Dunmore, Frank and Tierra Frasier were victorious with a time of 43.72. The victory marks just the third time in Penn Relays history the Gamecock women have won the 4X100-meter relay title.

“Jayla slipped out of her blocks a little yesterday, but she came back and ran like a champion today,” Frye said. “Then Makenzie ran like a beast. She had an Olympian next to her on the second leg and she knew that was the case. She took the stick and ran like an Olympian. I can’t say enough about Angel. She worked her way up to a scholarship and now ran great legs for us on both our relays today. Then Tierra gave us a great anchor leg.”

The women’s sweep of the 4X100-, 4X200- and 4X400-meter relays is the first from a women’s team since 2005 when the Gamecocks accomplished the same feat. The victory in the 4X400-meter relay also marks their second consecutive win in that event at the Penn Relays.

Rachel Glenn took home the title in the Championship section of the women’s high jump. She cleared 1.84m/6-0.50 for the victory. Glenn completes her regular season undefeated in the high jump.

The women’s 4X800-meter relay team finished as runners-up in the College division with a time of 8:49.38. Pearl Nagbe, Kieley Gayle, Alex Costantino and Grace Zamrowki’s time puts them at No. 2 in school history.

On the men’s side, Jackson Marseille had a standout performance in the high jump. Marseille cleared 2.17m/7-1.50 for a new personal best and a fourth-place finish. Marseille moved up to No. 5 in school history and into a tie for No. 15 in the NCAA this season. The clearance for Marseille marks the fourth time in his collegiate career he has cleared seven feet or higher.

The men’s 4X400-meter relay team of William Spencer Jr., Jackson Junkins, Doval Simmonds and Evan Miller ran the Gamecocks’ season-best time of 3:04.98. It’s a season best for Carolina by over two seconds and the performance makes it the 16th-fastest team in the NCAA this season.

Dylan Targgart had a top-five event finish in the men’s shot put. He tossed the shot 18.24m/59-10.25 to take fifth overall. Targgart’s mark would tie him for 51st in the NCAA this season, but he has thrown the shot put farther this season.

“We had a beast weekend,” Frye said. “The energy and excitement from our kids came out at the track meet. We talked about effort and how it’s more important where you finish. These kids gave their efforts today in front of 30,000 people.”

The Gamecock track and field squad now turns its attention to the SEC Outdoor Championships on May 12-14 in Oxford, Mississippi.