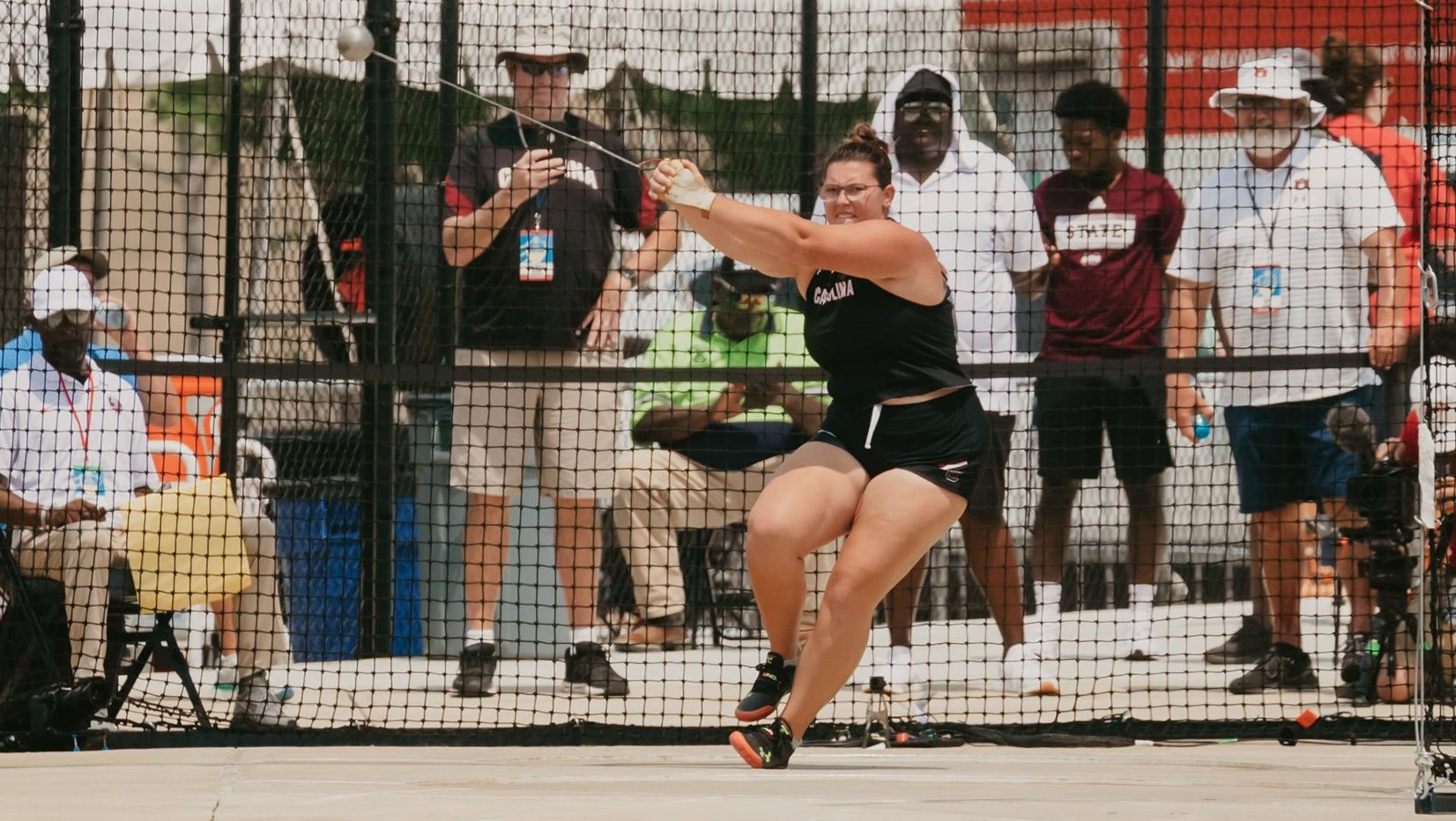 The South Carolina track and field teams kicked off competition at the SEC Outdoor Championships at the Ole Miss Track & Field Complex on Thursday.

“On our women’s side, we had a good day,” said head coach Curtis Frye. “KD got us on the scoreboard, which was a really big surprise for us. She was hyped up last night and went out and had four personal-best throws. That really got us off to a good start. Jayla in the 200, making the final is great and we’re excited about our young kids. Rachel had the fifth-fastest 400-meter hurdle qualifying time.

“Elisha Brooks is in good position after one day in the decathlon. He is in fourth after finishing seventh last year. If he can hang on and fight it out, he can get in the top five with a personal best. Some of his best events are tomorrow, particularly the hurdles. Evan Miller had a lifetime best in the 200 meters. We had some struggles, but we were competitive.”

KD Young kicked off the meet with a scoring performance in the women’s hammer throw. She tossed the hammer 60.41m/198-2 to take seventh overall. Young became the fourth Gamecock in school history to break the 60-meter mark in the women’s hammer throw. Young’s throw is the fourth-best in school history and improves her Regional qualifying position to No. 35 in the East Region.

Jayla Jamison made the 200-meter final. She ran a time of 23.24 to take eighth overall in the 200-meter prelims. Jamison’s performance sends her to her first career SEC final.

Rachel Glenn ran in the 400-meter hurdles and qualified for the final on Saturday. She finished third in her heat with a time of 56.78 to earn an automatic qualifier. Glenn is also slated to compete in the women’s high jump on Friday.

On the men’s side, Evan Miller earned a bid to the 200-meter final, finishing as the second-fastest qualifier in prelim action. Miller ran a personal-best time of 20.39 to win his heat and advance. Miller’s time puts him at No. 3 in school history and is tied for 21st in the NCAA this season.

Elisha Brooks kicked off his decathlon competition and sits in fourth after the first five events. Brooks set personal bests in the 100 meters, shot put, long jump and 400 meters. Brooks’ day included a victory in the 100 meters with a time of 10.45, which is the fastest 100-meter time from a Gamecock this season.

Friday’s action is set for a 2:45 p.m. start with the continuation of action in the decathlon. Friday also is set to have a handful of field events and prelim action on the track.

“We’re looking forward to everything we’ve got going tomorrow,” Frye said. “We’re looking forward to Filip and Destinee in the hurdles. We think Jayla has a good shot to make the 100-meter final as well. Rachel is in the high jump tomorrow and we like our men’s high jumpers, too. We’re excited for the men’s shot put and men’s pole vault. We’ve got a lot that we feel good about.”