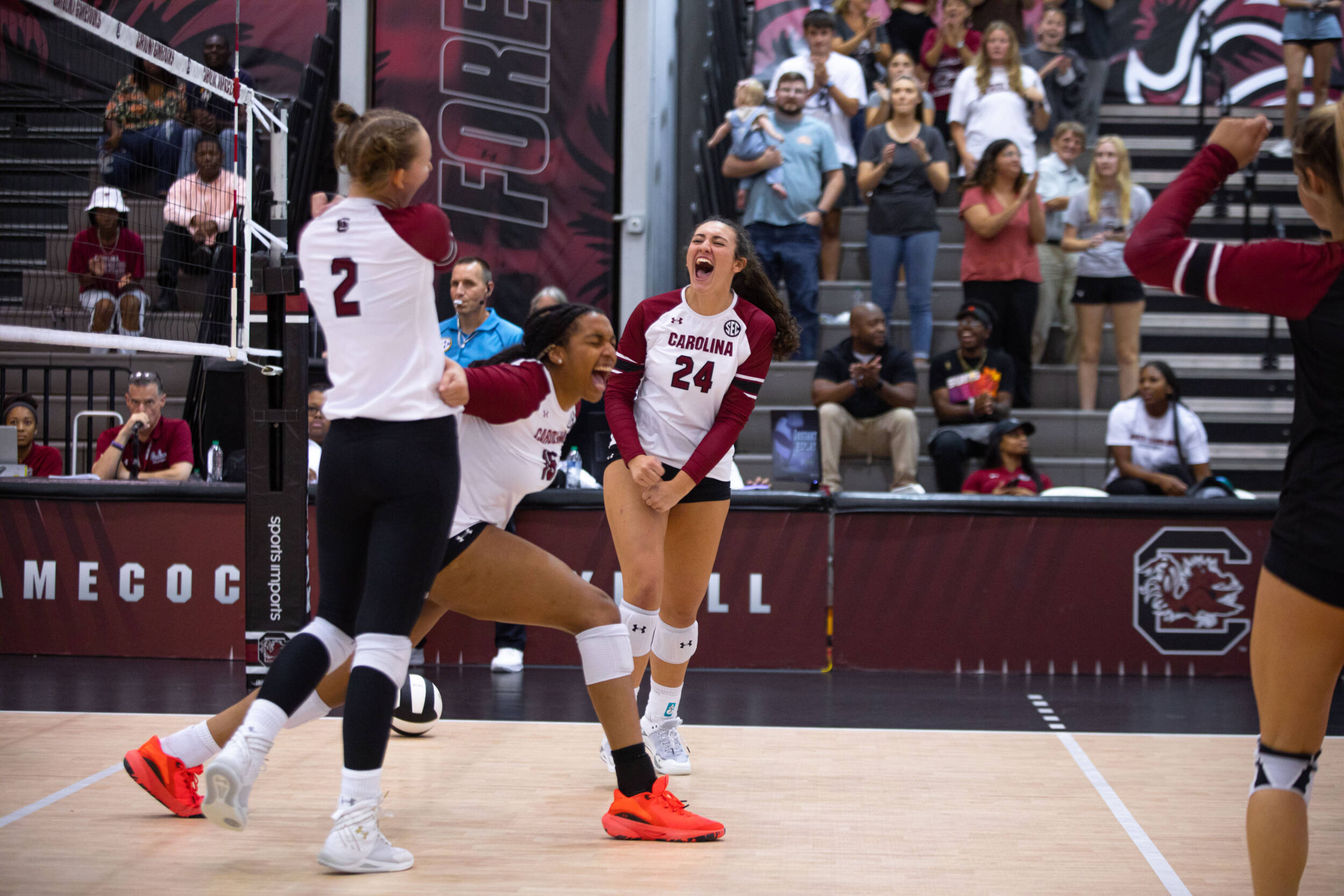 CORAL GABLES, FLA. – South Carolina volleyball has two chances to pick up not only its first road win of the fall, but a quality road win as it heads to South Florida for the Hurricane Invitational. The two-day event begins Friday at 6 p.m. against host Miami (7-2), then the team faces its first ranked foe of 2022 when it takes on No. 20 Oregon (4-2). Friday’s match will air on the ACCNX, Saturday versus the Ducks will have a video stream.

SCOUTING THE HURRICANES
​Miami completed the UCF Invitational last weekend and dropped their first two matches of the young season. The Hurricanes lost, 3-1, to UIC and a heartbreaker in five sets to UCF, before defeating UNC Wilmington to end the weekend. Miami is primed with new faces, with eight total true freshmen on the roster. Junior Angela Grieve leads a three-woman attack, both her, freshman Flormarie Heredia Colon and sophomore Peyman Yardimci average three or more kills per set and all three are efficient hitters as well, helping the team rank 30th nationally with a .275 combined hitting percentage. On defense, Miami ranks in the top half of the ACC for blocks per set (2.42) and opponent hitting percentage (.177). Middle Janice Leao averages just over a block per set while also hitting .418 on the offensive side.

SCOUTING THE DUCKS
​No. 20 Oregon lost both matches last weekend, to No. 3 Minnesota and No. 20 Penn State, in the Pac-12/Big Ten Challenge out in Minneapolis, ending its 4-0 start to the season. The Ducks are a veteran team, with only three true freshmen on the roster. Senior outside hitter Brooke Nuneviller led the way for the Ducks with 37 kills across nine sets over the weekend, redshirt junior Hannah Pukis tallied 71 assists (47 vs Penn State). Freshman outside hitter Mimi Colyer emerged as a go-to secondary option in the Ducks offense, tallying 83 kills this season, second on the team behind only Nuneviller. Oregon has improved its wins total in three consecutive seasons, including an NCAA tournament berth last season.

Ruprich spearheaded a stalwart net defense for South Carolina in its weekend sweep of a series against the Bearcats, Ruprich averaged 2.67 blocks per set and South Carolina as a team held Cincinnati to a weekend hitting percentage of just .165. On Friday night in the opening match-up, Ruprich recorded nine blocks in a 3-0 sweep, with four of the nine blocks coming on solo stuffs. Her nine total blocks match the program’s rally-scoring era record for a three-set match. The total has been reached four times total, three of the four times are by Ruprich. Her four solo blocks ties her with four other Gamecocks for the second most solo blocks in a three-set match in the rally-scoring era.

In the Saturday rematch, she would be equally impressive, adding seven more blocks as South Carolina limited Cincinnati to set scores of 18, 14 and 14. Ruprich reached 40 blocks for the season in just seven matches played and currently leads the SEC and ranks seventh nationally with an average of 1.67 blocks per set. Not to be overshadowed was her weekend as an attacker; Ruprich hit .500 with 13 kills on just 20 swings over the two wins. She ranks second in the SEC and 10th nationally with a hitting percentage of .447 so far in 2022.

PAIR OF TRANSFERS MAKING AN INSTANT IMPACT
Along with a quartet of true freshmen, South Carolina’s coaching staff added a veteran presence to the roster for the fall. Joining the Gamecocks are graduate transfers Jenna Hampton (Penn State) and Dalaney Hans (Georgia) who combined for 182 games played at their former schools.

Hampton made the AVCA all-region team and was second team All-Big 10 last fall as the libero for the Nittany Lions, leading the Big 10 with 4.83 digs per set. Her reputation up north followed her to Columbia, as she represented the team on the SEC coaches’ preseason all-conference team released in July. So far this season, she’s as good as advertised, leading the team with 4.18 digs per set and set a career high at Clemson with 31 total digs.

Hans is staying in the SEC for her new squad, coming from Georgia where she played in 70 matches. She enjoyed her best seasons in the final two campaigns in Athens, combining for 784 assists and 259 digs in 157 sets between her junior and senior seasons. Working alongside Claire Wilson at setter, Hans averages 5.18 assists per set, is second on the team behind Hampton with 49 digs and leads the team with 10 service aces.

IT JUST MEANS “MOOR”
As head coach Tom Mendoza said postgame on Friday, Aug. 26, “Kenz had one of the better days as an attacker that you could possibly ask for.” Senior McKenzie Moorman totaled 42 kills and a .478 hitting percentage over the team’s three wins in week one. Dating back to 2001, the beginning of the rally-scoring era, only five other Gamecocks had 40 or more kills in the first three games of a season, but none of their hitting percentages come close to Moorman’s .478 clip. Nationally, Moorman’s hitting percentage ranked 31st in Division I, but no other individual ahead of her had more kills.

GAMECOCK NATION PACKS THE GYM
Gamecock fans are out in full force to start the season, with sellout crowds in three of the first five home games of the season. Currently, South Carolina ranks 24th nationally in average attendance (1,279) and 19th in total attendance (6,393). Those numbers each rank fourth among SEC schools, despite Carolina playing in one of the few volleyball-only facilities in the conference. Dating back to 2014, the Gamecocks volleyball program is averaging at least 1,000 fans per game every season.

SOPHOMORE TRIO READY TO BUILD OFF YEAR ONE
South Carolina’s success in 2021 was thanks in large part to the immediate impact of its freshman class, most notably setter Claire Wilson, pin hitter Lauren McCutcheon and defensive specialist Morgan Carter. Wilson and McCutcheon were the only two Gamecocks to play in every set last fall, and Carter worked her way into the main libero role – the first freshman in program history to serve as the full-time libero. Both McCutcheon and Wilson missed time in the spring and summer due to injury, but the trio’s overall growth from freshmen to sophomores will undoubtedly be a major factor in the team’s success again this fall.