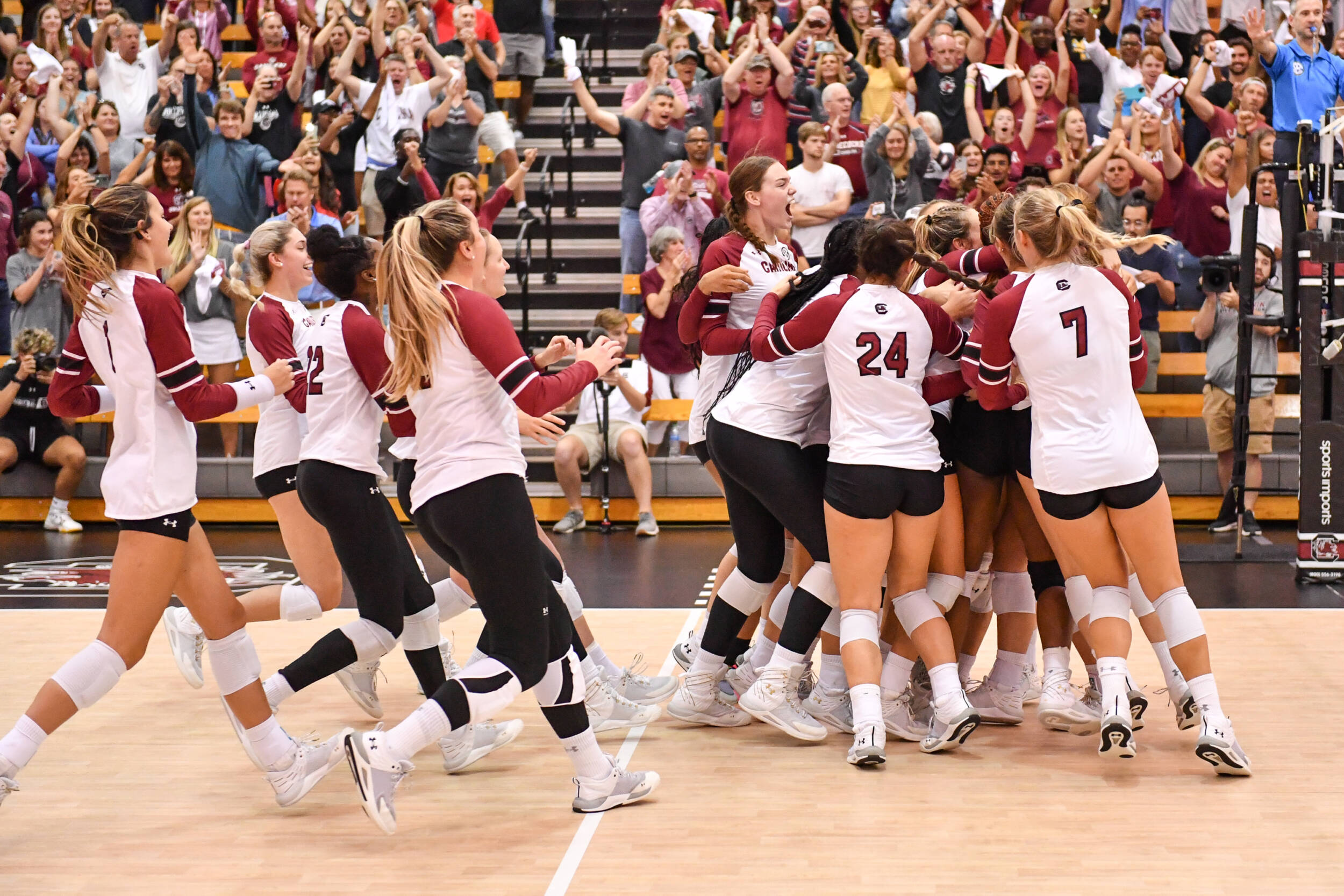 Gamecocks Bite Back With Five-Set Win Over No. 12 Gators

COLUMBIA, S.C. – South Carolina (7-5, 1-1 SEC) rallied from a 2-1 deficit to notch its first ranked win of the season, taking down No. 12 Florida (10-3, 2-1 SEC) in five sets on Sunday afternoon. The two sides traded blows all game, but the Gamecocks saved their best set of the weekend for the fifth. Riley Whitesides recorded four of her team-high 16 kills in the final frame and the Gamecock defense piled up a season-high 18 blocks against the Gators.

1st SET: The opening game was competitive early, but Florida closed out strong in a 25-20 score thanks to a five-block showing from its defense. The Gamecocks hit just .029 with nine total kills in the set, three apiece from Whitesides and McKenzie Moorman . At the midpoint of the set, South Carolina drew within one, 14-13, but Florida used a quick 3-0 run to put the game out of reach and never led by less than three points the rest of the way.

2nd SET:  South Carolina’s defense had its say in set two, cutting Florida’s kill total almost in half from set one to win 25-21 and level the match. The back line set the tone, with 15 total digs for the Gamecocks with Jenna Hampton’s five leading the way – the libero had 12 of her game-high 18 digs in the first two sets alone. The home side took the lead early and weathered two rallies from Florida to wrap up the game, the second coming after the Gators tied the score at 20 and Carolina reeled off four unanswered points.

3rd SET: Florida snatched momentum back quickly with a decisive 25-17 win in the third to push back ahead 2-1 in sets. South Carolina had eight attacking errors and just seven kills in the game, negating a solid performance from middles Oby Anadi and Ellie Ruprich – who combined to have a hand in all five of the team’s blocks in the third.

4th SET: The fourth set would be the tightest of the day, with 12 ties and five lead changes before the Gamecocks came away with a 25-22 win to even the sets. The offense played its cleanest set, out-hitting Florida .364 to .231 with the trip of Whitesides, Moorman and Lauren McCutcheon each racking up three kills. The teams traded modest runs early, Florida went ahead 12-9 but were soon answered by a 4-0 Gamecock run that was punctuated by a block from Anadi and McCutcheon. Tied at 19, South Carolina got some breathing room with three of the next four points and the Gators weren’t able to answer one last time. 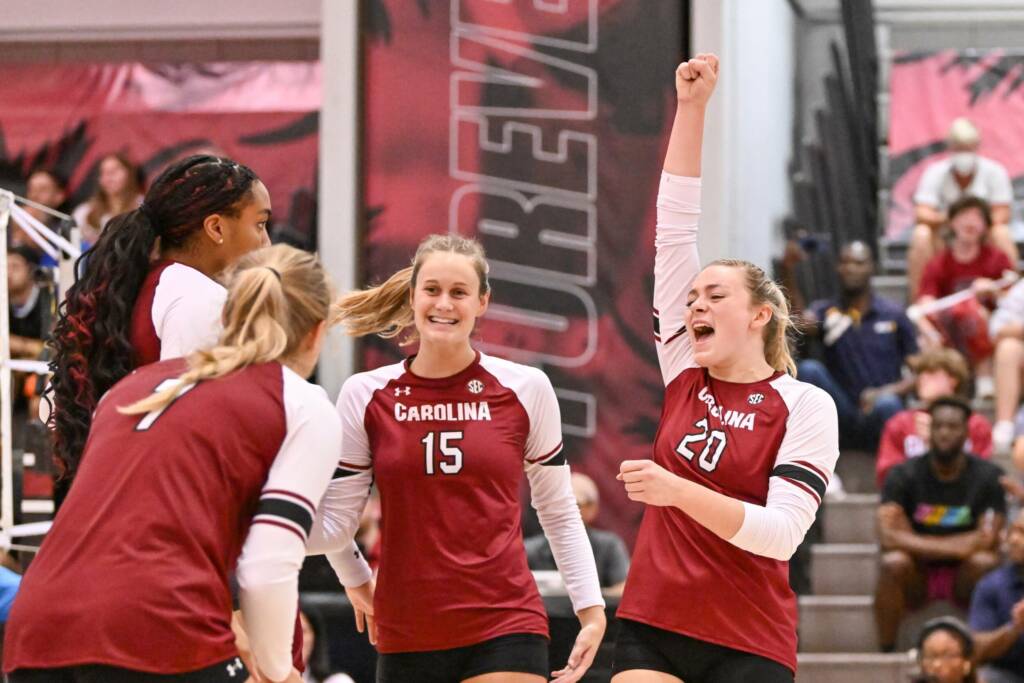 5th SET: South Carolina left little doubt in the fifth set, picking Florida apart behind the service line. The Gators took a 4-2 lead, but after a McCutcheon kill got the team a side-out, Claire Wilson helped the team score the following six points with no answer from the Gators. The sophomore dropped in two aces and Ellie Ruprich teamed up for a pair of blocks in the game-breaking run. Florida was finally able to end that outburst, only to have another start thanks to the effective serving from Camilla Covas. She piled on with a 5-0 run of her own with Whitesides picking up four kills among those five points, and the Gamecocks closed the match with a 15-7 romp.

The Gamecocks have arrived! 🐔

QUOTABLE
Head Coach Tom Mendoza on the team’s serving success in the match
“It took our offense a little bit of time to get going, obviously part of that is the things that Florida was doing and how they were able to disrupt us and put pressure on us and make us pay when we weren’t doing those things. It was a very clear ‘hey, when we’re doing the right things we can score, but as soon as we let up Florida is going to make us pay’, so it was a great lesson for us. I think our team both nights learned from that, what’s working, what’s not working, and were able to play better as the night went on. Huge win for the resume and SEC and all that, very excited for our team. It gives us that sense of, if we can control our side we can beat anybody and we believed that before today, but it’s always nice to have one of these matches where you can point to it and show that.”

UP NEXT: The team continues its stretch of five games in eight days when it travels to Athens for a midweek matchup with Georgia on Wednesday, Sept. 28. The match with the Bulldogs will be a national broadcast on ESPNU. Follow @GamecockVolley on Twitter for updates on the team.