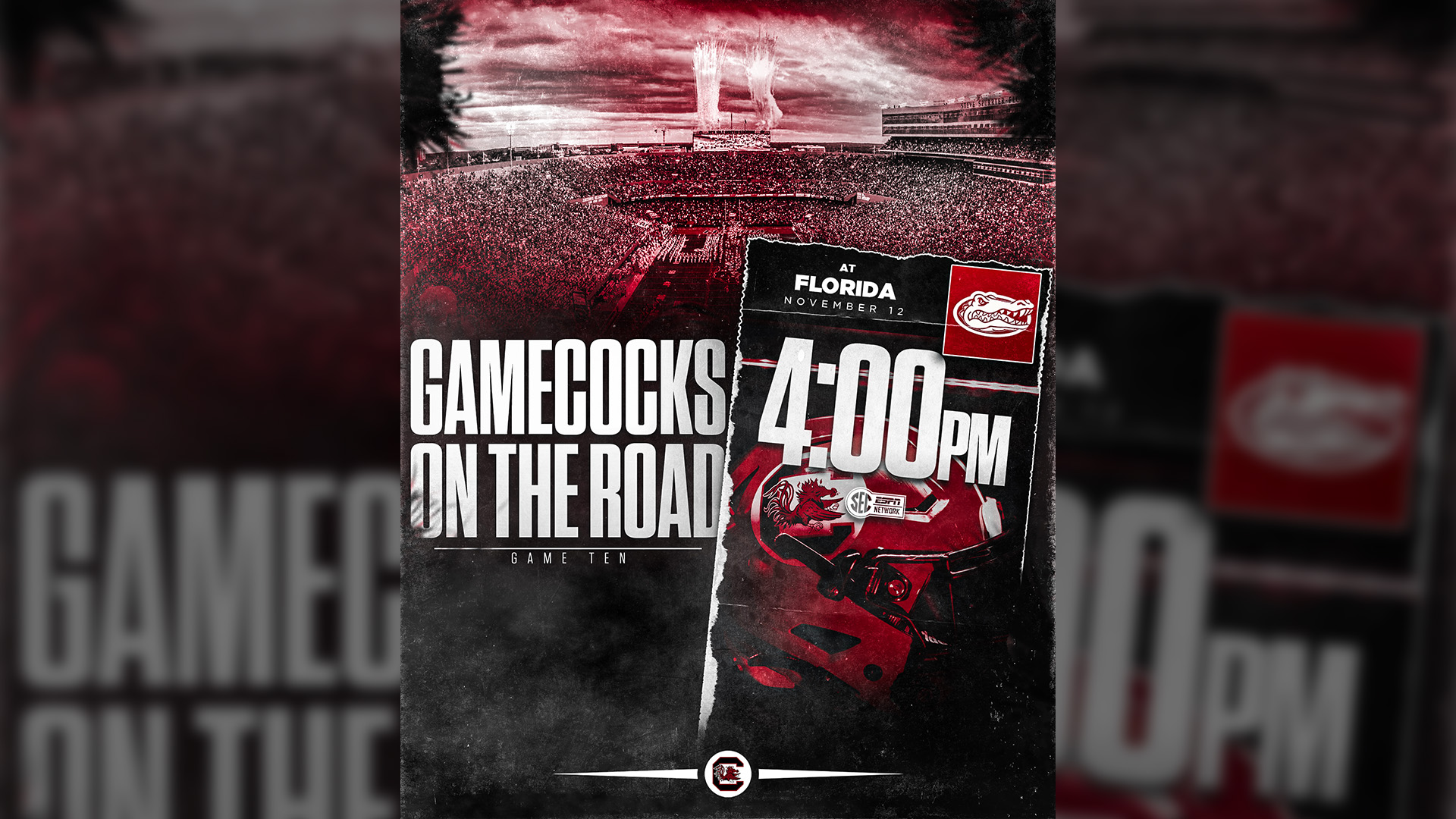 Gamecocks Travel to The Swamp for a Saturday Showdown with Florida

OVER THE AIRWAVES: This week’s contest will be televised by SEC Network. Taylor Zarzour (play-by-play) and Matt Stinchcomb (analyst) will be in the booth while Alyssa Lang works the sidelines for the network. The Gamecock Radio Network features Todd Ellis as the play-by-play voice with Tommy Suggs providing the color commentary. Jamar Nesbit patrols the sidelines for the radio network.

GAMECOCK REWIND: The Gamecocks opened the season with a non-conference win over Georgia State, then dropped a pair of SEC contests to ranked opponents, first at No. 16 Arkansas, then at home to top-ranked Georgia. The Gamecocks then put together a four-game winning streak, their longest since winning six in a row to end the 2013 season, including back-to-back conference wins at No. 13 Kentucky and at home versus preseason top-10 Texas A&M. After a home loss to Missouri, the Gamecocks bounced back with another road win at Vanderbilt last week, their fifth win in six games, becoming bowl-eligible for the second-straight season under head coach Shane Beamer.

ROAD WARRIORS: The Gamecocks are coming off wins in each of their last two SEC road games, winning at Kentucky and at Vanderbilt. It’s the first time they’ve won back-to-back SEC road games since the 2012 campaign when they won at Vanderbilt and at Kentucky in consecutive road contests. The last time Carolina won three-consecutive SEC road games came in 2011 when it won at Georgia, at Mississippi State and at Tennessee en route to an 11-2 campaign. The Gamecocks have won two road games in 2022, their high mark since 2018. They haven’t won three road games since the 2013 season.

FRESHMAN OF THE YEAR CANDIDATE: South Carolina safety Nick Emmanwori is one of 14 semifinalists named for the 2022 Shaun Alexander Freshman Player of the Year Award, as presented by the Maxwell Football Club. Emmanwori, who leads the Gamecocks in tackles, was named to the Midseason True Freshman All-America first-team unit as selected by both On3 and by CollegeFootballNews (CFN).

A LITTLE HISTORY: 2022 marks the 129th season of intercollegiate football at the University of South Carolina, dating back to 1892. It is the 116th-consecutive year in which Carolina has competed on the gridiron. The University did not field a team in either 1893 or 1906. Carolina owns an all-time record of 627-604-44, a .509 winning percentage. 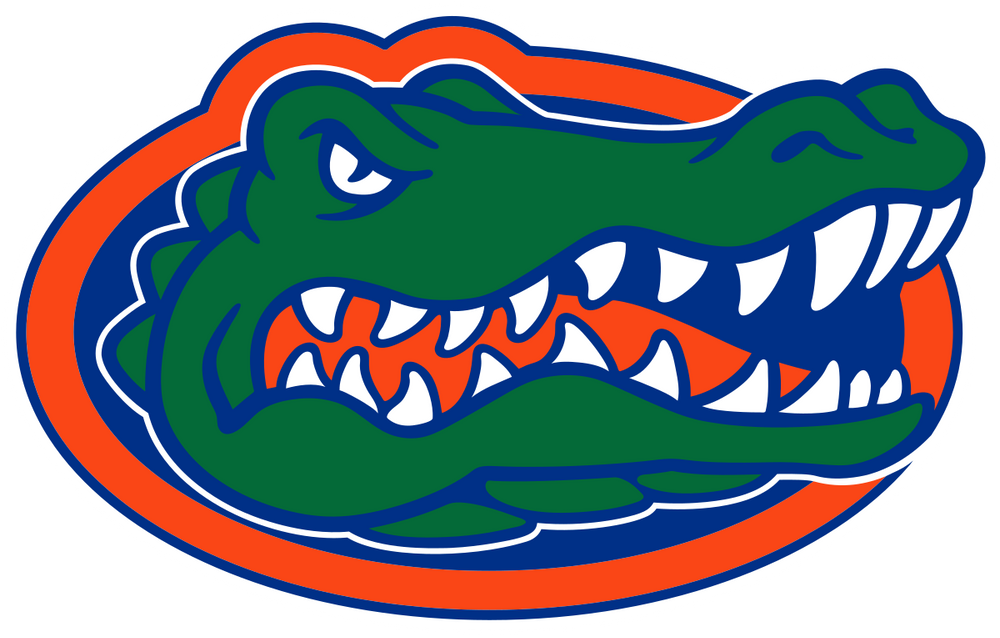 This is the 43rd meeting between South Carolina and Florida in a series that dates back to 1911. The Gators lead the all-time series, 29-10-3, including a 16-2 advantage in Gainesville and a 12-7-1 lead when playing in Columbia. The teams have also met three times at a neutral site with Florida winning once and the other two games ending in a tie. The teams have split the last 12 contests evenly after Florida dominated a stretch when they won 18 of 19 games from 1964-2009.

JUST GETTING WARMED UP: The Gamecocks have split the last 12 gridiron battles with the Gators evenly after winning just four of the first 30 meetings between the two schools.

THE LAST TIME THEY MET: South Carolina scored its most points in the series and had its largest margin of victory in a 40-17 win over Florida in Columbia on Nov. 6, 2021. First-time starter Jason Brown threw for two TDs, Kevin Harris and ZaQuandre White each rushed for over 100 yards and South Carolina’s defense held the Gators’ attack to just 82 yards rushing in the win. Parker White booted a career-best four field goals and defensive tackle Jabari Ellis added an 18-yard fumble recovery for a touchdown in the rout. Carolina scored 10 first-quarter points and added 20 more in the second stanza to open up a 30-10 halftime advantage and never looked back. For more on that contest, please turn to page 8 of these game notes.

THE LAST TIME THEY MET HERE: South Carolina ventured into the Swamp on Oct. 3, 2020 and dropped a 38-24 decision to the No. 3/3 Florida Gators. Statistically, the game was closer than the final score indicates, as the Gators gained just 19 more total yards (348-329), while the Gamecocks had more first downs (25-18) and ran 30 more plays (83-53) while controlling the clock for 36:23. Sophomore running back Kevin Harris reached the 100-yard rushing mark on 22 carries in the contest. For more on that contest, please turn to page 9 of these game notes.

THE LAST CAROLINA WIN IN THE SWAMP: In one of the more improbable comeback wins in school history, the Gamecocks pulled out a 23-20 overtime decision in The Swamp on Nov. 15, 2014. In a defensive struggle that saw the teams combine for just 579 yards of offense, it was special teams that made the difference. Trailing by seven in the fourth quarter, the Gamecocks got a blocked field goal from Gerald Dixon Jr., then a blocked punt from Carlton Heard, setting up a Mike Davis game-tying touchdown with just 12 seconds left in regulation. In the overtime, Florida scored first on a 35-yard field goal, then Dylan Thompson sprinted in from four-yards out to give Carolina the win. That victory would be the last in The Swamp for SEC legend Steve Spurrier.

SCORING POINTS: Carolina has tallied at least 24 points in each of its last five meetings with the Gators after being held below that threshold in each of the previous six contests. Ironically, despite scoring more, they are just 2-3 in the last five games after splitting the previous six games evenly.
ONCE A GATOR: Carolina defensive backs coach Torrian Gray coached the Gator cornerbacks in 2019 and 2020. University of South Carolina Director of Football Operations George Wynn held a similar position at Florida from 2011-17.

ONCE A GAMECOCK: Florida outside linebackers coach Mike Peterson spent six seasons a member of the Carolina coaching staff, serving as the outside linebackers/defensive ends coach from 2016-21 under both Will Muschamp and Shane Beamer.

THE LAST TIME OUT: South Carolina put up 17 first-quarter points, had a season-high 31 points in the first half, and never looked back in a 38-27 win at Vanderbilt last Saturday night. It was the Gamecocks’ 14th-straight win over the Commodores.

SPENCER WAS SOLID: Quarterback Spencer Rattler had a solid performance in the win at Vanderbilt, completing 18-of-26 passes for 200 yards and a season-high three touchdowns with no turnovers. His TD passes were from 29, 19 and 17 yards out.

THE JUICE WAS LOOSE: Antwane “Juice” Wells Jr. continues to put up big numbers for Carolina. The James Madison transfer caught four passes for 110 yards and two scores in the win at Vanderbilt. He had a 68-yard catch-and-run for a score from Dakereon Joyner and a 17-yard TD reception from Spencer Rattler. It was Juice’s second 100-yard receiving game of the season.

BELL IN THE BACKFIELD: With MarShawn Lloyd sidelined with a deep thigh bruise, Jaheim Bell spent the week in the running backs room and responded in a big way with 16 carries for 56 yards in the win at Vanderbilt. He entered the contest with just 19 carries all season. He also caught three passes for 27 yards against the Commodores.

CROSSING THE CENTURY MARK: Wide receiver Josh Vann caught three passes for 32 yards against Vanderbilt, giving him 101 catches for his career. He became just the 20th Gamecock in school history to reach the 100-career reception plateau. His 100th catch was a beautiful 19-yard TD reception from Spencer Rattler.

JOYNER JOINS IN: Dakereon Joyner, the MVP of the 2021 Duke’s Mayo Bowl win over North Carolina, threw his first pass in a game against Vanderbilt since his bowl heroics, completing a 68-yard TD pass to Juice Wells. Joyner has completed his last 10 passes for 228 yards with two touchdowns.

GUY KROEGER: Kai Kroeger continues to show why he is one of the top punters in the nation and a five-time Ray Guy’s “Ray’s 8” honoree this season. He booted five punts against Vanderbilt for a 53.6-yard average, including kicks of 69 and 66 yards, with two of his punts downed inside the 20, earning co-SEC Special Teams Player of the Week honors. Kroeger, who is also the holder on placements, completed a 16-yard pass on a fake field goal for a first down, and is now 4-for-4 in his career passing.

STILL PERFECT: Junior placekicker Mitch Jeter connected on a 31-yard field goal late in the first quarter in Saturday’s win at Vanderbilt. He is now a perfect 9-for-9 in field goals this season (and in his career). Jeter is one of 10 placekickers in the FBS who has yet to miss a field goal attempt this season.

FOR STARTERS: Running back Christian Beal-Smith and safety B.J. Gibson both made their first start of the season and the first start of their Gamecock careers last week against Vanderbilt. The Gamecocks have used 40 different starters on offense (19) and defense (21) this season, ranking in a tie for seventh in the FBS in number of players making starts this season.

THEY COME TO SEE THE GAMECOCKS PLAY: South Carolina has sold out all five of its Saturday home games this season, generating crowds of 78,297 in the season opener against Georgia State, 78,212 against top-ranked Georgia, 77,982 versus Charlotte, 77,837 against Texas A&M and 77,578 last week versus Missouri. The only home game not sold out this season was the South Carolina State game, which was moved from Saturday to Thursday earlier that week due to Hurricane Ian. The Gamecocks rank 16th in the country in average attendance at 75,243.

TURNOVERS WIN GAMES: After recording just one takeaway through the season’s first three games while posting a 1-2 record, Carolina recorded 10 turnovers in its next four contests, all wins. South Carolina recorded back-to-back three-interception games against Charlotte and South Carolina State, marking the first time since 2013 that they recorded three INTs in back-to-back games. They did not force a turnover in the loss to Missouri., but came up with four turnovers against Vandy. The Gamecocks are 5-0 this season when winning or breaking even in the turnover battle and 1-3 when committing more turnovers.

MISSING YOU: The Gamecock defense was hit hard by the injury bug early in the season, but are as close to healthy right now as they’ve been since game one. A pair of starters in edge rusher Jordan Strachan and linebacker Mohamed Kaba suffered season-ending ACL injuries at Arkansas. Defensive back David Spaulding is likely out for the remainder of the season with a foot injury. Edge rusher Terrell Dawkins underwent knee surgery after the Georgia game and has been out since then, but is getting closer to making a return to the field.

LOOKING AHEAD: The Gamecocks continue their “Orange Crush” stretch when they host the Tennessee Volunteers in the final home game of the 2022 season next Saturday, Nov. 19. The Vols hold a 28-10-2 advantage in the all-time series, but just a 10-7-2 lead when the game has been played in Columbia. UT has won the last three in the series, including a 45-20 win in Knoxville last season.