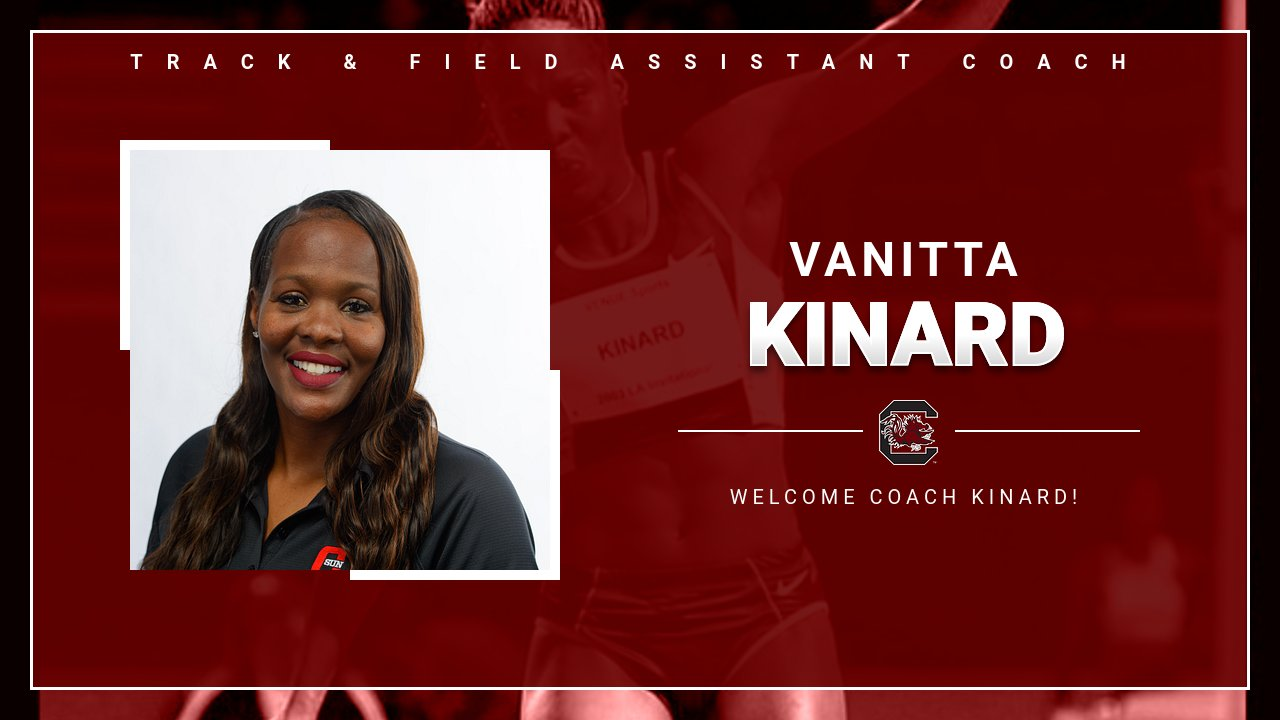 “Coach Kinard is impactful in many ways,” stated South Carolina Track & Field Head Coach Curtis Frye. “She is exactly what our team needed at this point. Someone who has been an All-American, National Champion and a United States Champion. She has coached at many Power Five schools and is a parent of a successful track athlete. All of the things that young athletes look for, Coach Kinard has accomplished. She also brings a strong skill set as a coach, having coached 15 All-Americans as well as a few national champions. She has coached both men and women to the highest level and she is still influencing athletes that are jumping on a U.S. World Championship team.”

Kinard brings to South Carolina a pedigree of winning, having been a part of three Power Five staffs that include a team national championship, a conference team championship and multiple All-Americans under her watch.

“It is such an honor to be under the tutelage of such an experienced leader and trailblazer to the sport of track and field,” stated Kinard. “I look forward to being a part of the legacy here at South Carolina.”

Kinard has spent the last three seasons coaching at Cal State Northridge where she worked with the Matadors’ jumpers. Under her guidance, CSUN’s Mathieu Tshani (a native of France) won the 2021 Big West Championship in the men’s triple jump and finished third in the long jump.

A former world-class track & field athlete, Kinard has nearly 25 years of coaching experience under her belt. With the Matadors, she also served as a recruiting coordinator and talent scout, as well as worked closely with compliance and handled the team’s travel and itinerary.

Prior to her time at CSUN, Kinard worked with the sprinters, hurdlers, multis and the jumpers at Michigan State (2012-16). During her time with the Spartans, Kinard’s student-athletes scored 29 points in the Big Ten Championship in 2014, allowing the women’s program to win its first Big Ten title since 1982. Kinard coached Tori Franklin who finished fifth at the NCAA Division I Outdoor Championships in the triple jump and was a repeat champion in the Big Ten Indoor Championship triple jump. This past summer, Franklin became the first American women to ever medal in the triple jump at World Athletics Championships when she took bronze with a mark of 14.72m (48-4).

No stranger to the Southeastern Conference, Kinard spent four seasons at Ole Miss (2008-2012) where she helped two triple jumpers to All-American honors and one who earned SEC All-Freshman team recognition in 2011. In her first season with the Rebels, Kinard helped coach a triple jumper to a win at the 2009 SEC Outdoor Championships, the first Ole Miss winner since 1992 to accomplish the feat.

She broke through the coaching platform when she coached at her alma mater and Big 12 competitor, Kansas State. Kinard spent two seasons with the Wildcats before pursuing her own professional career as a triple jumper.

A decorated collegiate jumper herself, Kinard began her collegiate career at Santa Monica College where she was the 1995 CCCAA triple jump and long jump champion under legendary track & field coach Tommie Smith. She then transferred to Kansas State where she competed for the Wildcats from 1996-98. Kinard is a six-time All-American with five distinctions in the triple jump and one in the long jump. In her first season with Kansas State, Kinard finished runner-up in the Big 12 Outdoor Championships in the triple jump, turned in a fourth-place showing at the NCAA Outdoor Championships and placed 10th at the U.S. Olympic Trials.

Not only is Kinard gifted in coaching collegiate talent, but she also coaches her daughter Adyn who is a very gifted track and field athlete.