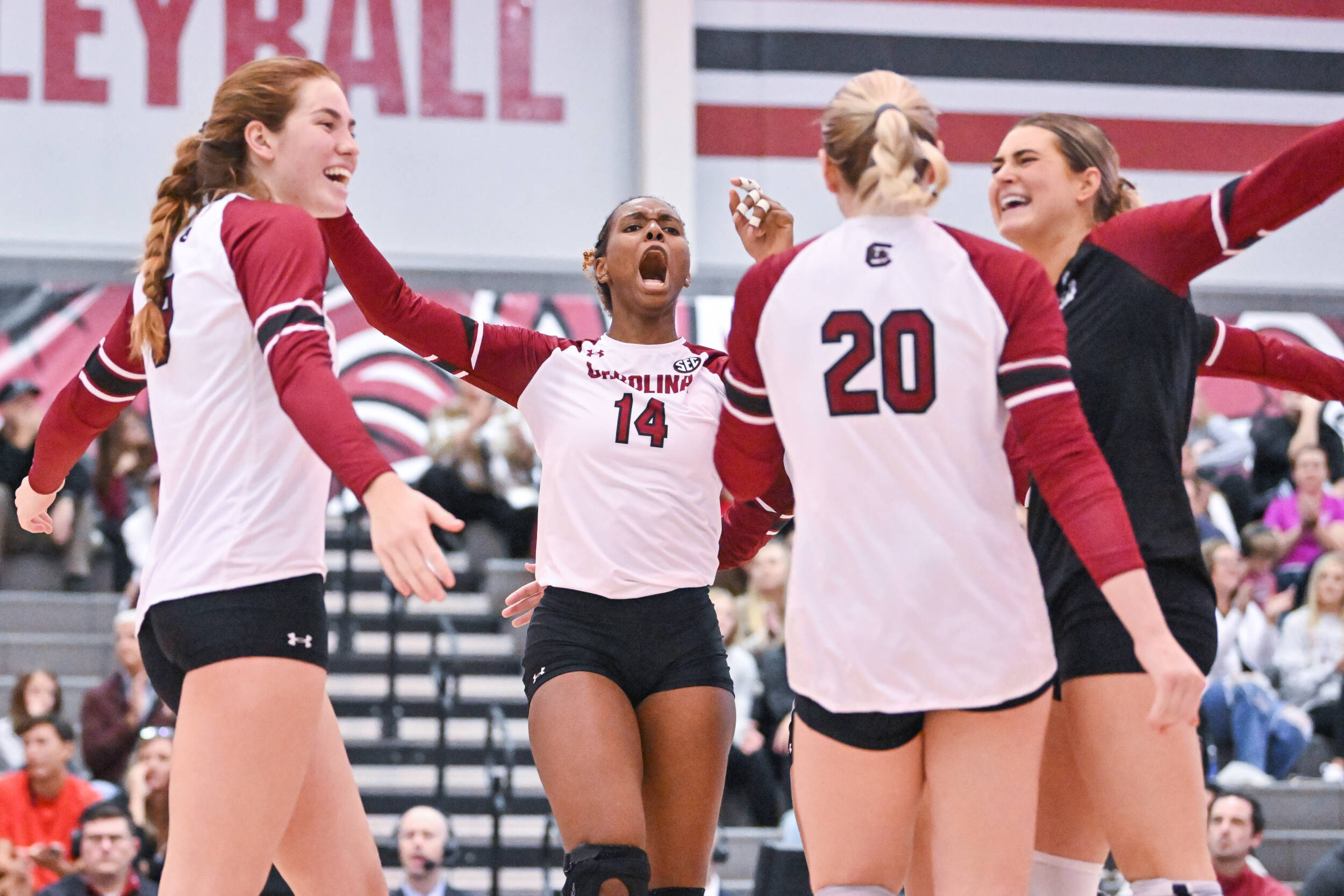 Volleyball Rallies to Take Down Auburn in Home Finale

1st SET: The Gamecocks gave up a lead mid-way through the opening game, allowing Auburn to open the match with a 26-24 win. A pair of kills from Fletcher sent the team into the first timeout of the day with a 15-12 lead, but the Tigers worked their way back to take the lead at 19-18 after three consecutive attack errors for Carolina. The set would be knotted at points 19 through 24 before the visitors strung together two points for the victory. Fletcher finished the set with a team-high five kills.

2nd SET: South Carolina’s offense enjoyed its largest output of the day to rally in the second, using a 17-10 advantage in kills to take a 25-18 win and even the match at a set apiece. After a 3-0 start to the set for Auburn, the Gamecocks scored the next seven points and did not look back from there. Fletcher added five more kills, Johnson went 4-for-4 on her swings and Ellie Ruprich also had four kills in the set.

3rd SET: Auburn pushed back ahead with a 25-20 win in the third, using a late surge to take back momentum. Out of a 13-all tie, the Tigers scored nine of the next 11 points to take control. Despite the loss, Johnson had another strong performance with five more kills and Ruprich went 3-for-3 on her swings, but the rest of the Gamecock offense combined for just three kills and six errors on 22 attacks.

4th SET: The Gamecocks again answered the bell in the fourth, shutting down the Auburn offense in a 25-16 set score to force a fifth. South Carolina found its edge behind the service line, getting three aces while the Tigers had just one compared to four errors on serve. Hampton led the back line with seven digs, helping hold Auburn to just seven kills on 26 swings. Johnson, Riley Whitesides and Lauren McCutcheon each had three kills to lead the offense.

5th SET: The serve game again made the difference in the final game to 15, Auburn opened the set with the first of three errors on serve and South Carolina rushed out to a 5-2 lead. The Tigers seemed poised for a rally with back-to-back points out of a timeout to make it 5-4, but another service error and back-to-back kills from Johnson extended the lead back out for the Gamecocks. South Carolina enjoyed a multi-point lead the rest of the way, finishing on a 3-0 run to win 15-10, capped by an ace from Camilla Covas on the senior’s final serve on home court.

QUOTABLE: TOM MENDOZA
It feels great to win the last home match of the year, thank you to the Carolina Volleyball Band, season ticket holders, students and anyone who came to help provide what we feel is the best home atmosphere in the SEC. I’m thrilled for our seniors to be able to remember their last home game as win, especially beating a team as strong as Auburn has been this year. We felt like we had a strong last 10 days of practice and although we weren’t perfect today, areas like our serving and our offense were able to impact the game so much after putting so much work in this week.

UP NEXT
Two more matches remain on the slate; the team travels on Thanksgiving day and plays at Kentucky on Nov. 25 and 26. The Gamecocks snapped a 13-game losing streak to Kentucky last November, winning in five sets at home. South Carolina’s last win over the Wildcats in Lexington came back on Nov. 5, 2003. The Gamecocks’ leader on offense was current assistant coach Shonda Wallace, with 16 kills. Follow @GamecockVolley on Twitter for continued updates on the team.