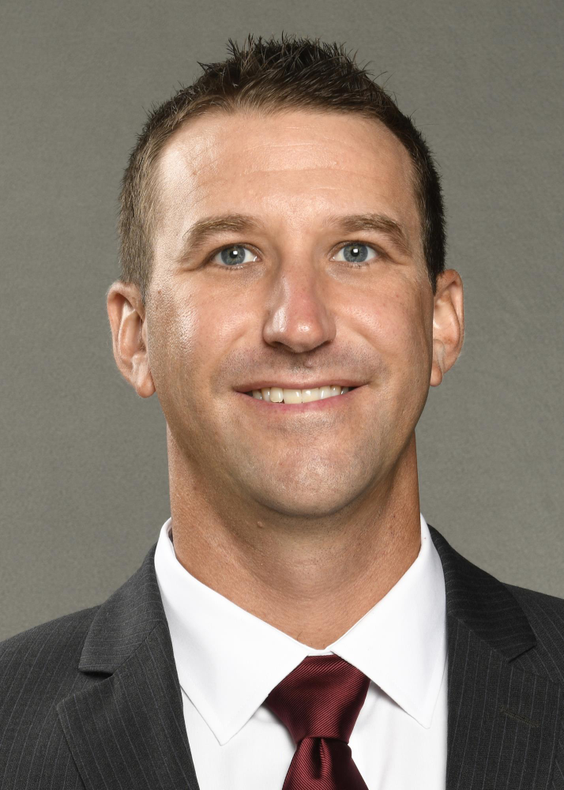 Justin Parker completed his first season as the pitching coach at the University of South Carolina.

In his first season in Columbia, Parker helped a staff riddled by injuries to 501 strikeouts in 479 innings pitched. He helped Noah Hall, who started in the bullpen, to 76.2 innings pitched and a 3.18 ERA in 10 SEC contests. Will Sanders ranked in the top 10 in the SEC in innings pitched, ERA and strikeouts on his way to a 7-3 overall record and a 3.43 ERA. Cade Austin was a Freshman All-American by Collegiate Baseball, making 27 appearances with a 5-2 record and a 3.17 ERA.

Parker joins the Gamecocks after spending three seasons as the associate head coach/pitching coach at Indiana University. His staff with the Hoosiers had a 3.17 ERA and struck out 462 batters in 383.1 innings pitched as Indiana went 26-18 with a Big Ten-only schedule in 2021. Four pitchers from Parker’s staff were selected in the 2021 MLB Draft, including McCade Brown, who was selected in the third round by the Colorado Rockies and Gabe Bierman, picked in the seventh round by the Miami Marlins.

In 2019, Parker help guide the Hoosiers to the 2019 Big Ten Regular Season title – the seventh in program history and the first for IU since 2014. Indiana earned a No. 2 seed in the NCAA Tournament, finishing the season with an overall record of 37-23 and a Big Ten mark of 17-7. A school-record 10 Hoosiers were selected in the 2019 MLB Draft, led by outfield Matt Gorski, who was selected in the second round (57th overall). Gorski was the highest-drafted Hoosier since Kyle Schwarber in 2014 (1st round, fourth overall).Pitcher Andrew Saalfrank was named the Big Ten Pitcher of the Year and earned a spot on the All-Big Ten First Team along with utility player Matt Lloyd. Scotty Bradley, Cole Barr and Gorski each made the second team, while Elijah Dunham earned third team laurels.

Prior to joining the Hoosiers, Parker served as the pitching coach at UCF for two seasons. He was formally named pitching coach for the Knights on July 18, 2016, after spending the previous six seasons with the Wright State program as an assistant coach.

During the 2018 campaign, Parker’s staff posted a 3.32 ERA, the eighth sub-3.50 ERA season in school history. Pitchers struck out 556 batters, good for second in program history behind 2001’s 597, while the Knights set a new program record with 7.1 hits allowed per nine innings and gave up the third fewest hits at 405. Thad Ward was a first team all-conference reliever with a 2.88 ERA and a team-high 52 strikeouts in 40.2 innings of relief this season.

Under Parker in his first season with the Knights in 2017, the pitching staff was one of the best in the nation, finishing 10th in WHIP (1.22), 24th in strikeout-to-walks ratio (2.74), 28th in strikeouts per nine innings (8.9) and 52nd in walks per nine innings (3.26). The crowning achievement for Parker’s players was the fifth best ERA in the nation at 3.00. Freshman Joseph Sheridan and senior Robby Howell both won 10 games and finished tied for 13th in the country in that category.

Parker has consistently produced pitchers selected in the MLB Draft. Of his 20 draft picks, nine have gone in the first 10 rounds. In just two years at UCF, Parker sent nine arms to the professional ranks.

Following the 2018 season, Parker and UCF had five pitchers selected in the draft, the most since 2002 and tied for the second most ever in school history. Thad Ward (5th Round, Boston Red Sox), JJ Montgomery (7th Round, Baltimore Orioles), Bryce Tucker (14th Round San Francisco Giants), Eric Hepple (27th Round, Colorado Rockies), and Cre Finfrock (29th Round, Toronto Blue Jays) each heard their names called.

UCF’s Jason Bahr was a fifth-round selection by the San Francisco Giants in 2017. He was followed by Robby Howell in the 10th round, who went to the Cincinnati Reds. Jordan Scheftz (23rd round, Cleveland Indians) and Andy Rohloff (37th round, San Francisco Giants) also heard their names called after one year under Parker.

Dating back to his days on staff at Wright State, Parker guided Jesse Scholtens to a ninth-round selection by the San Diego Padres in 2016. Fellow Raider Robby Sexton was also tabbed in the 14th round by the Boston Red Sox in the same draft. His first player ever drafted was Andrew Elliott in the 30th round of the 2015 Draft to the Baltimore Orioles.

Parker’s ability to work with freshmen and veterans has been showcased in seven All-Americans selections. At UCF, Joseph Sheridan (College Baseball News and Perfect Game) was tabbed as a Freshman All-American, and Robby Howell earned Collegiate Baseball All-American status.

The Raiders pitching staff enjoyed a great deal of success under Parker. In 2016, Wright State freshman pitcher Sampen was named Horizon League Newcomer of the Year, while senior ace Scholtens compiled a 10-1 record, which included the first perfect game in school history.

Parker’s pitchers guided Wright State to the Horizon League Championship in 2016. The Raiders posted a 46-17 record and ranked fifth in the country in walks per nine innings at 2.45, 33rd in ERA at 3.49 and 10th in WHIP at 1.2, all of which led the Horizon League. Scholtens finished the season 18th in wins (10), 70th in strikeouts (95) and 51st in walks allowed per nine innings.

Following a professional career, Parker returned to coach his alma mater in 2011.

Parker was drafted by the Minnesota Twins in the 43rd round of the 2005 MLB June Amateur Draft from Fort Wayne High School (Fort Wayne, Ind.) but opted to play for Wright State University. He was drafted again, this time by the Arizona Diamondbacks in the 6th round of the 2008 MLB June Amateur Draft where he spent three years playing for the Diamondbacks minor league affiliates.

As a player at Wright State, Parker earned first-team Horizon League selections in 2007 and 2008, as well as second team ABCA All Region in 2007, and was an ESPN The Magazine Academic All-District recipient in 2008.

Parker graduated from Wright State with a bachelor’s degree in Organizational Leadership in 2012. He is married to Angela Parker and is the brother of former MLB pitcher Jarrod Parker.