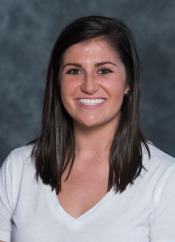 2017-18: Served as team captain for the Western squad in her final collegiate season… Competed three times. starting with a victory Sept. 22 in the exhibition matchup with Clemson… Rode an exhibition against Texas A&M on Sept. 29… Also participated in an exhibition against Fresno State on March 9, when she scored a 67.5.

2016-17: Went 0-1 in official rides, with four appearances overall… Sang the national anthem prior to Carolina’s men’s basketball Final Four game against Gonzaga, singing in front of over 70,000 spectators in Phoenix and millions more watching live on CBS… Competed for the first time as a Gamecock on Sept. 23 in the win over No. 5 Baylor… Scored a 71 in an exhibition ride Feb. 10 against No. 2 Texas A&M… Had the opportunity of a lifetime when she sang the national anthem as part of a student-athlete quartet prior to South Carolina’s men’s basketball Final Four game against Gonzaga.