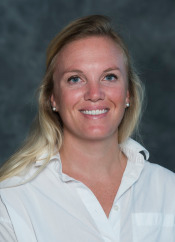 Gamecock legend Kristen Terebesi was hired as an assistant coach for the Carolina equestrian team prior to the 2017-18 season. She will work with the hunt seat squad and assist in the day-to-day operations of the Gamecock program.

“I could not be happier that Kristen Terebesi has returned home and joined our program as the assistant coach in charge of the hunt seat team,” Major said. “Kristen is one of the very best hunt seat riders in collegiate equestrian history, and we have remained close since her graduation. I have long hoped that she would one day return to our program to begin her coaching career, and now that it has happened I can’t wait to accomplish great things together.”

“There is this palpable and contagious energy for greatness that the University and Gamecock Athletics carries – this spirit I am so humbled to be coming home to,” Terebesi said. “The opportunity to engage in shaping the future of our student-athletes and equestrian sport is incredible. I simply can’t wait to get started.”

A native of Glenmoore, Pa., Terebesi was a four-year starter both in equitation over fences and equitation on the flat from 2004-08. She led the Gamecocks to NCEA overall national championships in both 2005 and 2007 and was part of the team’s hunt seat national title in 2006. In her senior season of 2008, Terebesi became the only rider in history to win individual national championships in both hunt seat disciplines in the same season.

Terebesi was a team captain in 2007-08 and was voted Carolina’s Female Student-Athlete of the Year at the end of the academic year. She was a four-time Gamecock Team MVP and a three-time MVP at the Varsity Equestrian National Championships event.

After graduating from South Carolina in 2008 with a B.A. in advertising, Terebesi began a career at The Book, LLC, eventually rising to the position of Creative Director. In her role with The Book, LLC, Terebesi worked with clients to create personalized storybooks highlighting the bonds between horses and riders while also celebrating the equestrian lifestyle.

In addition to her work with The Book, LLC, Terebesi used her talent for photography and graphic design to start her own business, A Few Fishies. With her business, Terebesi photographs food, portraits and seascapes and creates custom-commissioned artwork and illustrations.

Throughout her post-collegiate career, Terebesi has maintained her passion for horses, with many of her projects centered on the equine industry. She has trained horses in her spare time while also working with aspiring riders.

Terebesi comes from a Gamecock family. Her father, Chris played golf at Carolina from 1977-81.

“Kristen was in the process of interviewing for several trainer positions around the country when our hunt seat position opened up,” Major said. “For her to return to South Carolina is fate, and I’m so glad we were able to reconnect as we look to build on the success of past seasons and launch a new golden era of Gamecock equestrian.”