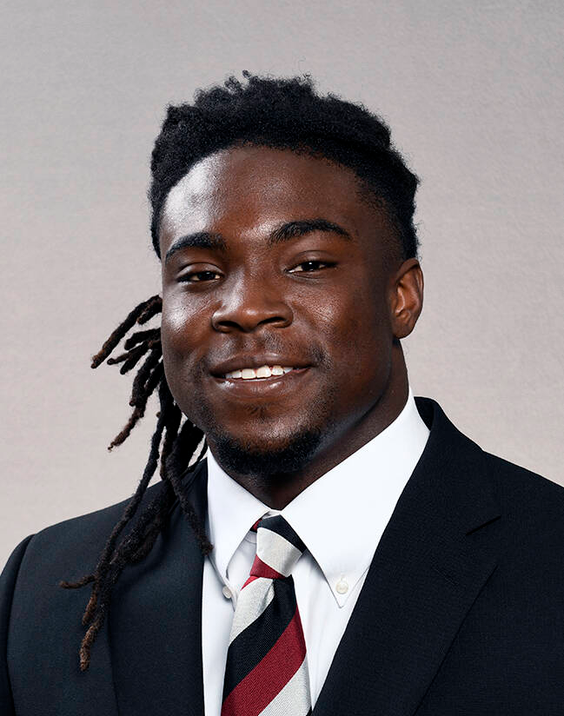 Graduate transfer walk-on from Columbia University who joined the squad in the summer… earned his Ivy League degree in May… smart, mature player who brings a lot of speed to the field… in a three-year career, “Lil Turbo” played in 26 games, making seven starts… rushed for 1,281 yards on 258 carries with six touchdowns, a 5.0-yard average… career-long run of 83 yards ranks as the sixth longest rush in school history… ranked ninth in career rushing yards (1,281), fourth in yards per carry in a career (5.0), and seventh in rushing yards per game (49.3) in school history… after his 2021 season, in Columbia season records, ranks No. 6 in most yards (841), No. 5 in most yards per carry (5.6), and No. 7 in most yards rushing per game (81.4).

2021 (Senior)
Earned First Team All-Ivy League honors by Phil Steele… saw action in all 10 games with four starts at running back… ranked second in the Ivy League in both rushing yards (814) and rushing yards per game (81.4), third in rushing yards per carry (5.61), and fourth in all-purpose yardage per game (92.20)… scored four touchdowns… ranked 26th nationally in rushing yards per carry, 30th in rushing yards per game (81.4)… logged three 100-yard rushing games and three runs over 60 yards or more… had six runs of 40 yards or more and 12 rushes for over 20 yards (8 percent of his carries)… registered his first career 100-yard rushing game with 117 yards on 18 carries in season opener against Marist… rushed for 136 yards on 18 carries, including a 65-yard touchdown run at Central Connecticut State… posted career-bests with 187 yards rushing, including a long run of 75 yards versus Penn… the 187 yards ranked tied for the 11th-best single-game rushing performance in school history and his 11.7-yards per carry ranked as the eighth-best game mark in school history… accumulated 323 rushing yards, on 23 attempts for a 9.5 yards per carry average in back-to-back games at Central Connecticut State and Penn, ranking as the third-best total for rushing yards in consecutive games at Columbia… also played extensively on special teams, totaling three tackles.

2019 (Sophomore)
Played in all 10 games with two starts… rushed for 150 yards and one touchdown on 52 carries… finished with a season-high 38 yards rushing, including a season-long 18-yard run in the season opener at Saint Francis, Pa… scored on a 17-yard touchdown run vs. Penn.

2018 (Freshman)
Saw action in six games with one start at Columbia… suffered a season-ending injury during Columbia’s sixth game vs. Dartmouth… rushed for 317 yards and one touchdown on 61 carries for a team-best 5.2 average and 52.8 average yards per game… was a two-time Ivy League Rookie of the Week selection… named the Ivy League Rookie of the Week after he led the Lions with 93 rushing yards on eight carries and scored his first career TD on an 83-yard burst at Central Connecticut State… the 83-yard run ranked as the longest run in school history for a first-year player and as the sixth-longest run in school history… his 11.6-yards per carry tied for the eighth best single-game mark in school history and the top mark for a first-year performer… the 93-yard effort against CCSU ranked as the third-most rushing yards for a freshman in school history… made his first career start versus Princeton… ran for 80 yards on a career-high 18 attempts vs. Marist… caught a career-high four passes at Penn.

HIGH SCHOOL
Graduated from Richmond Senior High in Richmond County, N.C. in 2018… played four years of varsity football for Head Coach Bryan Till… was a two-time all-conference selection… named team captain as a senior… saw action at running back, wide receiver and defensive back… rushed for 1,703 yards and 25 touchdowns on 217 carries and caught 20 passes for 217 yards and three touchdowns with 30 total touchdowns during his prep career… rushed for 1,327 yards and 19 TDs on 158 carries as a senior… rushed for over 100 yards in seven of the Raiders’ 11 regular season games while averaging 120.6 yards per game… earned Richmond County Athlete of the Week honors… selected to compete in the Carolina’s Shrine Bowl game… led the Raiders to a 7-5 record as a senior… rushed for 294 yards and five touchdowns on 55 carries in 11 games as a junior… scored on a 97-yard kickoff return with 31 seconds remaining in a 21-14 win over Pinecrest… scored eight touchdowns and rushed for 300 yards as a freshman… also competed in basketball, swimming and track and field… personal-best in the 100-meter dash was a 10.2… earned the school’s highest freshman grade point average (4.78)… member of the National Honor Society and National Beta Club.

Dante Davon Miller was born on May 14, 1999… earned a degree in sociology.