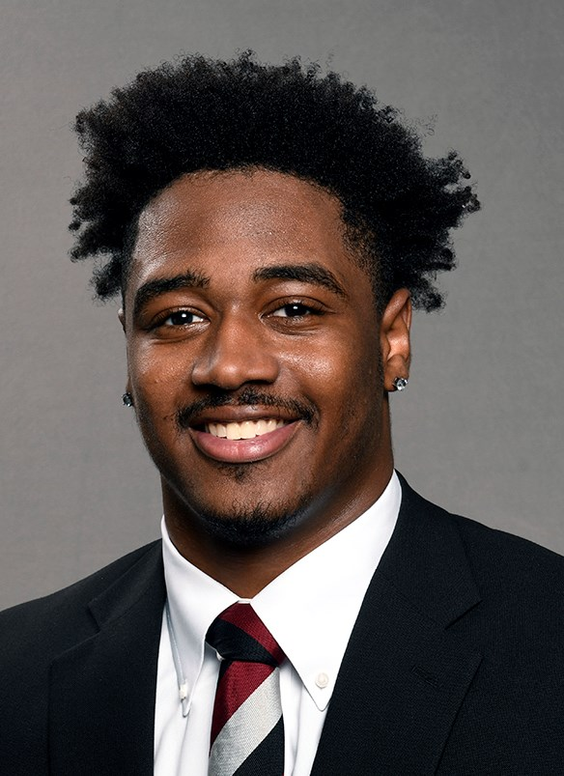 “Super Senior” who elected to come back for one final season, his second with the Gamecocks… transfer from Georgia State who began his career as a walk-on… played for former Gamecock coach Shawn Elliott at GSU… expected to make even more of an impact in 2022 after a full season in the SEC… led the nation in sacks in 2020 and owns 13.5 career sacks… named the Most Improved Special Teams player of the spring.

2021 (Redshirt Senior)
Played in all 13 games in his first season with the Garnet & Black… edge rusher who recorded 22 tackles, including 6.0 tackles for loss and 3.0 sacks… credited with a pair of pass breakups and five quarterback hurries… had a season-high four tackles, including a TFL and QB hurry at Texas A&M… logged 1.5 tackles for loss in the Duke’s Mayo Bowl win over North Carolina… intercepted a pass against Vanderbilt, returning it 44 yards… a Nutrition Award winner as selected by the coaching staff… enrolled at Carolina in January and went through spring drills, but was hampered by a hamstring injury.

2020 (Redshirt Junior)
Returned to the lineup at outside linebacker after suffering a knee injury in 2019… earned third-team All-Sun Belt Conference honors… tied for first in FBS with a school-record 10.5 sacks… average of 1.05 sacks per game ranked seventh in the nation and fourth among players with at least six games played… also set the school record with 14.0 tackles for loss, ranking second in the Sun Belt with 1.4 TFLs per game… tied for the Sun Belt lead with two fumble recoveries and was second with three forced fumbles… part of a Georgia State defense that set a school record with 35 sacks… started all 10 games, totaling 41 tackles… made a big play at Arkansas State with a sack and forced fumble that teammate Blake Carroll picked up and returned 74 yards for a touchdown… named the Sun Belt Defensive Player of the Week for the win at Troy after logging three tackles for loss, including 2.5 sacks, two fumble recoveries and one forced fumble… got a strip-sack and recovered at the Troy 8-yard line to set up a TD and returned his other fumble recovery 63 yards… collected a career-high six tackles against Appalachian State… had two sacks and three tackles for loss at South Alabama… had a strip-sack, forcing a fumble that GSU recovered, with two minutes left against Georgia Southern to help seal the victory… finished the season with 1.5 sacks vs. WKU in the LendingTree Bowl victory… nominated for the Burlsworth Trophy… named to the Athletic Director’s Honor Roll in the spring.

2019 (Redshirt Sophomore)
Suffered a season-ending knee injury in the opening game at Tennessee… named to the Athletic Director’s Honor Roll in the fall and the Sun Belt Conference’s Honor Roll.

2018 (Redshirt Freshman)
Played in every game for the Panthers… made four starts at outside linebacker, sharing the position with senior Michael Shaw… credited with 36 tackles… recovered a fumble in season-opening win over Kennesaw State… broke up a pass the following game at NC State… notched a season-high five tackles versus Western Michigan…. had four stops against Coastal Carolina… named to the Athletic Director’s Honor Roll in the fall.

2017 (Freshman)
Joined the Georgia State program as a walk-on… took a redshirt year, during which he moved from safety to outside linebacker.