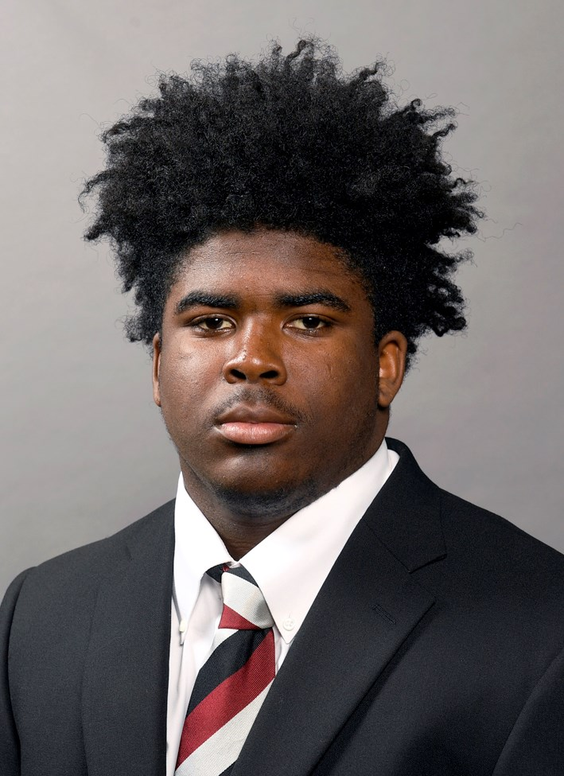 Senior defensive lineman who returns for a fifth year after taking an unexpected redshirt season in 2019… figures to play a prominent role up front at either defensive tackle or defensive end… has appeared in 40 games making 25 starts… owns 110 career tackles with 13.0 tackles for loss, 5.5 sacks and eight quarterback hurries.

2019
Suffered an ankle injury during fall camp which ultimately resulted in an infection, keeping him sidelined for most of the season… played in just two games late in the year… credited with four tackles… tallied one tackle for loss against Appalachian State and had three stops at Texas A&M… redshirted… selected by the coaches as one of six winners of the Dr. Harris Pastides Outstanding Student-Athlete Award following the season.

2018
Junior defensive lineman who played both inside and on the edge… started all 12 games in which he appeared… missed the Akron game after being injured at Clemson… credited with 44 tackles on the season including 3.5 tackles for loss and 1.5 sacks… also had four quarterback hurries… logged five tackles and a half-sack against Georgia… tallied five tackles and recorded a tackle for loss for the third-straight game against Kentucky… posted a season high six tackles and a quarterback hurry in the win over Missouri… had five tackles,  a half-tackle for loss and a quarterback hurry vs. Texas A&M… credited with five tackles in the win over Ole Miss… matched a season high with six tackles at Florida… recorded a sack and two hurries in the Chattanooga win.

2017
True sophomore defensive lineman who played in all 13 games making 11 starts… primarily used at defensive end, but also slid into the interior of the line… credited with 38 tackles including 4.5 tackles for loss and a pair of sacks… had three quarterback hurries and forced one fumble… turned in a big game in the season-opener against NC State, with five tackles, 2.0 tackles for loss and a sack… notched five tackles vs. Kentucky… tallied a sack on the final drive of the Tennessee win, forcing a fumble and costing the Vols crucial seconds as Carolina held on for the win… set a career high with seven tackles and added 1.5 tackles for loss at Georgia.

2016
Enrolled at Carolina in January… played in all 13 games with two starts… credited with 24 tackles, 4.0 tackles for loss and 2.0 sacks… made three tackles in his collegiate debut, a victory over Vanderbilt… had two tackles and made his first career sack in the East Carolina win… made his first career start against Texas A&M and had a strong effort with five tackles (three solo)… made his second straight start at defensive tackle against Georgia… made two tackles, including one stop for loss, added a quarterback hurry and a fumble forced in the UMass win… had a critical fourth-quarter sack in the win over Missouri… made two tackles, including one tackle for loss, in the Western Carolina win.

HIGH SCHOOL
Graduated from Miami (Fla.) Central High School at mid-year… coached by Roland Smith… played multiple positions, including nose guard, defensive tackle, defensive end and linebacker… earned first-team Class 6A all-state honors… recognized as the 8A-6A Defensive Player of the Year as part of the Miami Herald’s All-Dade Awards event… racked up 22 sacks among his 83 tackles as a senior… recorded 71 tackles and 18 sacks as a junior… regarded as the 23rd-best strongside defensive end in the country and the 49th-best player in Florida, according to Rivals… 247Sports rated him as the 26th-best strongside defensive end in the nation and the 64th-best player in Florida… ESPN ranked him as the 26th-best defensive end, the 37th-best player in the state and No. 192 overall on the ESPN 300… was a PrepStar All-American.

PERSONAL
Keir S. Thomas was born Jan. 25, 1998… graduated in December 2019 with a degree in interdisciplinary studies..