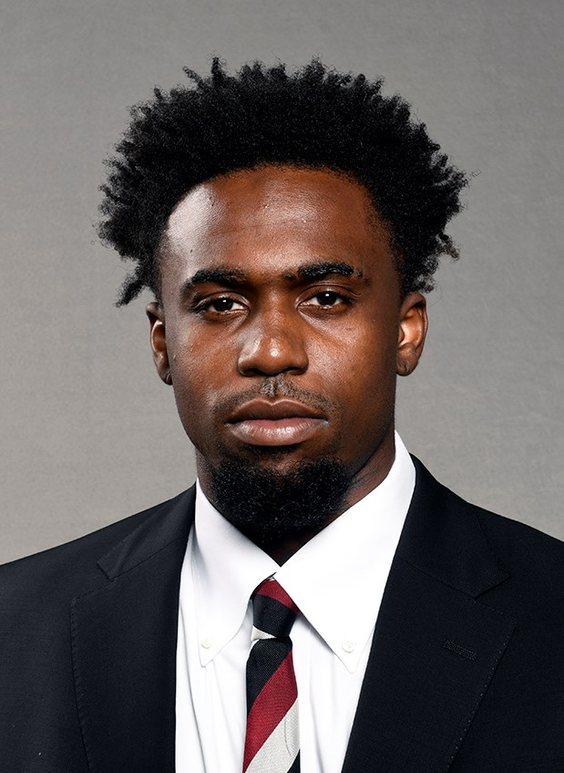 “Quan” spent two seasons with the Gamecocks… versatile performer who has played both running back and linebacker during his collegiate career which began at Florida State… also used on special teams… high energy guy who plays with emotion.

Gamecocks’ second-leading rusher with 583 yards on 88 carries, an average of 6.6-yards per tote, tying for the third-best mark in school history… selected by the Carolina coaches as one of four Overcoming Adversity Award winners…played in 12 games, making six starts… started each of the first two games, then started each of the final four regular season contests… caught 19 passes out of the backfield for 202 yards, 10.6 per catch… tied for the team lead with five TDs, two rushing and three receiving… opened the season with a career-best 128-yard effort against Eastern Illinois… included was a season-long 63-yard scoring burst in his first career start… led the team with 12 carries for 65 yards, all in the second half, vs. Vanderbilt… logged his second 100-yard rushing game with a 13-carry, 111-yard effort against Florida, including a 54-yard run to setup the team’s first touchdown… led the team with 60 rushing yards and a TD at Missouri when he served as a game captain… also had three catches for 48 yards, including a career-long, 38-yard TD reception… led the team with 168 all-purpose yards – 99 rushing yards and a career-high 69 yards receiving against Auburn… had a 28-yard receiving TD and a career-long 40-yard catch against the Tigers… earned Most Improved Player honors for the offense in the spring, as selected by the coaches… invited to the NFL Combine.

JUCO transfer who  appeared in nine games… used on offense, defense and special teams… began the season at running back… made his debut against Tennessee in the season-opener, rushing a season-high seven times for 19 yards… also had one reception in that contest… did not play at Florida… had two carries for a season-best 29 yards at Vanderbilt, including a career-long 21-yard burst… added two carries versus Texas A&M and five rushes against Georgia… had two kickoff returns, one against Missouri and one against Georgia… credited with six tackles on the season, including two against Georgia.

Spent the season at Iowa Western C.C. in Council Bluffs where he returned to play running back… named first team NJCAA All-America… rushed 137 times for 876 yards in eight games, averaging 109.5 yards per game and 6.4 yards per carry, with 10 TDs… the Reivers posted a 9-3 record in 2019, including a win in the Graphic Edge Bowl… coached by Scott Strohmeier… considered the 15th-best JUCO prospect in the country according to Rivals… 247Sports Composite rated him as the No. 1 JUCO running back and 15th overall.

Moved from running back to outside linebacker prior to the 2018 season… appeared in 11 games for the Seminoles and recorded 22 tackles with one 20-yard kickoff return as a redshirt freshman… recorded career-high seven tackles at NC State… had six stops in a win vs. Wake Forest… made four tackles, including three solo stops, vs. No. 2 Clemson… recorded two solo tackles at Syracuse… registered two tackles and 20-yard kickoff return at No. 3 Notre Dame.

Redshirted in his true freshman season at Florida State… worked with the scout team at running back.

Was the top running back recruit in Florida coming out of North Fort Myers in 2017… scored four touchdowns and was the North MVP in December’s Rotary South All-Star Classic in Fort Myers… participated in Nike’s ‘The Opening’ in 2016… rushed for over 1,500 yards and scored 14 touchdowns in two years despite playing only 14 games… had five-game stretch where he rushed for an incredible 956 yards, including a 372-yard, five-touchdown game against Cape Coral… played under former NFL running back Earnest Graham… also ran track… was rated the nation’s No. 7 running back recruit, the No. 26 player in Florida and the No. 141 overall prospect by the 247Sports Composite… also ranked among the nation’s Top 150 players and Top 15 running backs by ESPN and Scout… rated as the No. 15 running back and No. 39 prospect in Florida by Rivals… ranked No. 1 on the News-Press and Naples Daily News’ Big 15 list.

ZaQuandre White was born Dec. 21, 1998… is majoring in interdisciplinary studies.