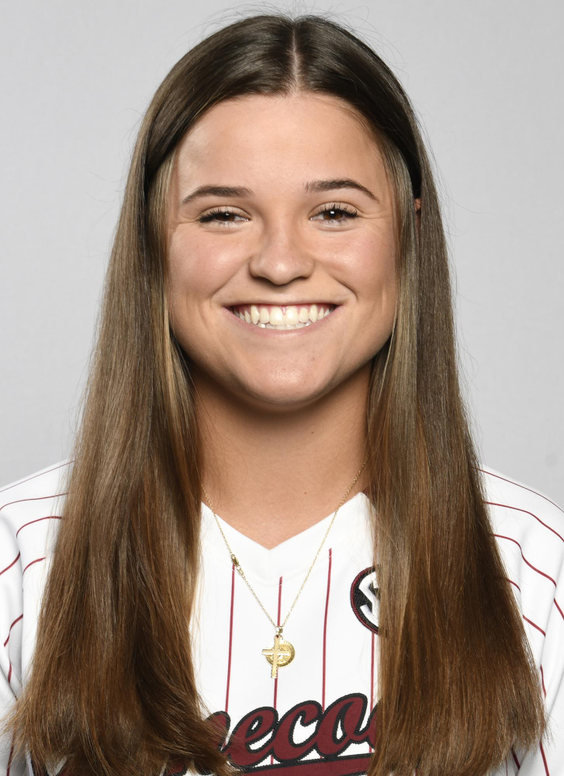 2022 (SOPHOMORE):
Started and played in all 56 games, mostly at second base… Led the team with four triples… Nationally ranked 87th in triples per game… Tied for second on the team with 47 hits… Hit her first career home run against Marshall (2/18)… Had a career-high four RBIs and three runs scored against George Washington (2/12)… Twice collected three hits in a game (College of Charleston, 3/17; Texas A&M, 5/10)… Her seven-game hitting streak was tied for second longest on the team… Finished second on the team with 11 multi-hit games.

2021 (FRESHMAN):
Opened her Carolina career with a .179 batting in 41 games with 26 starts… Saw action at third and in the outfield with 67 at-bats… Posted 12 hits with 12 runs and a double to go along with her four RBI…. Drew 19 walks on her way to a .385 batting average… Saw action in the opening game of the 2021 season against Auburn on 2/20 before earning her first start the following game against Jacksonville that day… In that game, she recoded four walks, the most for any Gamecock since Samantha Jennings against Mississippi State on 3/16/02… Recorded her first hit on 2/24 against Coastal Carolina and earned her first career SEC start on 3/13 vs. No. 19 Arkansas… Scored the game winning run on a sacrifice foul fly-out to the catcher on 4/17 against No. 16 Tennessee.

HIGH SCHOOL
Standout at Paul D. Schreiber High School… Three-year letter winner in softball… Never hit below .549, including a high-mark of .638 in 2018 with 37 hits… Proved to have plenty of pop with the bat – posting 51 extra-base hits (15 home runs) … Brought home 52 runs while scoring 86 herself…. Named the 2019 Nassau County Player of the Year… Two-time All-State selection… Four-time All-County honoree… Also named All-Long Island… Two-time High School Extra Innings All-American… Ranked 27th in the class of 2020 by Extra Innings coming out of high school… In 2019 was selected to Team USA 17U squad that played in the Pan American Games in Colombia.