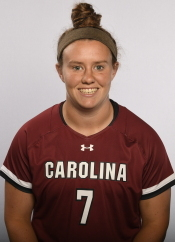 2017: Started all 23 matches for Carolina, leading the team in points (25), assists (9) and goals (8)…netted five game-winners to pace the Gamecocks and rank second in the SEC in the statistical category…her career high nine assists led the conference, and she ranked seventh among SEC players in points per game (1.09)…totaled the second-most shots per match (3.96) in the conference…three of her five game-winners came in league play, and she also netted the decisive goal in Carolina’s 1-0 win over Santa Clara (11/19) in the third round of the NCAA Tournament…boasted a multi-goal game against Wake Forest (8/24)…set up Carolina’s late game-winner at No. 17 Florida (10/26) that handed the Gamecocks the 2017 SEC Regular-Season Title…also registered the game-winning assist against UCF (8/18), Notre Dame (9/1), No. 4 Clemson (9/8) and No. 18 Ole Miss (9/29)…her assist against the Tigers gave her 100 points for her career, making her the third player in school history to accomplish the feat…finished the year with team highs in shots (91) and shots on goal (34).

2016: Boasted one of the finest seasons in program history, setting single-year school records for points (45) and goals (17)…ranked second in Division I with an SEC-leading and program record 10 game-winners…her five game-winners in SEC play topped all players, and her eight goals and 21 points in conference action also ranked in the top three…was third nationally in points and sixth in goals, pacing the conference in both categories…her 1.88 points per match stood as the 13th best mark in Division I, and she ranked 20th nationally with 0.71 goals per game…tied for the team lead with a career-high 11 assists, the third most in one year by a Gamecock…became the sixth Gamecock and the first one since 2010 to record a hat trick after netting three goals against Tulsa (8/21)…logged five multi-goal matches on the year, including two-goal performances in Carolina’s wins over No. 6 Clemson (9/3) and Tennessee (10/23)…her pair of second-half goals against the Volunteers secured the SEC Regular-Season Title for the Gamecocks…netted two scores in the second half against Texas A&M (11/2) to lift Carolina into the SEC Semifinals…notched the game-winning tally in the NCAA Tournament Opening Round against Alabama State (11/11) and finished the match with five points after adding a career-high three assists…the five points against the Hornets were the most in an NCAA Tournament match in program history…posted multi-assist performances against NC State (8/25) and Kentucky (9/25)…her 122 shots and 51 shots on frame were also single-season program records.

2015: Started all 20 matches and led the Gamecocks in points (29) and goals (10)…ranked second on the team in assists (9) and first in shots on goal (28)…her 1.45 points per game were good for the third-best mark in the SEC and ranked 56th nationally… also ranked in the top five in the SEC in points, total assists and assists per game (0.45)…recorded a career-high five points against Kennesaw State (9/14) after notching two goals and an assist…became the third Gamecock to record double-digit goal totals over the last five years after netting her final goal of the season against No. 8 Florida (10/22)…scored the game-winning goal against No. 8 Auburn (10/8)…assisted on both of South Carolina’s goals in the SEC Quarterfinals against Auburn (11/4).

2014: Started all 25 games of her freshman season, playing 1,782 minutes in the attack…tied for the team lead with 15 points, netting five goals and dishing five assists…recorded a shot in every game, putting 27 of her 60 on frame…put all three of her shots on goal in a 2-0 win in the home opener vs. Samford (8/24)…scored her first collegiate point with an assist on a Sophie Groff goal vs. Milwaukee (8/31)…posted an assist in back-to-back games, first on game-winner in a 2-0 result vs. High Point (9/7), then on the final goal of a 3-0 win at USF (9/12)…finally broke through with her first collegiate goal against Florida Gulf Coast (9/14)…scored again in a 1-1 tie at Alabama (10/3) for her first SEC strike…had a stellar night against No. 5 Florida (10/16), scoring two goals against the Gators, the first coming in the 34th minute and the second in the 89th minute on a bouncing header off a corner kick service from Chelsea Drennan that proved to be the game-winner…the performance garnered conference and national attention and was one of three two-goal performances by a Gamecock in 2014…fired a season high seven shots at Vanderbilt (10/24), but could not connect…earned an assist on Raina Johnson’s goal in the 29th minute against the Commodores…posted a goal and an assist in a 3-0 win over Mississippi State (10/30), also put three of her five shots on frame vs. the Bulldogs…played a season high 108 minutes against No. 7 Texas A&M (11/7) in the SEC Tournament semifinals…recorded a shot in all four NCAA Tournament contests.