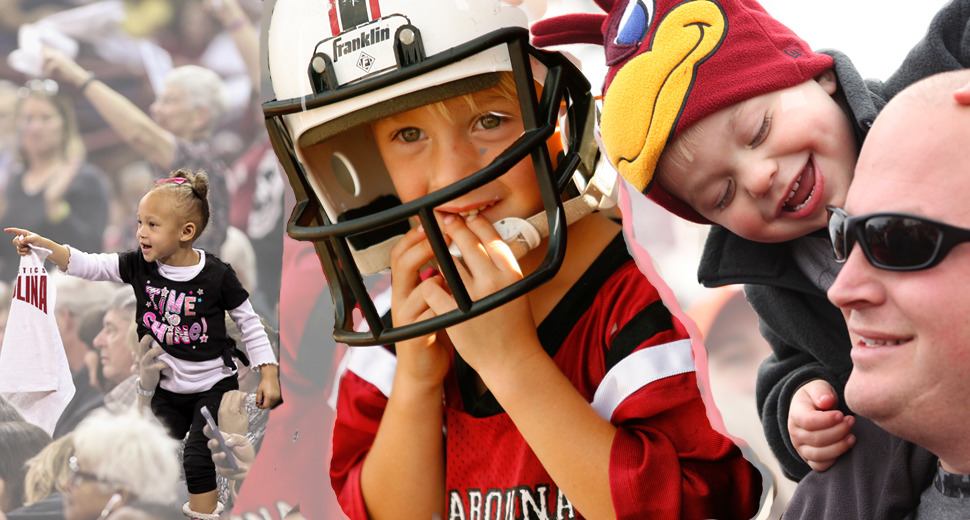 Finding family entertainment at a reasonable cost isn’t always easy, but loading up the mini-van to see the Gamecocks play doesn’t require draining your savings account. Not everyone may be able to purchase tickets for a family of four to the biggest home football game of the year, but there are variable ticket options to experience “2001,” the singing of the alma mater, and everything in between.

“Entertainment dollars are tight for families so we try to be very conscious of that,” said Josh Waters, South Carolina’s director of marketing. “Some of our non-conference football games have significantly reduced prices compared to an SEC game.”

The family-friendly deals extend beyond Williams-Brice Stadium. From August through May, there are opportunities for families to perhaps enjoy a great event with a Gamecock athletics team every week at a tremendous value. For men’s basketball, South Carolina offers family sections for season tickets.

“That’s four season tickets, four Cokes and four t-shirts every game,” Waters said. “We have family packages this year that will include food, kids t-shirts and sunglasses. Our marketing department has set it up for some games where we will have kids-only giveaways.”

Women’s basketball, which is coming off its first SEC regular season championship and third consecutive NCAA Tournament appearance last year, offers a family season ticket package of four tickets at total cost of only $100. With several weeks to go prior to the start of the season, more than 6,000 season tickets have already been sold.

“Ever since day one, everyone said if you build it, they will come,” women’s basketball coach Dawn Staley told season ticket holders at a recent event. “You guys have given us good reason to put a product on the floor that you can be proud of. You’ve spent your hard earned money and budgeted for (us). Hopefully one day, we’ll have one of those big national championship banners hanging from the rafters.”

“It’s very important to not price out the families. We want them to view all the sports here.”

For sports such as men and women’s soccer, softball and volleyball, South Carolina has set a limit on what a family package will cost for an individual game.

“Instead of purchasing four individual tickets that may come out to more than $20, the package is capped at $12 for the four tickets,” Waters said. “You can take your kids to a volleyball game, for example, and it’s cheaper than going to the movies. You’ve got Cocky, the cheerleaders, and the band there. It’s fun, and it can be more fun for young kids than perhaps a football game because there is more interaction.”

The athletics department has ramped up interactions between student-athletes and local children through various community service events to help foster that relationship with the community.

“The thing that drives every decision I make is, what can we do to make the best home field advantage for our student-athletes,” Waters said. “Students and families are very important to us. We try to do things within the game that are kid-friendly too. We have a bounce house at the soccer games. We try to identify entertainment for halftime at some events that are geared toward kids. Even at football games, we’ll try to identify where those family season ticket holders are, and take Cocky and the cheerleaders up in the stands at times so those kids will feel part of the game and feel special.”

The women’s soccer program at South Carolina leads the nation in attendance in 2014, and the concept of keeping the families in mind when it comes to ticket pricing has paid dividends.

“It’s a great opportunity to showcase our student-athletes and create excitement within the community,” said women’s soccer coach Shelley Smith. “Young soccer players, boys or girls, can be inspired by seeing our girls play. It’s very important to not price out the families. We want them to view all the sports here. To have season tickets, it’s a pretty minimal cost to have a great family outing.”

There are also several South Carolina sports in which admission is free for home events during the regular season, representing a great way to support the Gamecocks without the worry of having tickets go unused. This includes sand volleyball, swimming and diving, equestrian, men and women’s tennis, track and field, and cross country.

“We have sellouts in baseball, but we hold back tickets for some games for groups because we want those little league teams to come,” Waters said. “We feel it’s that important to us and the future of Carolina athletics to have fans that are made at a young age. We have group discounts in sports such as volleyball, soccer and softball where if you have 15 or more people coming, you’re only paying one dollar per ticket.”

Whether it’s a youth team, Sunday school, or even an outing for your business, there are group plans available for the masses to enjoy watching the Gamecocks.

“I remember going to games with my parents and grandparents when I was a kid,” Waters said. “Those were great memories for me.”

For more information about tickets and group rates, visit gamecocksonline.com/tickets.