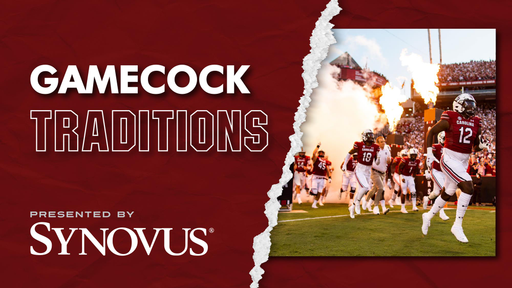 The South Carolina Gamecocks feature perhaps the most unique and electrifying pregame entry in all of college football. In fact, Sporting News rated USC’s “2001” as the most exciting pregame entry in all of college football. As the minutes wind down on the game clock prior to the opening kickoff, the Gamecocks leave the locker room following final pregame instruction from their coaching staff and assemble in the tunnel in the southwest corner of Williams-Brice Stadium. Then, as the crowd of more than 80,000 begins its roar of anticipation, the first notes of the theme song from “2001-A Space Odyssey” blare over the stadium sound system. As the music continues, the enthusiasm of the crowd is feverish. Finally, at just the exact moment, in perfect coordination with the music, the Gamecocks hit the field running.

The lyrics listed below comprise the official university fight song entitled “The Fighting Gamecocks Lead the Way.” The song’s tune is from the musical “How Now, Dow Jones” and the original song in the musical was titled “Step to the Rear.” The music was chosen as the fight song by former football coach and Athletics Director, Paul Dietzel, who also wrote the lyrics. The song is played by the school band during athletics events to motivate players and inspire fans, many of whom throw a hearty fist pump when they hear “Go Cocks!” toward the end of the song.

Hey, Let’s give a cheer,
Carolina is here,
The Fighting Gamecocks lead the way.
Who gives a care,
If the going gets tough,
And when it is rough,
That’s when the ‘Cocks get going.

Hail to our colors of garnet and black,
In Carolina pride have we.
So, Go Gamecocks Go – FIGHT!
Drive for the goal – FIGHT!
USC will win today – GO COCKS!
So, let’s give a cheer,
Carolina is here.
The Fighting Gamecocks All The Way!

Beginning in 1971, John Nelson, an undergraduate biology student, began attending games in a Gamecock costume. He was known as “The Rooster.” This evolved to Big Spur, who appeared during the 1970s and was a bit intimidating.

At the 1980 Homecoming game, the current version of Cocky, by Robert Lane, made his debut as Big Spur’s son. Cocky became the University of South Carolina’s official mascot after this appearance and has maintained this role ever since.

Cocky soon won the hearts of Gamecock fans and is one of the most recognizable figures in college athletics. In 1986, he was chosen as America’s First “National Mascot” by the Universal Cheerleading Association, Ford Motor Company and American Airlines. That same year, Cocky brought home his first UCA Mascot Championship. He continued his success by capturing his second championship in 1994 and also won the Capital One mascot championship in 2003.

One of Cocky’s trademarks is his 2001 Magic Box entrance. The spectacular entrance can be seen at every home football game. The Magic Box entrance is one of many things that Cocky does to get the crowd pumped up and cheering for the Gamecocks. Cocky can be seen pepping the crowd up at a variety of athletics events and also makes numerous community service appearances throughout the year.

The University of South Carolina is the only major college athletic program in the country that uses “Fighting Gamecocks” as its official nickname and mascot. The University’s athletic teams have been known as Gamecocks since the early 1900s.

At the turn of the 20th century, after struggling for more than decade under numerous nicknames, the school’s football team was the impetus of the new moniker. In 1903, Columbia’s morning newspaper, The State, shortened the name to one word and Carolina teams have been Gamecocks ever since.

Those early teams must have been a feisty and spirited group. A gamecock, of course, is a fighting rooster known for its spirit and courage. A cock fight, which was a popular sport throughout the United States in the 19th century, would last until the death of one of the combatants. Cock fighting has been outlawed by most states for humanitarian reasons, but it is still held surreptitiously in many areas.

The State of South Carolina has long been closely connected with the breeding and training of fighting gamecocks. General Thomas Sumter, famed guerrilla fighter of the Revolutionary War, was known as “The Fighting Gamecock.”

Set to the tune of Robert Burns’ “Flow Gently, Sweet Afton,” the alma mater was written in 1911 by George A. Wauchope, an English professor at the university. At the time, several songs submitted as candidates for the alma mater were collectively placed in a songbook and sung at chapel; however, Wauchope’s emerged as the most popular and later became the official alma mater.

The first stanza of the alma mater is sung at all athletics events and the custom of raising one’s right hand with fingers cupped as if offering a toast is visible among fans when the phrase “Here’s a Health, Carolina” is sung at the end.

We hail thee, Carolina, and sing thy high praise;
With loyal devotion, remembering the days;
When proudly we sought thee, thy children to be:
Here’s a health, Carolina, forever to thee!

Visit Williams-Brice Stadium a few hours before kickoff on any gameday and one will see a series of white towels being distributed at seats throughout the stadium. A visitor may pause and wonder upon seeing this activity but Gamecock fans know exactly why the towels are there. A sandstorm is coming…

“Sandstorm” is an instrumental piece by Finnish DJ and record producer Darude that was originally released in the late 1990s. The piece was played during the South Carolina-Ole Miss game in 2009 and was instantly embraced by the student body. Since then, it has been incorporated into football opening game festivities, is heard after football scores and is used at other sports venues as a rally cry for fans and players alike. A sequence of up and down motions are executed in unison as the music starts and these ultimately culminate in a flurry of waving white towels as the song progresses. Chants of “USC” are also repeated in rhythm with the music. What began as a celebration tune toward the end of a big game has become one of the most loved traditions at University of South Carolina athletics events.