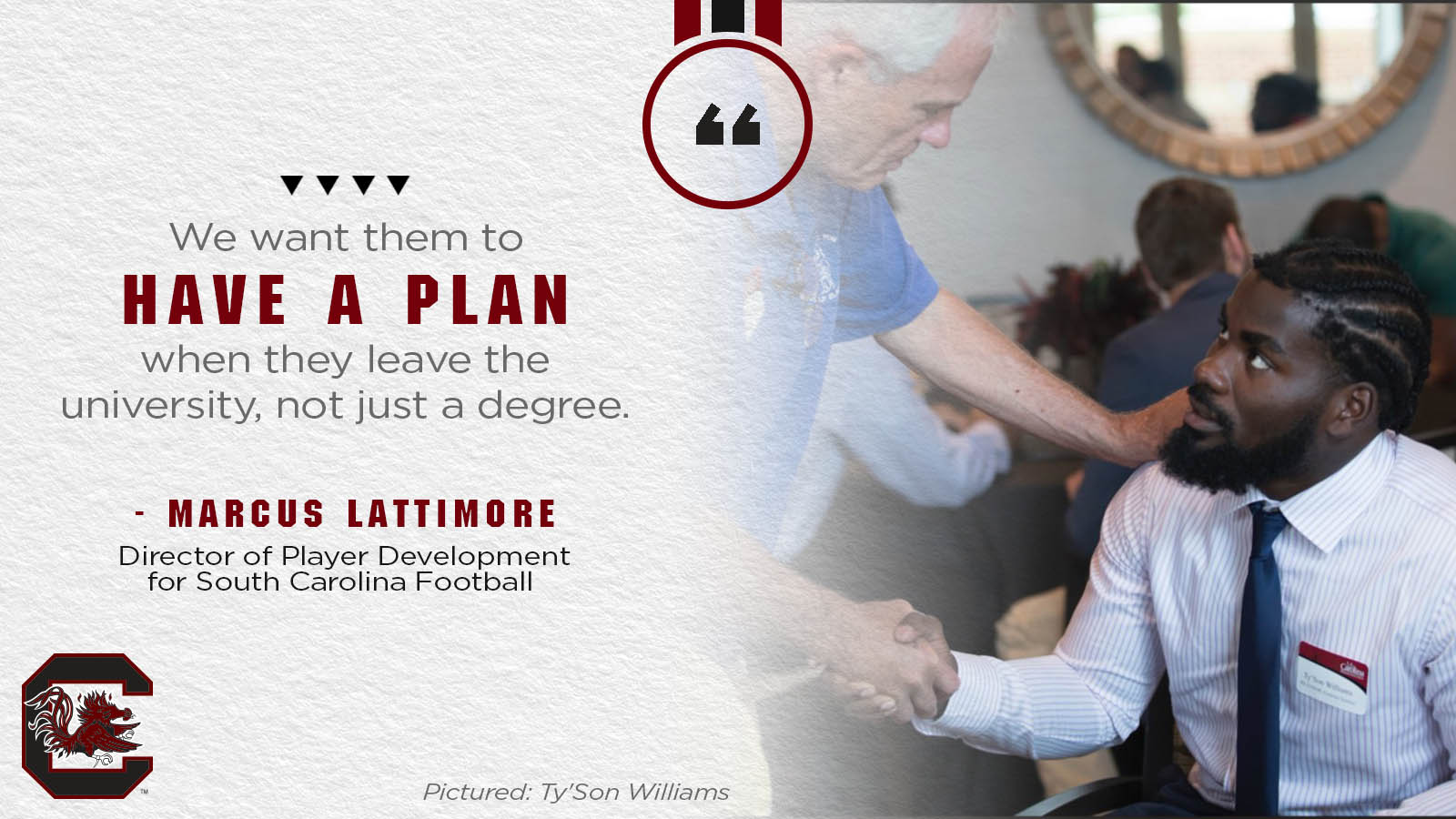 Beyond Football Program is Making an Impact

The program focuses on service, professional development, and identity.

Marcus Lattimore knows how quickly a football career can come to an end. The former South Carolina running back, and current Director of Player Development oversees coach Will Muschamp’s “Beyond Football” program, and after seeing his own career cut short by injury, it’s something that Lattimore takes seriously.

“We have a lot of guest speakers, and whatever our topic is, I want the players to take away something that is implanted in their brain for the rest of their lives,” Lattimore said. “When a recruit comes on campus, I never assume that he knows who I am. I just make sure I tell him a little about my story and why I’m here. There are three things in Beyond Football that we try to focus on: community service, professional development, and identity.”

“The people that he brings in are people that I truly believe God has blessed with a talent of being able to touch people’s lives,” said senior offensive lineman Black Camper. “He brings in people that he knows are going to help us with our lives. We don’t lead a very normal life, and they give us the warnings and the teachings that we need to know to live the fullest life while we’re here and then beyond.”

“They’ve all been impactful,” said senior offensive lineman Zack Bailey. “Whether it’s doing resumes, understanding how to do finances and balance your checking accounts, look for jobs; it’s a complete life skills overhaul. It’s about making sure people understand there is something after football, so have a plan. It’s been incredible.”

Muschamp started a similar program during his time as the head coach at Florida, and when he brought it to South Carolina, Lattimore was told to “take it and run with it,” so he did.

I know I’ve learned a lot of different stuff that I didn’t really know before. Marcus really challenges us.
A.J.  Turner, Junior Running Back

“I did my research and reached out to a lot of people in the business of development, and we came up with those three components,” Lattimore said. “For community service, I work with our director of life skills, Megan Stoltzfus. Professional development is what we spend the most time on. There are so many life skills you need to survive when you leave college.  With freshmen coming in, there are certain things they need. It can be something as simple as managing money on a monthly basis, or how to manage your time.

“The last piece is identity. There are a lot of guys who come from a faith-based background, including myself. Some guys don’t, which is OK. I just want to make sure they know there are resources available when it comes to faith, but that there are also other ways that you can be self-aware and find out who you are.” 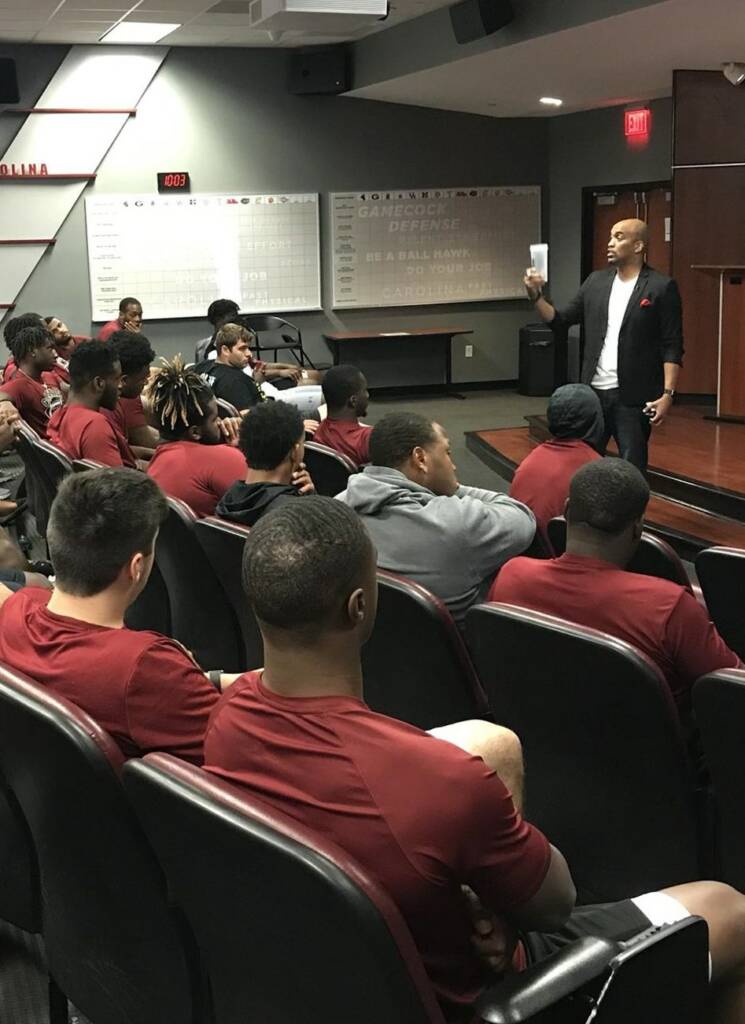 Much of the programing for Beyond Football is held in the offseason and centers around making good choices and respecting others. It also tackles the important issues of mental health and taking away any stigma related to seeking psychological or psychiatric help. Lattimore noted that presentations from renowned speaker Dr. Derek Greenfield proved to be impactful.

“He really challenged the guys,” Lattimore said. “He asked questions that men aren’t usually comfortable answering. He asked whether anybody had every attempted, or at least thought about suicide. There was a good number of people who raised their hands. It was a powerful moment because the coaches were in there. I know they were a little caught by surprise when they saw the number of hands go up. We were able to address a lot of things after that. That was so profound because what if that question had never been asked? That made a big difference and the team became so much closer after that moment. There was a sense of family. Those things off the field can translate on the field and help you win games.”

“It was a time where the team came together more,” said junior quarterback Jake Bentley. “It was time for the team to really know everything about one another and really get those secrets out. So, if a guy is struggling one day, then we know why he is struggling. We can better help him in that area. It was a great experience for us.”

Beyond Football also covers day to day challenges for young student-athletes, having respect for others, and being strong enough to stand up for what is right.

“Social media is a big topic that we’ve hit three or four times this year,” Lattimore said.  “In this day and age, everybody has a platform with social media, which can be positive and negative. If you handle it the right way, there are a lot of advantages to it. You can also blow your career from a 140-character Tweet. We bring a lot of people in about how to handle social media and how to handle the media in general. If you throw an interception or miss a tackle, you have to be able to handle and control your emotions in that moment.

“We’ve done a lot of different types of etiquette. It can be dinner etiquette, email etiquette. My goal when we bring a speaker in is making sure I know what it is I want them to take away from that speaker. I find someone who can relate to the guys; someone who has been in their shoes.”

“I think it’s really beneficial,” said junior running back A.J. Turner. “We had a woman come in a few days ago and tell how she was raped. It was a powerful message. We always think about football, football, football, and how that’s all there really is, but really there is more to it. Ball is not life. I know I’ve learned a lot of different stuff that I didn’t really know before. Marcus really challenges us.”

Lattimore meets one-on-one daily with student-athletes and attends daily practice so that they see his face every day to help build trust. At the end of the day, Lattimore is driven to make sure the Gamecocks have a sense of self-worth that goes beyond the gridiron.

“Again, that’s why identity is so important. There were guys that I played with who struggled with mental health because their identity was wrapped up with one thing; being a football player. We have a lot of resources here. If there is one measure of success for me for the guys when they leave this program, it’s that they know who they are, they’re comfortable, and they realize there is life after football.”