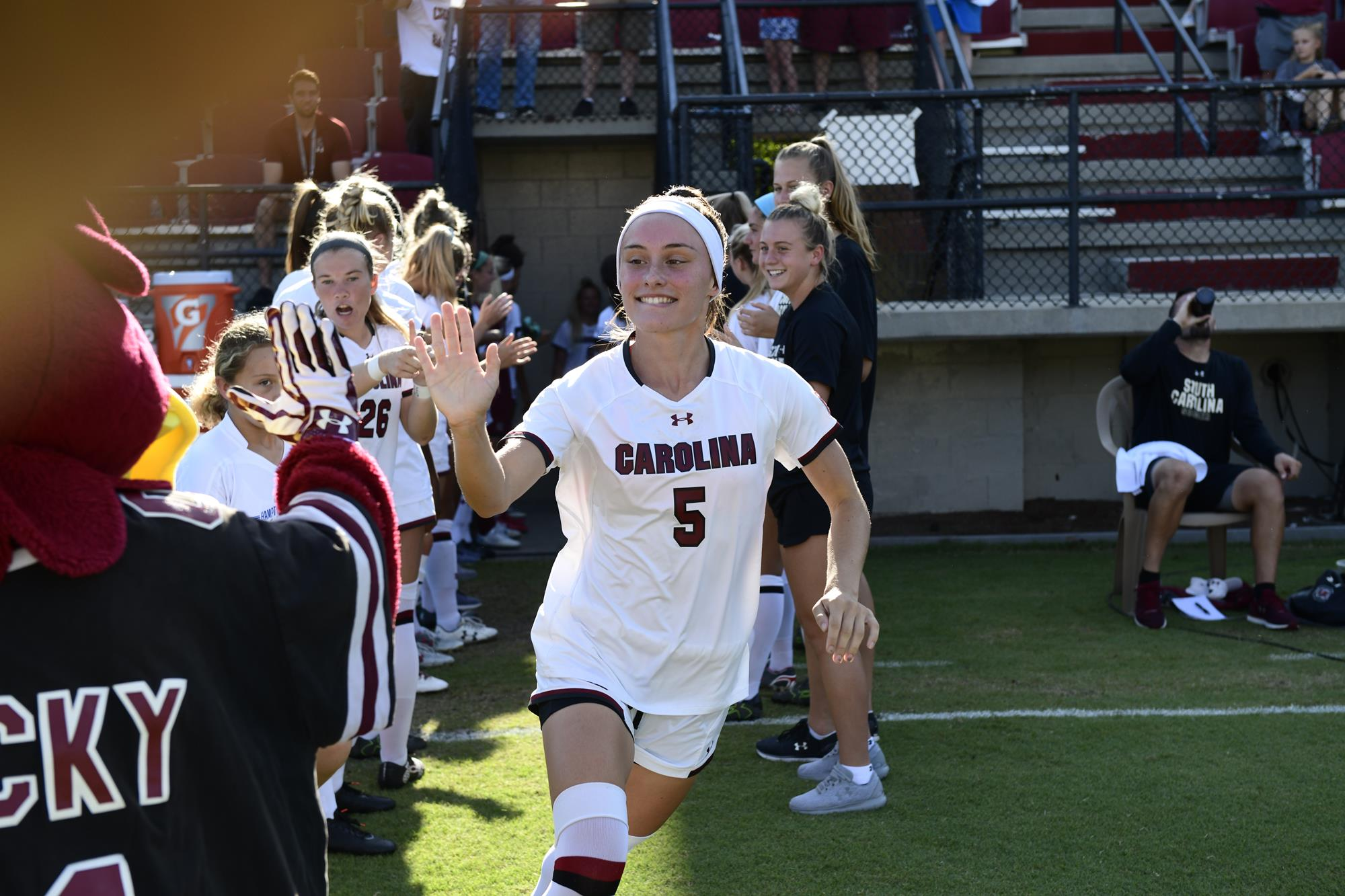 Gamecocks To Take on Georgia, Florida This Weekend

COLUMBIA, S.C. — No. 12 South Carolina is set to face Georgia and Florida this weekend in another busy week of SEC action. The Gamecocks travel to Athens, Ga. to take on Georgia on Thursday before taking on Florida on Sunday at Stone Stadium.

On top of Magnusdottir’s goal, South Carolina added goals when senior Simone Wark scored at 72:16 for her first goal of the 2018 season. Then, sophomore Meredith Cristopher scored her first goal as a member of the Gamecocks at 76:30.

“I think tonight was a tremendous win for our program,” South Carolina head coach Shelley Smith said. “We knew it was going to be a tough battle, Auburn is a tremendous team and to come away with a 3-0 win is an excellent result. Our team did everything we asked them to do from start to finish.”

SCOUTING GEORGIA
The Bulldogs hold a 4-5-3 (1-2-1 SEC) record this season. Georgia has not won a match since it defeated Arkansas on Sept. 13, 3-1. The Bulldogs have since tied Missouri and lost to Texas A&M and Vanderbilt.

As a team, Georgia sits toward the bottom of the SEC in goals, assists and points. South Carolina fans can expect to see a physical match between the two teams as each squad averages over nine fouls per match this season.

Georgia is offensively led by Reagan Glisson, who has scored seven goals and has 17 points this season. Her seven goals has her in a tie for the fifth most in the SEC this season.

Georgia’s Emory Wegener has started all 12 matches this season, allowing 15 goals for a 1.21 goals against average. Her 63 saves leads the SEC this season for a staggering 5.25 saves per match. The freshman goalkeeper made it clear she is a goalkeeper to watch with a nine-save clean sheet in a 0-0 tie with Virginia Tech earlier this season.

Georgia was selected to finish 14th in the SEC in the preseason coaches’ poll.

SCOUTING FLORIDA
Entering Sunday’s rematch of the 2017 NCAA quarterfinals match, the Florida Gators hold a record of 4-6-2 (2-1-1 SEC). The Gators have played one of the toughest schedules in the country, and have sustained multiple injuries on the way to their shocking record at this point of the season.

The Gators last match was against Mississippi State where they tied the Bulldogs 0-0 in Starkville, Miss. The Gators will take on No. 9 Tennessee before taking on the Gamecocks on Sunday.

Senior Kaylan Marckese has started all but one match this season for the Gators. She has allowed 13 goals this season for a 1.12 goals against average. She has made 43 saves, which is tied for the fifth in the SEC this season. Marckese’s .768 save percentage is outside the top 10 in the SEC among qualified goalkeepers.

THEY GROW UP SO FAST
Two former South Carolina women’s soccer student-athletes were a part of the North Carolina Courage’s NWSL Championship that was attained over the weekend. 2014 graduate Sabrina D’Angelo helped the Courage make it to the championship match with a four-save clean sheet in the semifinals against the Chicago Red Stars.

2016 graduate Kaleigh Kurtz started in six matches for the Courage during the season, playing all 90 minutes in each match.

RECORD BOOK WATCH
Junior goalkeeper Mikayla Krzeczowski entered the 2018 season with some career records on her radar. She currently holds the lowest goals against average in South Carolina history with a 0.47 average.

She is second in South Carolina history with 30 shutouts, just one away from career record-holder Mollie Patton, who played from 2006 to 2010. With 131 saves in her career, Krzeczowski recently moved into fourth all-time at South Carolina. She has started 55 matches in her career, the fourth most in program history.

SPECIAL AGENT SELMA
For 20-year-old freshman Selma Sol Magnusdottir, her three goals have all been impressive to say the least. Additionally, the Icelandic international is leading the SEC in assists per match at 0.67 this season, and her six assists is tied for the second most in the conference.

GAMECOCKS IN THE POLLS
On Tuesday afternoon when the weekly United Soccer Coaches poll was released, South Carolina moved up two spots to No. 12 after defeating then-No. 23 Auburn 3-0 at home. In the Top Drawer Soccer poll, Carolina moved from No. 10 to No. 9.

South Carolina made moves in the latest NCAA Women’s Soccer RPI, jumping from No. 9 to No. 7 after the defeat of Auburn. The SEC has the most teams inside the RPI top 10 with three (South Carolina, Texas A&M and Mississippi State).

HITTING THEIR STRIDE
Despite the impressive record this season, South Carolina is not near the top of the SEC statistically this season. Yet, the Gamecocks have scored three goals in each of the last two matches, the first time they have done that since 2016 when they defeated LSU and Kentucky 3-1 and 3-0.

WE SET THE PACE
South Carolina remained the only team in the SEC to not allow a goal in the first half of any match this season by blanking Auburn this past weekend. The South Carolina defense has only allowed four goals in the field of play.

FIRST TIME JITTERS
Sophomore Meredith Cristopher and senior Simone Wark each netted their first goals of the 2018 season against Auburn. For Cristopher, the goal is her first in the Garnet and Black after transferring from Elon this past year.

UP NEXT
After the pair of matches this weekend, South Carolina will play just one next weekend when it travels to No. 19 Vanderbilt. That match is schedule to be played on Fri., Oct. 12, at 8:00 p.m. ET in Nashville, Tenn.