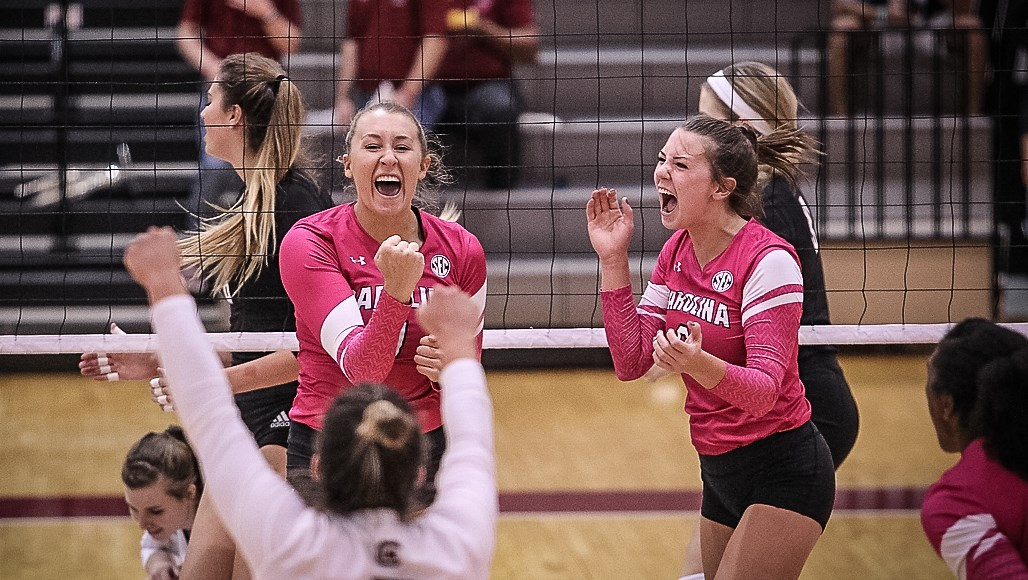 The team earned its second win ever against the Aggies

COLUMBIA, S.C. – South Carolina rebounded from its first loss of the SEC season with a 3-1 win over Texas A&M (10-7, 3-2 SEC) Sunday afternoon. The Gamecocks were able to execute a clean match and took advantage of Aggie errors to move to 14-2 overall for the season and 5-1 in SEC play.

SET 1: There would be 15 total ties and eight lead changes in the opening game, but South Carolina was able to find a key run late to get the 25-21 win. Neither team would lead by more than two points until the Gamecocks went into the media timeout with a 15-12 advantage, but A&M quickly evened the set back up. The key run came out of a 20-all tie, as back-to-back kills from Mikayla Shields and an Aggie attack error provided all the cushion the Gamecocks would need in the win.

SET 2: Texas A&M answered back with a win in set two to tie the match up, putting away 15 kills and getting five blocks to shut down the Gamecocks. South Carolina’s offense was held to 10 kills and saw a big early lead evaporate due to A&M’s presence at the net, as all five blocks came in their final 15 points of the set. Shields and Mikayla Robinson each had three kills, but the team hit just .111 in the game.

SET 3: A trio of Gamecocks helped lead the team back on track in a crucial third set, winning 25-22. Claire Edwards had four kills on four swings and added two blocks and an ace to spark the team, Brittany McLean pitched in four kills as well and Aubrey Ezell led the defense with eight digs in the game. The offense hit .323 and was able to side out at 68 percent in the set, keeping Texas A&M from making any serious comeback attempts. The visitors would get within one, 19-18, late in the set, but kills from McLean and Shields put them back ahead by three and the Aggies would get no closer than two points the rest of the way.

SET 4: South Carolina led wire-to-wire to close out the match, winning 25-14 in the fourth. The offense hit .500 with four different hitters putting down three kills, and Texas A&M hurt its comeback chances with five errors on serve. The Aggies were able to come back from a slow start that gave Carolina a 7-2 lead early, getting to 12-9 before a big run for the home side put the set to rest. The Gamecocks scored eight of the next nine points to go ahead 20-10, and cruised to the win.

STAT OF THE MATCH: Mistakes in the service game doomed the Aggies on the afternoon. The visitors committed 19 errors on serve, compared to just nine for the Gamecocks. The 19 service errors are the most by any Gamecock opponent this season, the previous high was 16 by Liberty on Aug. 31.

UP NEXT: The team has just one match next week, welcoming in nationally ranked Florida on Friday, Oct. 12. The Gators are currently ranked 11thin the coaches top-25 poll. It will also be Alumnae Night for South Carolina, with former Gamecock greats to be honored prior to the 7 p.m. match.