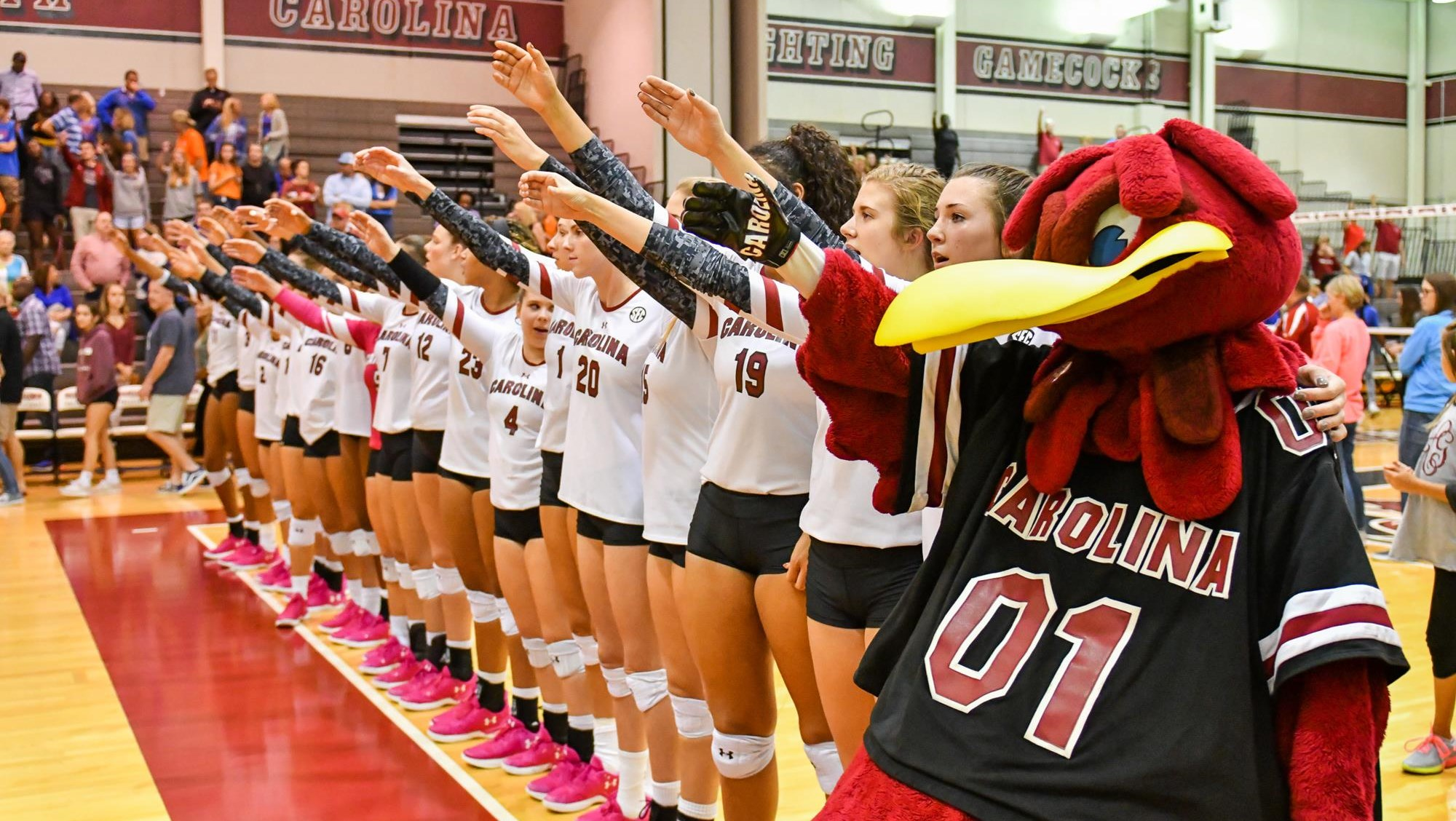 COLUMBIA, S.C. – South Carolina volleyball came just a few points shy of a signature win Friday night, falling to No. 11 Florida in five sets. The Gamecocks (14-3, 5-2 SEC) rallied back from a 2-0 deficit but weren’t able to complete the comeback against the conference-leading Gators (16-3, 7-0 SEC).

SET 1: Florida never trailed in the opening game, out-hitting South Carolina .458 to .115 in a 25-17 win. Brittany McLean would be the team’s bright spot in the set, getting four kills without an error. South Carolina would only trail by three at the media timeout, 15-12, but a 5-0 run for Florida out of the break put the set out of reach.

SET 2: The Gamecock offense struggled with Florida’s big block again in set two, with the team hitting just .065 in a 25-15 loss. The Gator offense hit .471 and blocked back three Gamecock attacks, helping them run away in a set that was at one time tied at 10-10.

SET 3: After being stifled offensively in the opening sets, South Carolina turned the tables on Florida with its net defense in set three. All told, the Gamecocks blocked six balls in the third set alone to help limit the visitors to a match-low hitting percentage of .088. Four different Carolina blockers would have a solo block, highlighted by two from Mikayla Robinson, and the momentum on defense helped spark the Gamecock offense as well. Jess Vastine (three kills), McLean (4) and Mikayla Shields (5) were efficient with their attacks, helping the team break away early and secure a 25-18 win.

SET 4: The Gamecocks needed to win a heavyweight slugfest in set four to keep the comeback hopes alive, and their outside hitters would be up to the challenge. Vastine’s seven kills and McLean’s six accounted for all but one of the team’s 14 total in the set, and it would be just enough to squeak out the 26-24 win. South Carolina just couldn’t seem to get the run needed to erase an early Florida lead, and the visitors inched within victory before a late comeback. Trailing 23-20, kills from Vastine and McLean combined with another big block from Robinson tied the set up. A sideout kill from Florida gave it set and match point, but McLean put together kills on back-to-back swings to turn the score in South Carolina’s favor. A Gator attack sailed wide to ignite the crowd of 1,609 fans and send the match to a deciding fifth.

SET 5: There would be seven ties and two lead changes in the game to 15, but it would be Florida that found the key run late in a 15-12 win. The Gators broke out of a 7-all tie with a pair of kills, and were able to keep that breathing room the rest of the way. The key to Florida’s win in the fifth would be three blocks, negating a hustling Gamecock side that would dig up a match-best 16 digs in the third but could only muster a .154 attack percentage in transition.

STAT OF THE MATCH: Though they were able to slow Florida’s offense in the third, South Carolina allowed the Gators to hit over .450 in the first and second sets, and even .400 in the fourth despite the Gamecocks winning that game. Florida finished the night hitting .309, the second-best attack percentage of the season for a Gamecock opponent in 2018.

UP NEXT: A mid-week trip west will kick off week five of the SEC season for South Carolina. With no Sunday match, the Gamecocks will rest up before going to Arkansas for a Wednesday night showdown with the Razorbacks (8-9 (2-5 SEC). First serve is scheduled for 7 p.m. CT, and airs nationally on the SEC Network.