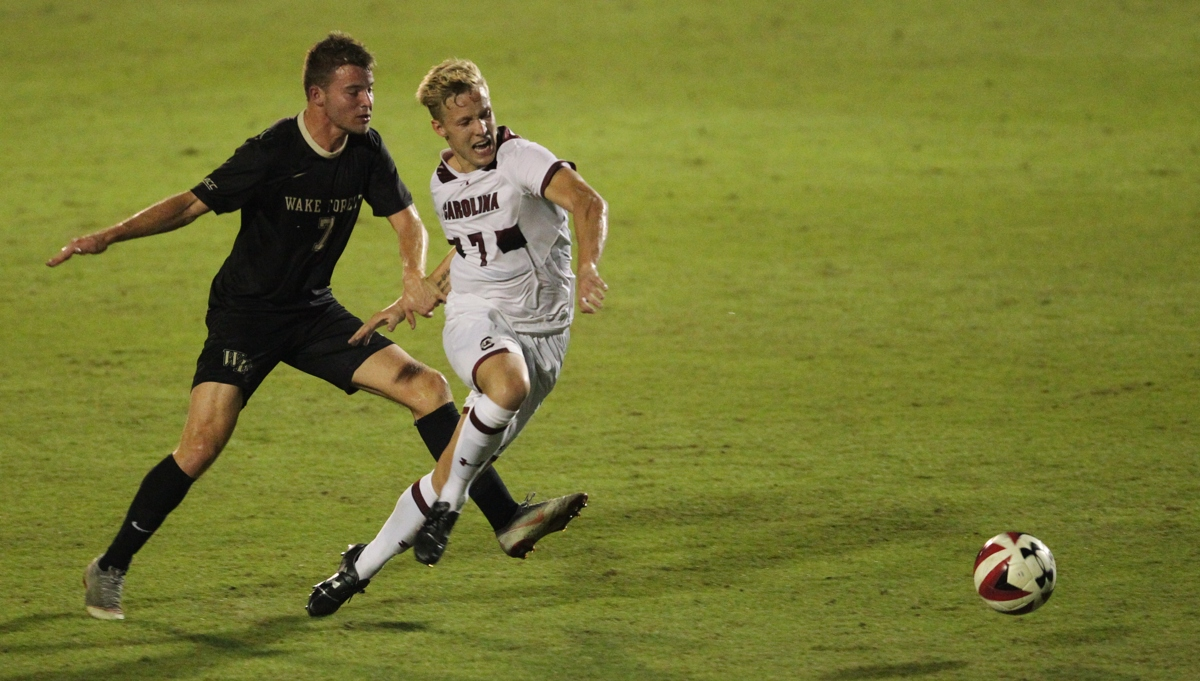 Carolina outshot the Deacs 9-8, but missed on several scoring chances

“Tonight, we were ahead in almost every statistic,” said head coach Mark Berson. “We had more shots and corners, but they got the two that mattered. That was the difference on the night. We had two clear-cut chances that we weren’t able to finish. Against good teams, we have to stick those away. It was difficult, but our guys went toe-to-toe with a very good team. I was real pleased with their attitude and effort. But that’s what we expect. That’s not something that we applaud. They’ll continue to do that the rest of the year. We’ve just got to keep pushing hard and hope we get a few breaks going forward.”

Carolina was aggressive right from the get go Tuesday evening at The Graveyard, as junior Petter Soelberg ripped a shot on target from just outside the 18. Wake’s keeper Andreu Cases Mundet would make a diving save on the strike from Soelberg. Cases Mundet would finish with three more big saves in the match. The Gamecocks had back-to-back corners shortly after the shot that came up empty.

It was Soelberg again in the 12th minute as he crossed a dangerous ball to sophomore Aidan O’Brien in front of the net at the spot. The shot by O’Brien would miss high though. Junior Tucker Monheimer was fouled on a breakaway moments later in the 16th minute, setting up a free kick for junior striker Luca Mayr just outside the top of the 18. Mayr bended a quality ball around the wall to the near post, but Cases Mundet made the save to keep the match scoreless.

The Deacs, who came into the match leading the nation in goals per game (2.92), jumped in front, 1-0, late in the first half when Alistar Johnson hammered home a low shot in the 36th minute. Both teams went into halftime with four shots each.

Mayr nearly tied the match in the 52nd minute after Soelberg sent a ball to him on the wide side of the field on the edge of the 18. He ripped a clean look on target that was scooped up by Cases Mundet. In the 57th minute, Soelberg slotted a perfect pass to Monheimer on the run. The Louisville, Ky., native scored what would have been the equalizer, but he was whistled for offsides.

Top-ranked Wake increased its lead to 2-0 in the 78th minute, taking advantage of a defensive miscue in transition by Carolina. The Gamecocks had two more great scoring opportunities shortly after on a shot off the bar by Soelberg and a free kick that was on-line with the goal by Mayr.

Carolina remains at home and faces USC Upstate (3-8-0, 3-3-0  Big South) on Saturday night at 7 p.m. ET. It’s Take a Kid to the Game Night as fans will receive a FREE youth ticket with the purchase of an adult ticket. All Read with the Gamecocks participants are also invited to attend the match.