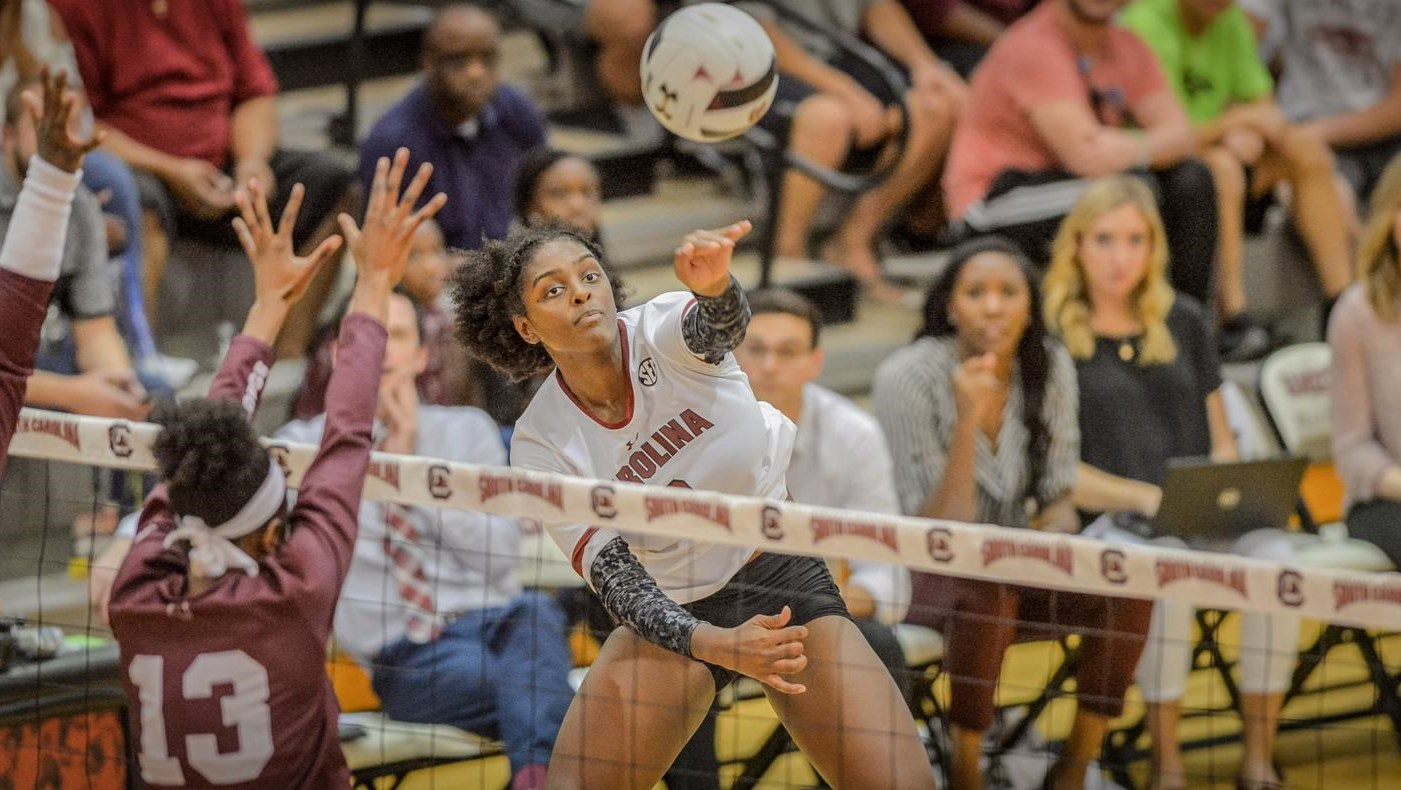 First serve is scheduled for 8 p.m. in Fayetteville

FAYETTEVILLE, ARK. – The South Carolina volleyball team competes in its first mid-week conference match of the season Wednesday night, when it travels to Arkansas for an 8 p.m. ET first serve with the Razorbacks, looking to snap a three-game losing streak in the series. The match will air nationally on the SEC Network, with Melissa Lee and Missy Whittemore calling the action. The team returns home Sunday to take on Georgia at 3 p.m. to wrap up the week.

GAMECOCKS RANKED IN RPI TOP 25, EARN VOTES IN AVCA POLL
South Carolina checked in at No. 27 in the third RPI rankings of the season, released by the NCAA on Monday afternoon. The team also received 15 votes in the weekly coaches top-25 poll, released Monday by the American Volleyball Coaches Association (AVCA), fourth-most among teams outside the top-25. South Carolina was last ranked in the coaches top-25 poll in 2002 and ended the 2017 season ranked 156th in the RPI standings.

SCOUTING ARKANSAS
The Razorbacks enter Wednesday night’s match with an 8-9 overall record and a 2-5 record in conference play. The team was left with an obvious void after the graduation of Pilar Victoria (5.47 kills. 2.69 digs per set), but did return quality attackers with Hailey Dirrigl, Elizabeth Pamphile and Regan Robinson, who all accounted for at least two kills per set for 2017. Dirrigl has stepped up her game in a big way, leading the team with 3.58 kills per set heading into Wednesday, and Arkansas has four other attackers chipping in two or more kills per set. The team has been strong defensively as well, though its blocking numbers are lower than in 2017, libero Okiana Valle spearheads a back-line defense that averages 14.27 digs per set and holds opponents to a .205 hitting percentage.

LAST TIME VS. THE RAZORBACKS…
The Gamecocks lost 3-1 at home to Arkansas on Nov. 12, 2017. South Carolina held Pilar Victoria, then the NCAA’s kills leader, to just 13 kills and a .146 hitting percentage, but Arkansas out-hit the team .270 to .248, including a combined hitting percentage of .344 in the final two sets.

SCOUTING GEORGIA
The Bulldogs have had a busy SEC season so far, going five sets in six of its first eight conference matches. With only Sunday’s match on the schedule this week, the team will have some time to catch its breath and focus on breaking a three-match losing streak that featured five-set losses to Florida and Texas A&M and a loss at LSU. Georgia features one of the best offenses in the conference, led by standout pin hitters T’ara Ceasar (4.31 kills per set) and Rachel Ritchie (3.54 k/s). Leading the offense is setter Meghan Donovan, who paces the SEC with 11.27 assists per set. Defensively, libero Kendall Glover ranks fourth in the conference with 4.20 digs per set.

LAST TIME VS. THE BULLDOGS…
South Carolina ran its win streak to nine matches in dramatic fashion in the first meeting of the season, erasing a 2-0 deficit to defeat Georgia on its home court on Sept. 30. Four different Gamecock attackers tallied double-digit kills, with Mikayla Shields (14 kills, 14 digs) and Mikayla Robinson (11 kills, 11 blocks) recording double-doubles. It was the team’s first win after trailing a match 2-0 since 2016, when it came back at Mississippi State, and the third win in Athens in its last four trips.

MENDOZA ENJOYING STRONG 1ST SEASON at SC
Tom Mendoza became the 13th head coach in Gamecock volleyball’s 46-year history on Jan. 3, 2018. Mendoza spent 2016 and 2017 as head coach at High Point University, where he led the Panthers to back-to-back NCAA tournament appearances. In 2017, the Panthers were in rare company as a mid-major program earning an at-large bid to the NCAA tournament. In the postseason, Mendoza was named the Big South’s and AVCA Southeast Region’s Coach of the Year. Already this season, South Carolina has surpassed its overall and home win total from 2017 and have matched its SEC win total.

ROBINSON TALLIES 2ND SEC HONOR FOR 2018
Sophomore Mikayla Robinson earned her second Defensive Player of the Week honor of the season on Monday, Oct. 1, after the middle blocker averaged 2.12 blocks and 2.50 kills per set in wins at Alabama and at Georgia. She is the first Gamecock since Paige Wheeler in 2011 to earn defensive honors twice in a single season. Robinson leads the team with 1.02 blocks per set and a .295 hitting percentage.

KOEHLER SETTING HER SIGHTS ON SC RECORDS
Junior Courtney Koehler has guided the team’s offense as its lone setter for the past two seasons, and her production has her leaping up the program’s record book. The Asheville, N.C. native moved into the program’s all-time top 10 for career assists this season and she currently sits eighth overall in Carolina’s 46-year history and second among setters in the rally-scoring era (since 2001). Koehler’s 2017 total of 1,123 assists put her third in for most in the era, and she currently ranks fifth in the SEC with 9.82 assists per set this season.

SERVICE WITH A SMILE
A key factor in the team’s strong start this year after a 12-18 record in 2017 has been in the service game. Both while serving and receiving serves, the Gamecocks have seen better consistency in 2018, thanks to the development of Jess Vastine and Aubrey Ezell in year two of their roles, as well as the addition of Addie Bryant. Here are South Carolina’s numbers in 2017 compared to 2018. Through 17 matches, the team is averaging 0.53 more aces per set than in 2017, and have cut it reception errors per set down from 1.47 to 1.24.

MCLEAN, VASTINE REMEDY LEFT SIDE ATTACK
Junior Britt McLean arrived in Columbia this summer after two seasons with Minnesota, and sophomore Jess Vastine saw considerable playing time as a freshman at Carolina, but was relegated to a largely back-row role. The duo has already given a facelift to one of South Carolina’s weaknesses in 2017 – consistent offensive numbers from the left-side attack. McLean and Vastine’s combined numbers (4.77 kills per set, .213 hitting percentage, .371 kill percentage) compare favorably to the combined numbers of the Gamecocks’ four main left-side hitters from 2017 (5.54 k/s, .153 hitting percentage, .308 kill percentage).

IRON WOMAN
Aubrey Ezell is on an impressive streak for the Gamecocks. The senior has not missed a single set in her career, entering Wednesday on a stretch of 108 matches played. Currently, her 398 total sets ranks 8th in the rally-scoring era and 108 matches rank 11th, but no other player has played as many consecutively.

DOUBLE-DOUBLE THE TROUBLE
After going for 11 kills and 13 digs against Florida on Oct. 12, Mikayla Shields moved past Kelly Morrow (1993-96) and up to 17th in program history for career double-doubles. Teammate Aubrey Ezell ranks 15th on the career list with 22 – only six Gamecocks total have gone over 20 career double-doubles in the last 15 years.

SHIELD BEARER
Last season, Mikayla Shields became the third sophomore in the program’s 45-year history to make it to 700 career kills. In the Sept. 23 win over LSU, Shields moved past 900 career kills, making her the seventh Gamecock in program history to reach 900 as a junior (despite having 13 matches left to play).

AUBREY ACE-ZELL
Senior libero Aubrey Ezell has at least three aces in nine of the team’s first 17 matches, and ranks fifth in the program’s all-time history. She currently leads the SEC and ranks second nationally with 0.77 aces/set, and is the NCAA’s active career leader.

HOME-COURT ADVANTAGE
The Gamecocks have made the Carolina Volleyball Center one of the toughest venues in the country over the last three seasons. Of the program’s top ten crowds all time in the CVC, nine have come in the last three years and three of the top five have come this season, including a program-record crowd of 3,458 at the Clemson match on Aug. 25. This season, the Gamecocks rank 23rd nationally for cumulative attendance and 24th in average attendance and are 7-1 in the CVC.