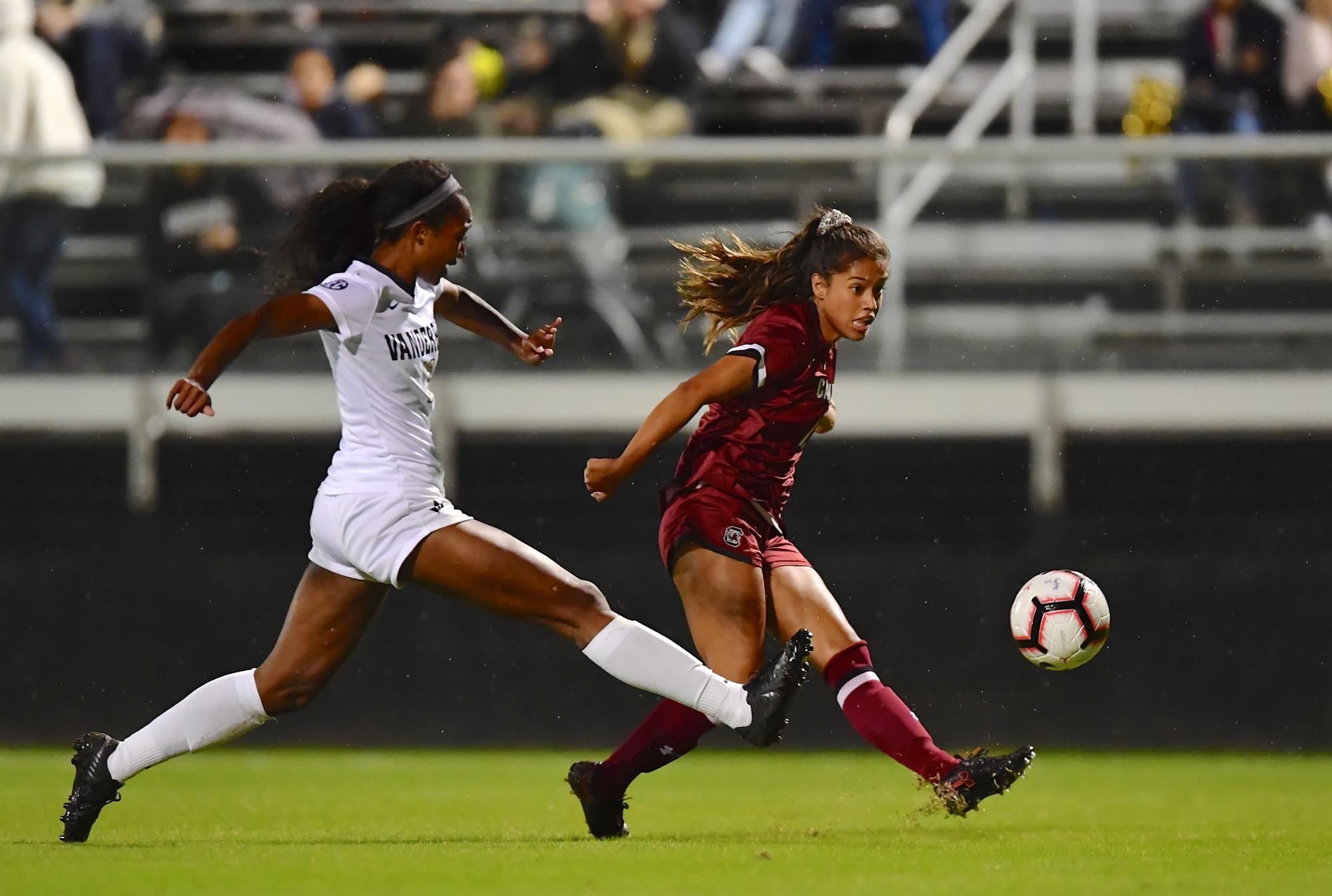 No. 8 Gamecocks Prepped for Missouri, LSU

LAST TIME OUT – VANDERBILT
No. 8 South Carolina played to a scoreless draw with No. 12 Vanderbilt (13-1-1, 6-0-1 SEC) last Friday night. The Gamecocks’ current five-match unbeaten streak is the longest of the season, and marks the third-straight season South Carolina has had an unbeaten streak of at least five.

Junior Mikayla Krzeczowski registered her fifth-consecutive clean sheet against Vanderbilt, tying the longest consecutive shutout streak of her career. She made four saves, keeping Vanderbilt scoreless for the first time since Aug. 16, and just the second time all season.

The draw with Vanderbilt pushed South Carolina’s road record in 2018 to 2-2-1. South Carolina has not lost to Vanderbilt in three seasons, and owns a record of 5-1-4 in the last 10 meetings.

SCOUTING MISSOURI
Missouri (5-8-2, 2-4-1 SEC) is currently in a stretch in which it has lost four of the last five matches. The Tigers’ latest match was with Auburn, a match they lost 1-0. Missouri’s two SEC victories have came against Kentucky and against Ole Miss while earning a 0-0 draw with Georgia.

South Carolina has won each of the past three matches against the Tigers by a combined score of 5-1. Back in 2015, Simone Wark earned the game-winning goal while Grace Fisk earned the gamewinner in 2017.

Junior Sarah Luebbert and freshman Julissa Cisneros each have scored three goals to lead the Tiger offense. Cisneros has been on a recent tear, scoring in two of the last three matches, including scoring both goals for Missouri in its 2-1 win over Ole Miss. Missouri sits near the bottom of the conference in goals and assists, but the Tigers’ 14.14 shots per match is in the top half of the SEC this season.

Senior Kelsey Dossey has started all but one match this season for the Tigers. She owns a 1.19 goals against average this season and makes an average of 3.86 saves per match. The Tigers have been booked with 16 yellow cards this season and a pair of red cards, both the most of any SEC team this season.

Missouri was selected to finish 10th in the SEC in the preseason coaches’ poll.

SCOUTING LSU
LSU (9-5-1, 3-3-1 SEC) has won its last two matches, with a 2-1 win over Missouri and a 3-1 win over Ole Miss. The Tigers have faced two ranked opponents prior to the Gamecocks, dropping a match to No. 5 Texas A&M and earning a draw with No. 9 Auburn. LSU has been tough at home this season with a 6-1-1 record and an unbeaten streak up to seven matches, with the last loss in the season opener against Villanova, 2-1. South Carolina’s record against LSU in the last eight matches is 5-0-3.

Sophomore Adrienne Richardson has played all 15 matches for LSU and has scored a team-high six goals while adding an assist for a total of 13 points. Her 56 shots easily leads the team and is the third most in the SEC this season by an individual. Offensively, LSU sits in the middle of the SEC in goals, assists and total points.

Senior goalkeeper Caroline Brockmeier has started all 15 matches for the Tigers this season and owns a goals against average of 0.97, the eighth best in the SEC this season. Brockmeier’s 62 saves this season ranks her second in the SEC. She has allowed a total of 15 goals this season with eight coming in the last five matches.

LSU was selected to finish 11th in the SEC in the preseason coaches’ poll.

ANOTHER ONE
Krzeczowski is just one away from breaking another record, this one the SEC career shutout record, currently held by Megan Rivera of Auburn. Her five SEC shutouts is the most since conference play began, and eight on the season has her tied for second among SEC goalkeepers. Krzeczowski’s 0.30 goals against average in league play is the best in the SEC.


GAMECOCKS IN THE POLLS
On Tuesday afternoon when the weekly United Soccer Coaches poll was released, South Carolina moved up one spot to No. 8 after the 0-0 draw with Vanderbilt. In the Top Drawer Soccer poll, Carolina remained at No. 7.

South Carolina moved down two spots to No. 9 in the latest NCAA Women’s Soccer RPI. The SEC has the most teams inside the RPI top 10 with three (South Carolina, Texas A&M and Mississippi State).

PUTTING THE TEAM ON HER BACK
Junior defender Grace Fisk was named to TopDrawerSoccer.com’s National Team of the Week for her performance against Vanderbilt. During the match, Fisk was able to prevent a potential game-winning goal by registering a team save after the ball had slipped by Krzeczowski’s outstretched arms. Fisk’s defensive presence has been impactful since she rejoined the team back on September 2. The Bromley, London, native, has been a part of eight clean sheets in 10 matches, and has scored one goal and added an assist.

NOT IN OUR HOUSE
In nine home matches, South Carolina has allowed just one goal. That goal came back on Sept. 2 against Purdue in the 88th minute. Since then, no team has registered a goal in over 451 minutes in Columbia.

WE’RE NUMBER ONE
South Carolina women’s soccer remained at the top of the average attendance list in NCAA Division I at 2691. The Gamecocks have registered over 2000 fans in each of the last two matches and eight of the last nine at Stone Stadium. The match between South Carolina and Clemson on Aug. 23 is still the largest crowd to witness a women’s soccer match this season at 6354.

THE RACE FOR THE SEC
With three SEC matches to go for each squad in the SEC, the Gamecocks sit in a tie for second place with Texas A&M and three points behind first-place Vanderbilt. South Carolina has finished in the top five in the SEC each of the past five seasons.

UP NEXT
South Carolina will wrap up the regular season with No. 5 Texas A&M on Thu., Oct. 25 at 7:00 p.m. at Stone Stadium. The match can be seen on the SEC Network. The Gamecocks then will gear up for the SEC Tournament, which begins on Sun., Oct. 28, in Orange Beach, Ala.