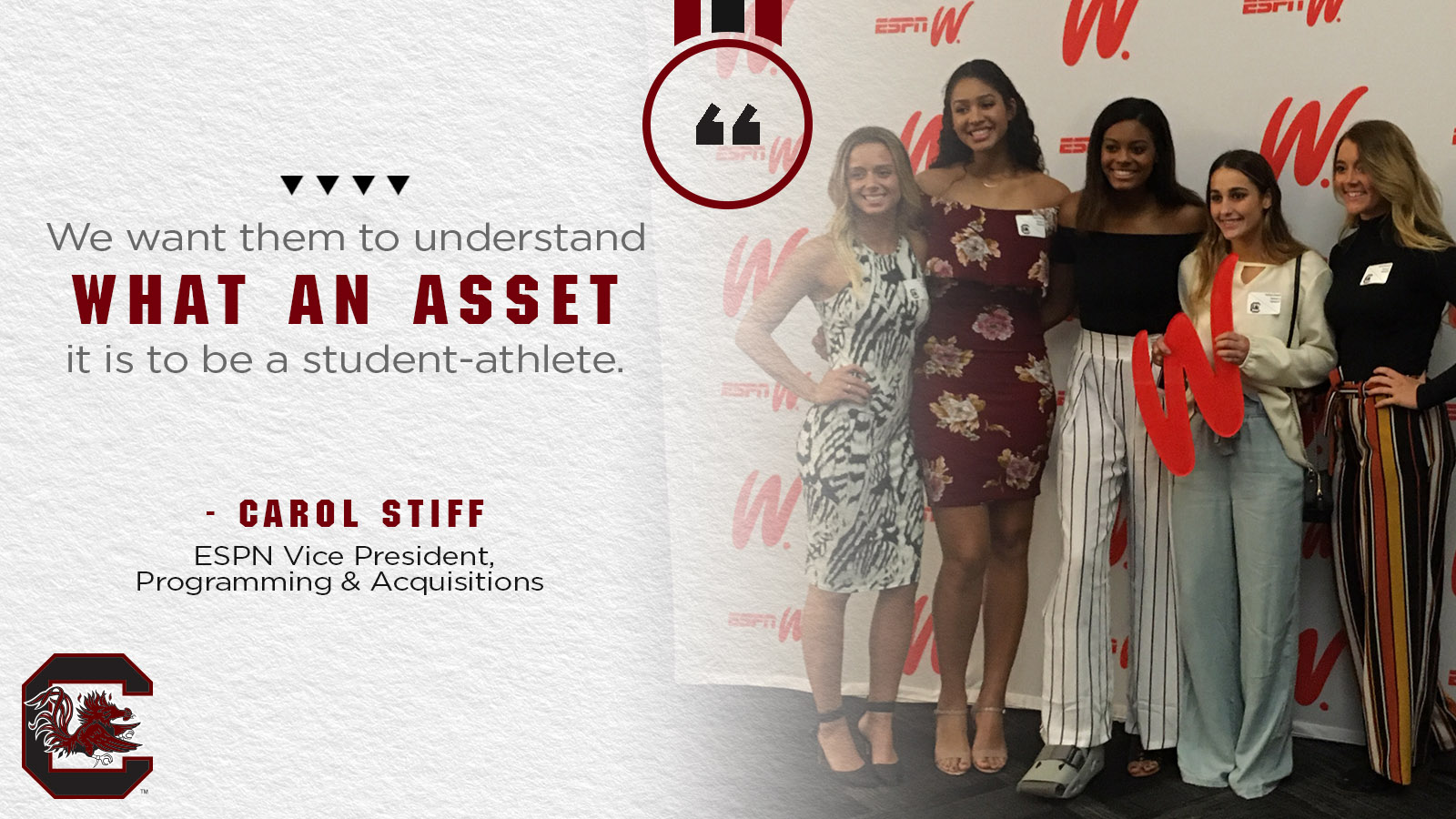 Female student-athletes from every South Carolina sport took part in espnW’s Campus Conversation Monday night in The Zone at Williams-Brice Stadium. The collaborative event between espnW and South Carolina Athletics was a panel forum with discussions aimed at supporting, educating, and inspiring female student-athletes during their collegiate careers and prepare them for life after college.

“The purpose is to meet with student-athletes and talk about the pivots that we make in life, whether you’re a freshman going into your sophomore year or a senior going out in the real world,” said Carol Stiff, Vice President of Programming and Acquisitions for ESPN. “We’re here to share some great experiences. We want them to understand what an asset it is to be a student-athlete, and all the attributes that they have, including time management, hard work, dedication, and the ability to take criticism and feedback. All of those are assets you need for the real world.”

“We have breakout sessions by class year, and we do that, so they can have those age-specific discussions,” said Jane Bullock, Associate Director of Strategic Operations for ESPN. “We find that a lot of seniors feel a sense of loss when they’re graduating because they’re without their ‘wolfpack or’ friends or their team, and that can be a lonely feeling.”

Basketball television analyst LaChina Robinson served as moderator for the discussion, with the panel consisting of South Carolina alumni, including Rosalyn Durant (1999), Senior Vice President of College Networks at ESPN, Aisha Taylor, who was a captain of the 2002 National Champion track and field team and is now Commissioner for the South Carolina Workers’ Compensation Commission, and former soccer student-athlete Claire Studebaker(2013-16), who is now a student at University of South Carolina School of Medicine.

“I was invited back to pay it forward,” Studebaker said. “I was excited to be asked to try to give back to the University that has invested so much into me. We’ve all seen the NCAA commercial about how we go pro in something other than our sports, so we’re talking a lot about those transition or pivot points in life, how to navigate those and use your skills as a student-athlete to play up your strengths that will make you a better job or graduate school candidate.”

“It makes me think more about my future, what my next step is, and how I go about doing that.”
– Grace  Fisk, Junior, Women’s Soccer


“As a former student-athlete, I remember my days of participating on the basketball court and the classroom at Wake Forest,” Robinson said. “Unfortunately, that time comes to an end. I remember my transition to the real world, and it wasn’t very smooth. I want to come back and have conversations with women who are in that position and are wondering what’s next and what life is going to be like.”

Panelists were frank in discussing difficulties they had in transitioning to life after being a student-athlete, and the Gamecock student-athletes left with optimism while also understanding that they are responsible for creating a personal brand that is desirable for future employment and post graduate education. 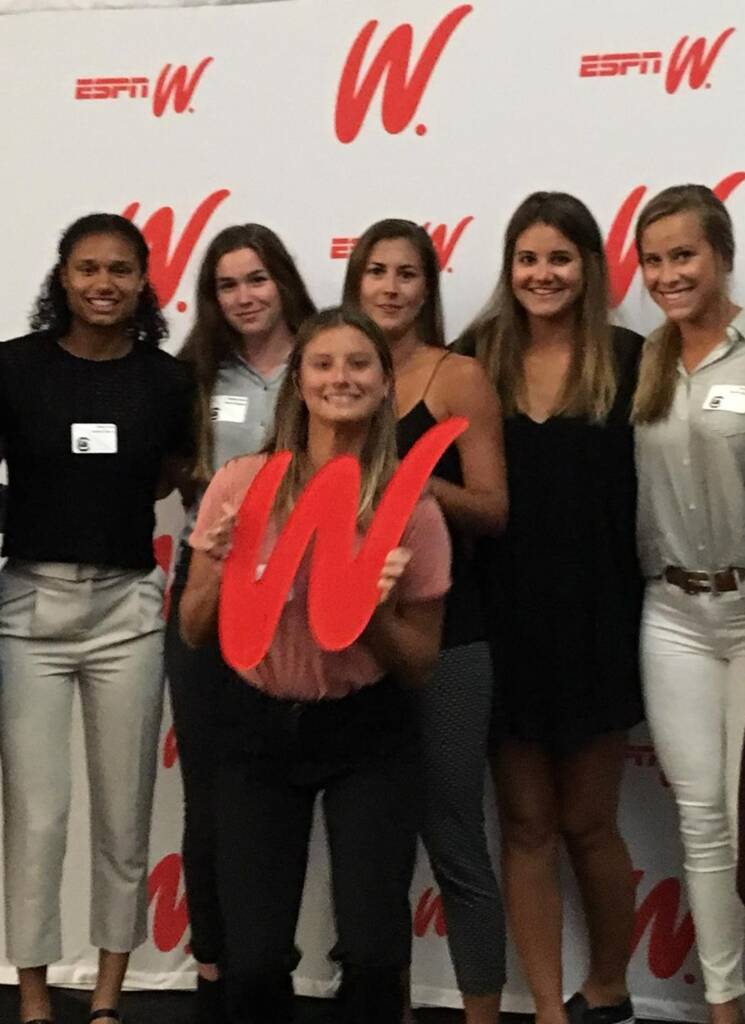 “I loved it,” said beach volleyball junior Franky Harrison, who is studying public relations. “I thought all the women were empowering and super-inspiring! What they had to say was so relatable to all sports. That was the best part of it. I related to everything they were saying. It was cool to hear that they were all in different stages of their lives with one who had just graduated and another who had graduated nearly 20 years ago. They really showed us that there is a light at the end of the tunnel and that being a student-athlete is a great stepping stone for our next chapter in life.”

“I’m still not 100 percent sure what I’m going to do after graduating in December, so it was nice to talk to people that went through the same thing,” said Emma Lock, a redshirt junior psychology major from the volleyball team.

The event was interactive with a wide variety of topics discussed in the panel discussion and breakout sessions, including how to best position yourself to get a job after graduation, how to find time for an internship with your athletics commitment, how to network or find a mentor, and what to do if you have no idea what you want to do after graduation.

“One of the things we talk about is the power of being a woman,” Bullock said. “We have a wide variety of ages on the panel because they have different levels of experience, all of which are relevant in different ways.”

“Never in your life will you have so many people who are invested in your success as you have right now as student-athletes,” Robinson told the assembled student-athletes during the panel discussion.

Monday’s event marked the 22nd campus that espnW had visited for the series of discussions with the aim of engaging and inspiring people through women’s sports.

“It was really good to listen and learn about the experiences of people who were in the exact same shoes as us,” said junior women’s soccer student-athlete Grace Fisk, who is studying criminology. “The main thing I heard a few times was that it’s OK not to know exactly what’s going to happen next. Opportunities arise when you’re not expecting them, but you have to make the effort to have those opportunities happen as well. It makes me think more about my future, what my next step is, and how I go about doing that.”

“It made me think more about what I want to do after college and figure out a plan,” said junior women’s basketball student-athlete Te’a Cooper. “They talked about how they were all clueless at some point when they got out of college. It made me think a lot.”