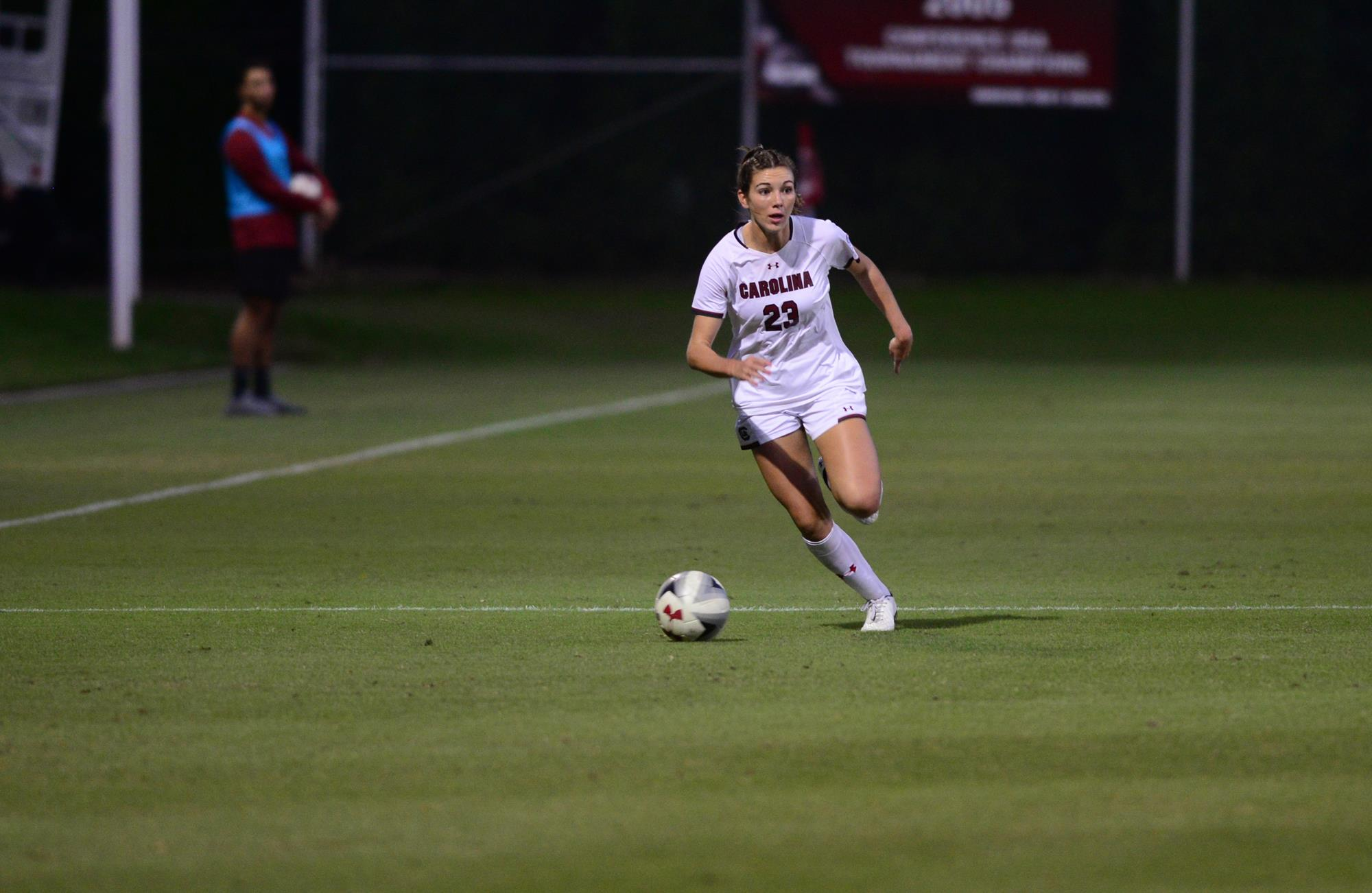 No. 14 Gamecocks To Wrap up Regular Season with No. 15 Texas A&M

Sophomore Luciana Zullo netted her first goal of the season in the victory over Missouri on Thursday. The sophomore has had a total of 15 shots in the last three matches, almost half of her season total. Mikayla Krzeczowski registered her sixth-consecutive clean sheet in the win over Missouri, breaking the longest consecutive shutout streak of her career.

“The moment [Lauren] Chang got her head up, I knew she was going to hit a diagonal ball with her foot,” Zullo said after the match. “I just did my job and got on the end of it and beat the outside back and did my best to finish. It just shows anyone on our team can score any given day.”

Against LSU, the Gamecocks earned a penalty kick early in the second half to take a 1-0 lead over the Tigers. Chang converted the penalty kick after freshman Riley Tanner drew the foul in the box. South Carolina went on to lead for nearly the entire second half before LSU scored with 1:07 to go in the match, forcing overtime.

LSU went on to score the gamewinner in the second overtime, the first double overtime loss for the Gamecocks since Oct. 22, 2015, against Florida in Gainesville.

SCOUTING TEXAS A&M
Texas A&M (14-3-1, 5-3-1 SEC) is currently in a stretch in which it has lost each of the last two matches. The two-match losing streak is the first time that the Aggies have lost consecutive regular-season matches since 2016 when they lost to Tennessee and Ole Miss, both on the road. The latest loss for Texas A&M was its first loss at home, moving its record to 11-1-0 in College Station.

South Carolina has won each of the past three matches against the Aggies, and has not lost since 2013 in the SEC Tournament. The Gamecocks trail in the all-time series with a 3-5-1 record since the two teams played for the first time in 2003.

Junior Ally Watt leads the potent Aggie offense with a total of 12 goals this season, the second most in the SEC this season and tied for 17th in the country. Asdis Halldorsdottir has been dangerous offensively with four goals and five assists this season and a total of 61 shots, with 18 on goal. Texas A&M runs an aggressive offensive attack; the Aggies have been called offside 31 times this season, which leads the SEC.

Texas A&M was selected to finish second in the SEC in the preseason coaches’ poll.

KEEP THE RECORDS COMING
Krzeczowski broke the 14-year SEC career shutouts record held by Megan Rivera of Auburn against Missouri when the Gamecocks shut out the Tigers 1-0 at home. Her six SEC shutouts is the most since conference play began, and nine on the season has her tied for the most among SEC goalkeepers. Krzeczowski’s 0.45 goals against average in league play is the second best in the SEC.

GAMECOCKS IN THE POLLS
On Tuesday afternoon when the weekly United Soccer Coaches poll was released, South Carolina fell to the No. 14 spot after its pair of results over the past weekend. In the Top Drawer Soccer poll, Carolina dropped three spots to No. 10.

South Carolina moved down to No. 16 in the latest NCAA Women’s Soccer RPI.

NOT IN OUR HOUSE
In 10 home matches, South Carolina has allowed just one goal. That goal came back on Sept. 2 against Purdue in the 88th minute. Since then, no team has registered a goal in over 541 minutes in Columbia.

THE CHANG SPECIAL
Lauren Chang added to her team high in goals over the past weekend. Her penalty kick goal gave her six on the season, which is three times the amount she had during her freshman campaign. Her improvement this season is the largest of anyone on the South Carolina roster this season.

TOUGH COMPETITION
This season, South Carolina has kept its schedule as tough as they come in the country. Against seven 2017 NCAA Tournament participants, the Gamecocks own a 5-1-1 record. Texas A&M will add another team to that record this season. The Gamecocks also earned a draw with South Florida in exhibition play, another participant in the 2017 NCAA Tournament.

UP NEXT
Following the Gamecocks’ regular-season finale on Thursday, South Carolina will learn its opponent in the SEC Tournament that will be held in Orange Beach, Ala., from Tue., Oct. 30, until Nov. 4. South Carolina will then wait for the NCAA Selection Committee on Mon., Nov. 5, for any potential NCAA Tournament matches. The start time for the Selection Show is still to be determined.