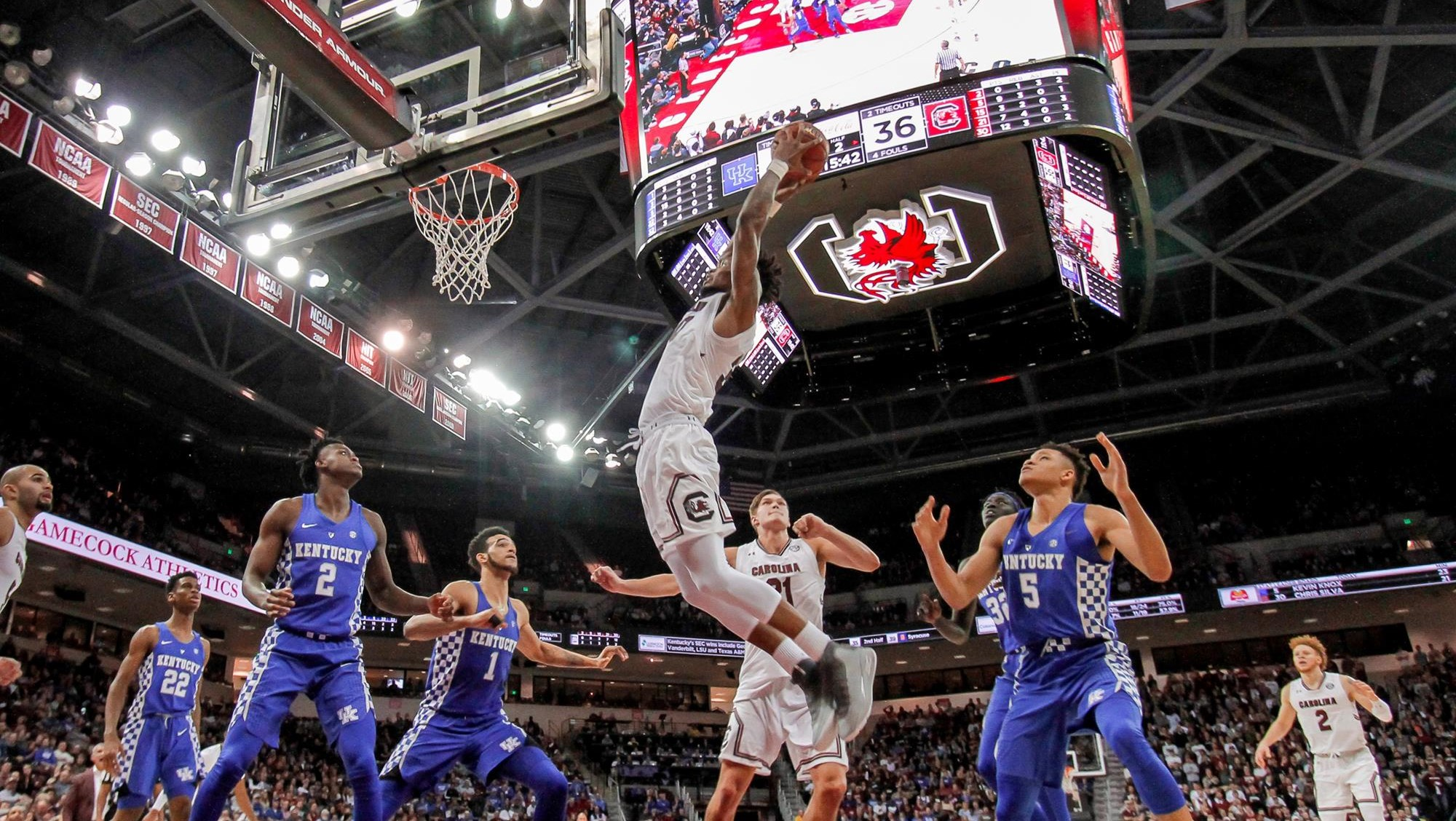 COLUMBIA, S.C. – Gamecock men’s basketball is set to host Augusta University on Friday evening at Colonial Life Arena in its lone exhibition contest of the 2018-19 campaign.  Tip time for the free admission matchup is set for 6 p.m. ET.

PARKING INFORMATION
Parking will be available for Friday night’s exhibition for $10 in the Discovery Garage, as well as in Lot B.  Additionally, season parking passes for Lots A and B will be honored.

BROADCAST INFORMATION
Friday night’s exhibition contest will be broadcast audio only on the Official South Carolina Gamecocks app, which is free to download, and it will also be broadcast on Tune In and Gamecocks All-Access (subscription required) via GamecocksOnline.com.  Listen in as Voice of the Gamecocks Derek Scott calls the exhibition action.

FRANK MARTIN ON FRIDAY’S MATCHUP
“As we get the 2018-19 season going against Augusta it will be a whole lot of fun to get on the court with our guys against a very good basketball team, a very good basketball program that has consistently competed amongst the best in D-II.  [Augusta head coach] Dip Metress does a tremendous job and they have four or five very experienced players that he is very excited about moving into this season.  Their team actually reflects our team; a group of very experienced players and a bunch of first-year freshmen.

“Going into this game, my two biggest keys that I want to really pay attention to; number one, offensively, are turnovers.  With so many new guards, getting wrapped up in the moment, playing too fast, taking shots that aren’t very good or turning the ball over, that is my offensive key – I want to make sure we are good there.  And then defensively, our ability to do two things – get to shooters, but not get beat off the dribble.  Because of our inexperience once again in guard play, that can be a problem for us as we start off the season.”

SCOUTING THE GAMECOCKS
A talented group of newcomers join a core group of veterans in the locker room for the Gamecocks this season.  Leading the bunch is senior forward Chris Silva, who returns as Carolina’s top scorer (14.3 points per game) and rebounder (8.0 rebounds per game) from a season ago.  Fellow senior Hassani Gravett returns after pacing the Gamecocks with 3.6 assists per game last season, as do fellow starters, junior forward Maik Kotsar and sophomore forward Justin Minaya.  Overall, Carolina returns 64.6 percent of its scoring and 75.8 percent of its rebounding from last season.

SILVA GARNERS PRESEASON ACCOLADES
Senior forward Chris Silva, who earned All-SEC First Team, All-Defensive Team and co-Defensive Player of the Year accolades from the SEC’s coaches last season, was voted to the Preseason All-SEC First Team recently by the media.  Silva is the league’s top returning rebounder after pulling down 8.0 per game last season.  For his career, Silva has 15 double-doubles, 55 double-figure scoring games and 39 games with two or more blocks.  He enters the 2018-19 campaign 52 rebounds away from cracking the Gamecock top ten in the career category, he’s tied for seventh with 124 career blocks, and he is five points away from moving to 43rd all-time in scoring at Carolina.

SCOUTING AUGUSTA UNIVERSITY
Augusta returns seven players from last season, including seniors Aaron Byrd, Tyvez Monroe and Deane Williams.  Williams is also the Jaguars’ top returning scorer after averaging 13.0 points per contest last season, while he also paced the team in rebounds (8.1 per game).  Monroe averaged 12.6 points per game last season, while Byrd added 10.1 per outing and hit 42-of-88 attempts from beyond the arc, 47.7 percent.  Six newcomers join head coach Dip Metress’ squad as well.  Metress is in his 15th season at the helm of the Jaguar program.

COMING UP
Carolina will be back on the practice courts next week prepping for the official season opener on Nov. 6 vs. USC Upstate.  Tip time for that contest is 7 p.m. ET on SEC Network+.