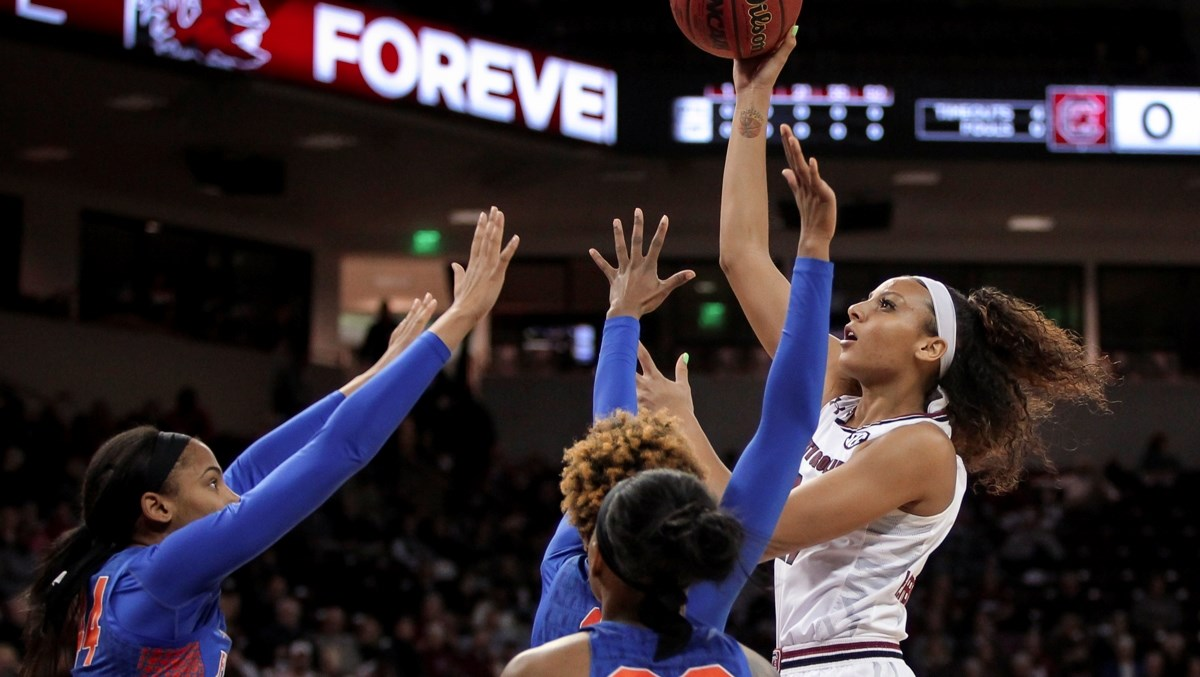 Gamecocks Cruise to 76-53 Win over LSU on the Road

Four Gamecocks scored in double figures in the win with junior guard Te’a Cooperleading offense with 14 points on 5-of-11 shooting in 23 minutes. Senior forward Alexis Jenningsshotan efficient 4-of-6 from the floor to score 10 points while grabbing seven rebounds. Mikiah Herbert Harrigan and Bianca Jackson each added 10 points to round out the Gamecocks’ top scorers.

For the second-straight game, the Gamecocks raced out to an early lead. The 9-0 run to begin the game was led by redshirt-senior Bianca Cuevas-Moore who sank a pair of free throws, but also made a diving play on the defensive end before assisting Tyasha Harris on a 3-pointer. Carolina followed a fast start with a blazing finish in the opening quarter, Herbert Harrigan and Harris each scored a pair of buckets to extend the Gamecock lead to 29-11.

Carolina’s final nine points of the first quarter extended into the second quarter and ended in a 15-2 run. The first-half lead grew to as much as 25 after Jackson hit a three. Carolina’s defense was lock down in the second quarter, forcing an LSU drought during which the Lady Tigers shot 2-of-10 and helped the Gamecocks end the first half with a 45-23 advantage.

The two teams played an even fourth quarter, each scoring 15 points. Nelly Perry connected on an and-one with 2:47 to go, and Jackson reached double figures in the final minute to help the Gamecocks coast to the 76-53 win on the road.

GAMECHANGER
Carolina shot 76.9 percent in the opening quarter that led to a 29-11 lead at the end of the first quarter. The 18-point scoring margin is the largest of any quarter for the Gamecocks in SEC play.

QUOTABLE DAWN STALEY
Staley on 9-0 run to begin the game…
“It was good to have a start like that, especially on the road. I just thought we were playing well on both sides of the ball and sometimes [a run] like that happens. It doesn’t happen very often, but when it does, you celebrate the things that went well.”

KEY STAT
The Gamecocks forced 13 LSU turnovers that led to 18 points during the game, including seven during the Gamecocks’ 9-0 run to begin the game.