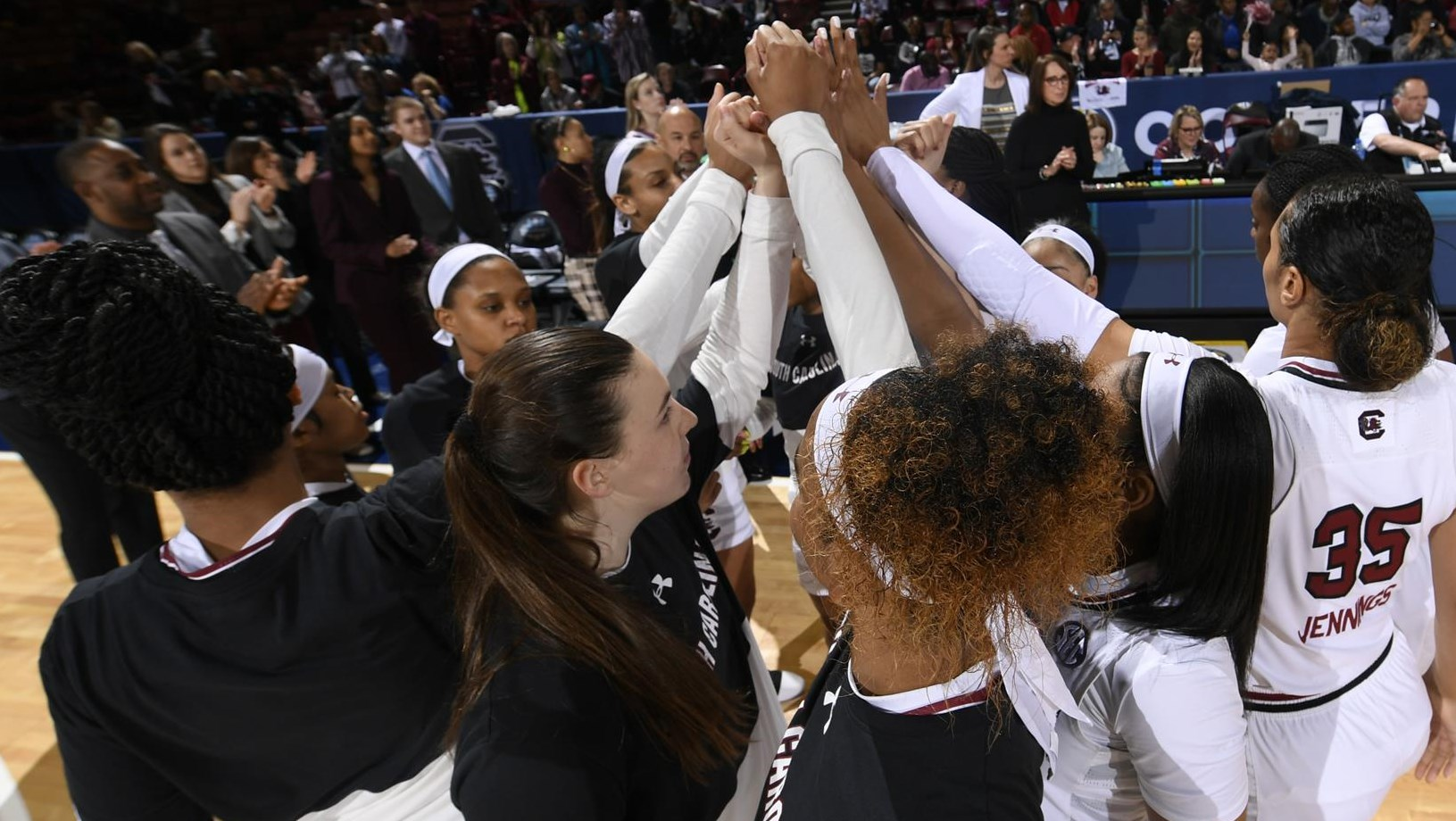 COLUMBIA, S.C. – No. 12/13 South Carolina dropped a 95-89 decision to Arkansas in the quarterfinal round of the SEC Tournament at Bon Secours Wellness Arena Friday night. Juniors Tyasha Harris and Mikiah Herbert Harrigan scored 24 and 27 points, respectively, including a combined 20 in the Gamecocks’ 35-point third quarter to five the Gamecocks a one-point leading heading into the final period.

The game was marked by decisive runs by both teams, although they traded the lead just eight times in the game, largely in the opening quarter.

The first quarter was the most back and forth of the four, and a 6-0 Arkansas run closed it out to give the Razorbacks a 22-21 lead through 10 minutes. South Carolina was shooting well, 9-of-17 (.529), but struggled to stop the Razorbacks.

The second quarter brought more of the same. After Alexis Jennings scored four straight points to give South Carolina a 28-27 lead, Arkansas answered with a 10-0 run thanks to a pair of turnovers and three one-and-done possessions by the Gamecocks. Trailing 28-37 with 3:25 to go until halftime, Herbert Harrigan went to work.

The Gamecocks’ versatile junior forward went on a personal 7-2 run, scoring on a pair of jumpers and hitting three free throws. The run continued through the end of the half with a transition layup from Destanni Henderson and a drive from Herbert Harrigan. Arkansas got a big bucket from Kiara Williams to close the period and take a 43-39 lead into halftime.

Arkansas hit five 3s in the opening five minutes of the third quarter, but the Gamecocks had begun firing from outside as well, keeping the Razorbacks within reach. After Malica Monk scored on back-to-back possessions, Arkansas had a double-digit lead, 63-53. Again, Herbert Harrigan answered the challenge, launching a 21-10 run with six straight points, a blocked shot and a forced turnover.

Once Herbert Harrigan’s run brought the Gamecocks within four, Harris took over, scoring on the next three possessions to make it a one-point game with just under two minutes left in the period. As the Razorbacks went back to the SEC’s second-leading scorer in Chelsea Dungee, the Gamecocks went inside to Jennings. The two traded baskets over the next three possessions until a misfire by Arkansas was pulled down by Doniyah Cliney, who found Harris for a deep 3 at the buzzer that banked in to put South Carolina on top 74-73 heading into the final 10 minutes.

Both teams struggled shooting the ball in the final period, but Arkansas used eight second-chance points to stay in front throughout. Trailing by eight, 89-81, with 90 seconds remaining, the Gamecocks continued to fight. In 21 seconds, Harris hit a pair of free throws and then a layup off a steal to cut the deficit to four, 89-85, with 1:09 to play. Arkansas hit a pair of free throws, and Henderson made 1-of-2 from the line. Two more Razorback free throws made it 93-86, which Herbert Harrigan cut nearly in half with a three from the top of the key. The Gamecocks came up with two more big defensive plays, but could not convert on the other end to pull to leave the comeback short.

GAMECHANGER
The Gamecocks gave up eight second-chance points in the fourth quarter and shot just 23.5 percent from the field (4-of-17) to allow Arkansas to hold off a South Carolina comeback.

KEY STAT
South Carolina allowed Arkansas to hoot 11-of-22 from 3-point range after holding the sharp-shooting Razorbacks to just 5-of-20 from beyond the arc in their regular-season meeting on Feb. 3.


UP NEXT
The Gamecocks (21-9, 13-3 SEC) await their NCAA Tournament assignment, which the committee will announce on Mon., Mar. 18, at 7 p.m. South Carolina has bid to host first- and second-round games at Charlotte’s Halton Arena, if they remain one of the top 16 seeds in the event.