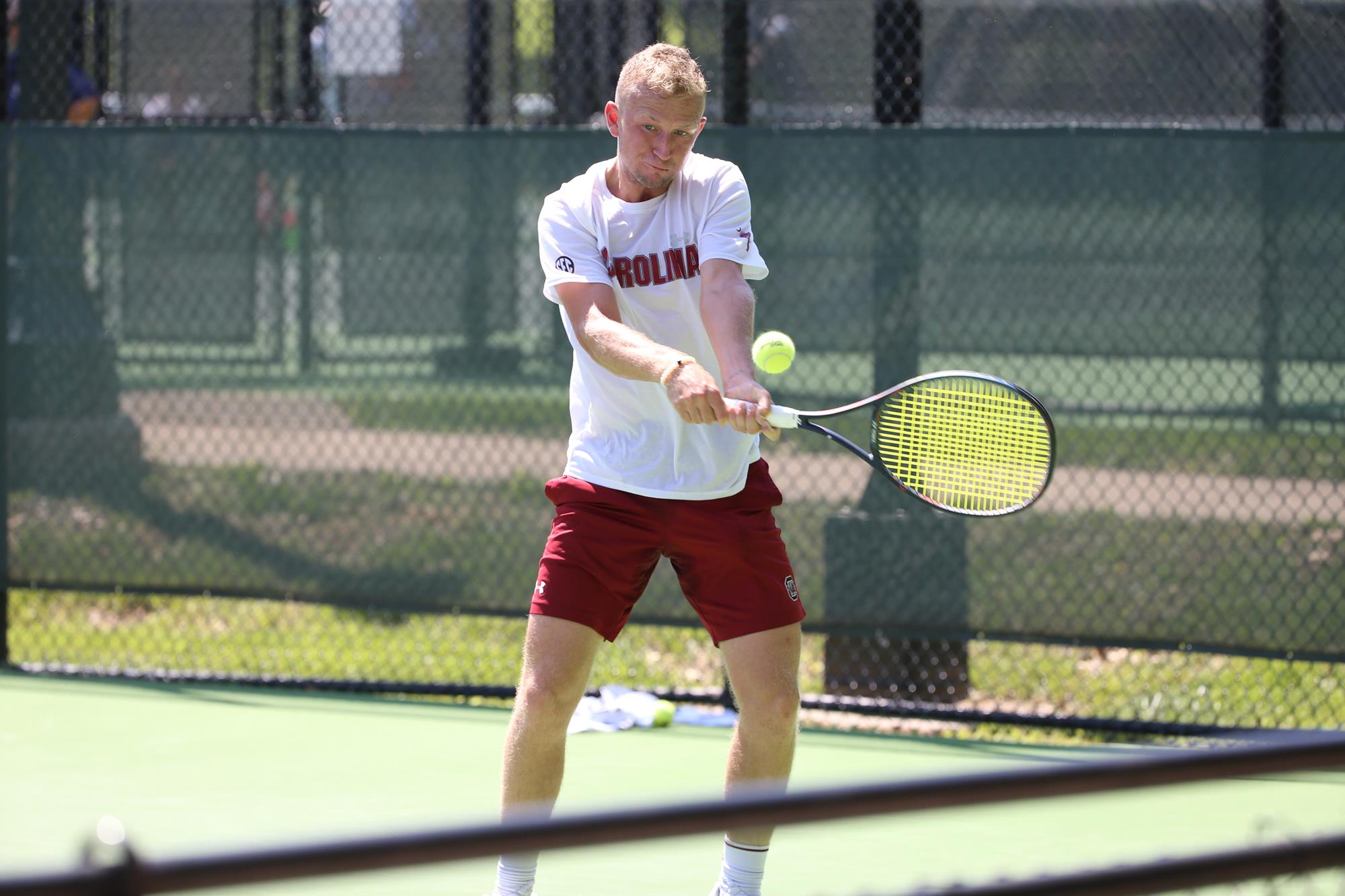 Gamecocks Advance to NCAA Second Round

CHARLOTTESVILLE, Va.— No. 17 South Carolina took control of its NCAA Championships first-round match early and used the momentum to hold off ETSU 4-0 Friday morning at the Sheridan Snyder Tennis Center in Charlottesville, Va. The Gamecocks advance to face either No. 5 Virginia or St. John’s in the second round.

“I was impressed with the way our guys came out form the start today, considering it was the NCAA first round against a really confident team in ETSU,” South Carolina head coach Josh Goffi said. “They stood firm and played on their terms, and everyone is excited to get after it tomorrow.”

South Carolina (18-9) won the doubles point for the 16th time in its 27 matches with wins in the top two spots. The No. 2 tandem of Paul Jubb and Yancy Dennis rode an early break, while the Daniel Rodrigues and Raphael Lambling used a late break and great returns from Rodriguez win at the top of the order.

Singles got off to an auspicious start with Jubb and Rodriguez dropping their opening service games, but both eventually recovered to win their sets. Five Gamecocks took their first sets to put ETSU on its heels, and Rodriguez, Thomas Brown and Jubb delivered the points to put South Carolina into the NCAA second round for the third time in as many seasons.


DOUBLES:
Jubb and Dennis sprinted out to a 3-0 lead over Yusuf Khamis and Frazier Rengifo at the No. 2 spot before several games went to deuce to slow down the match’s progress. The first such game came on Jubb’s service game that saw Dennis’ quick hands at the net deliver the deuce point for a 4-1 lead just before Rodrigues and Lambling solved Miguel Este and Juan Lugo with a break to go up 4-2 on Court 1.

The top of the lineup delivered the win on another service break as Rodrigues’ great return set up the first match point a 40-30. Two points later, he cracked another solid return for the winner and a 6-2 decision for the 52nd-ranked doubles team in the nation.

With Court 3 back on serve 5-4 after an early Gamecock service break, the No. 2 match teetered on the same fate with Jubb serving with a 5-3 lead but in a Love-40 hole. The South Carolina duo battled back with Dennis picking off a return at the net to get to deuce and a strong serve yielding a return error for the 6-3 victory that put the team up 1-0 heading into singles.

SINGLES:
While ETSU struck first in the top two spots, the rest of the Gamecock lineup was steady early in singles. Brown broke Este in his opening game for an early lead.

Rodrigues was the first to get things turned around as he won turned a 1-2 deficit into a 4-2 advantage in the No. 2 match just as Lambling posted his first break for a 3-2 lead over Juan Lugo in the No. 3 match.

Rodrigues and Brown closed out their first sets 6-2, and the momentum helped Jubb get back on serve at 4-4. Moments after Lambling claimed his first set 6-3, Dennis scored his first service break over David Gonzalez for a 5-3 lead that became a 6-3 first-set win when he held at Love to give the Gamecocks four of the first five first sets decided.

On Court 1, Jubb and Rengifo were still battling out their opening set, trading service breaks until Jubb got the hold to go up 6-5. Renifo fought off two break points in the next game to get to deuce, but Jubb ended it coming in off a short ball to hit a quick volley and win the set 7-5.

While Jubb was closing out his first set, Rodrigues, Dennis and Brown all scored service breaks early in their second sets. Rodrigues and Dennis continued to hold serve, but Este got back on serve against Brown at 2-2.

Rodrigues was the first to wrap things up 6-2, 6-3, and Jubb pounced on a disappointed Rengifo with a quick 4-1 lead in their second set.

Lambling, Dennis and Brown were on serve late in their second sets in the Nos. 3, 5 and 6 matches, respectively, as ETSU tried to hold on. The veterans at the top and bottom of the Gamecocks’ lineup would not be denied, though.

Brown’s steady play earned him a late service break to claim his No. 6 match 6-2, 7-5, and just moments later, Jubb finished off Rengifo 7-5, 6-3 to clinch the team victory.

Up Next for the Gamecock
South Carolina awaits the winner of Friday’s second match in Charlottesville between No. 5 Virginia and St. John’s. The second-round match will be played on Saturday at 1 p.m.