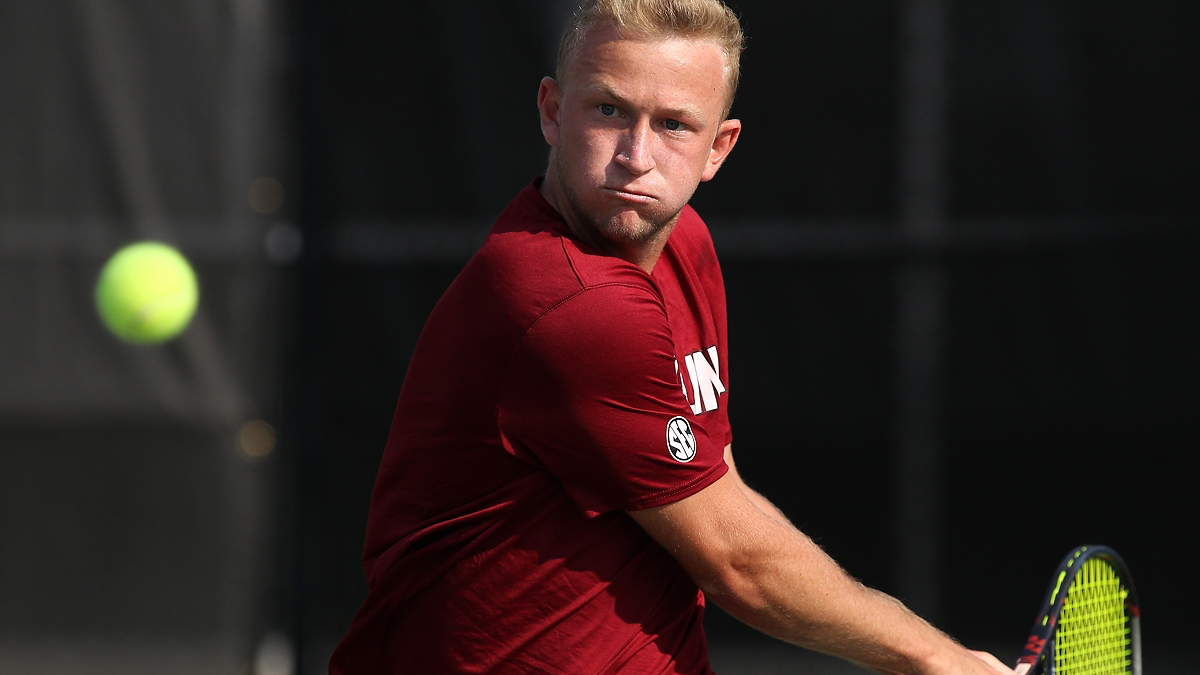 CHARLOTTESVILLE, Va.— No. 17 South Carolina closed its season with a tight 4-1 loss at No. 5 Virginia in the NCAA Championships second round Saturday afternoon. The Gamecocks (18-10) got off to a tough start but had their foot on the gas midway through singles before running out of road to finish their comeback.

Doubles action was dominated by service breaks on Courts 2 and 3. The Gamecocks’ veteran duo of Paul Jubb and Yancy Dennis overcame an early break in the No. 2 match to get back on serve at 2-2. The two sides traded breaks over the next four games, but by the time Jubb logged another hold, the Cavalier’s No. 3 team had closed out its victory to deliver the doubles point to the home side.

In singles, Virginia took four opening sets, including in the top two spots in the lineup. Jubb quickly leveled his No. 1 match at a set apiece as Raphael Lambling and Thomas Brown were headed toward straight-set victories and Dennis surged ahead in his second set. The Cavaliers locked in down the stretch, though, closing the door on the Nos. 6 and 2 matches and rallying for comebacks against Lambling and Dennis.

DOUBLES
Virginia struck first with service breaks in the first games of the Nos. 1 and 2 matches, but the Gamecocks earned the first break in the No. 3 contest.

No. 33 Brandon Nakashima and Henrik Wiersholm rode their early break to the end to post a 6-2 win over No. 52 Daniel Rodrigues and Raphael Lambling at the top of the lineup.

In the No. 2 match, junior Paul Jubb and senior Yancy Dennis were well in the battle against Carl Söderlund and Aswin Lizen. They got back on serve at 2-2 just as freshmen Beau Pelletier and Jake Beasley traded breaks with Gianni Ross and William Woodall on Court 3 to set on serve at 3-2.

Court 2 went back and forth with no one able to hold serve over a five-game stretch before Jubb final consolidated a break with a hold to go up 5-4. The Cavaliers’ more experience No. 3 tandem pounced on the tight situation on Court 3, though, winning the final three games to close out the 6-3 win and the doubles point.

SINGLES
Singles began as doubles had with early breaks of serve, but two of those went the Gamecocks’ way as Yancy Dennis and Thomas Brown on Courts 4 and 5, respectively, took early leads in their matches.

Playing in the No. 5 spot, Brown added another break four games later en route to a 6-3 first set over Ryan Goetz, which countered 6-3 first sets going to the Cavaliers on Courts 1, 2 and 6. Virginia’s Gianni Ross closed his first set over Dennis by winning the final three games of the 6-4 set just as Carolina’s Raphael Lambling topped No. 114 Henrik Wiersholm by the same score in the first set on Court 3.

After dropping the first set for just the fifth time in his 37 matches this season, Jubb wasted little time re-establishing his presence against the nation’s third-ranked player in Carl Söderlund, scoring an early service break and then winning three of the last four games to claim the second set 6-2.

Trailing 2-1, South Carolina’s youth needed to push back on Virginia’s more veteran lineup. The three matches still in their second sets were pushing to their ends simultaneously. The battle of freshmen at No. 2 went to the Cavaliers as Nakashima won the final two games, although Rodrigues was within a deuce point of the break needed to hold off the 3-1 Virginia lead.

Court 3 was all but in the Gamecocks’ win column with Lambling up 5-2, but the Virginia senior sensed the finish line coming for his team, and Wiersholm won the next three games to level the set at 5-5. The rally gave his teammate Ross just enough time to also launch a matching three-game streak to close the No. 4 match with a win over Dennis that delivered the Cavaliers’ fourth and deciding point of the contest.

UP NEXT
South Carolina junior Paul Jubb drew the No. 5 overall seed in the NCAA Singles Championship, which begins May 20 in Orlando, Fla.