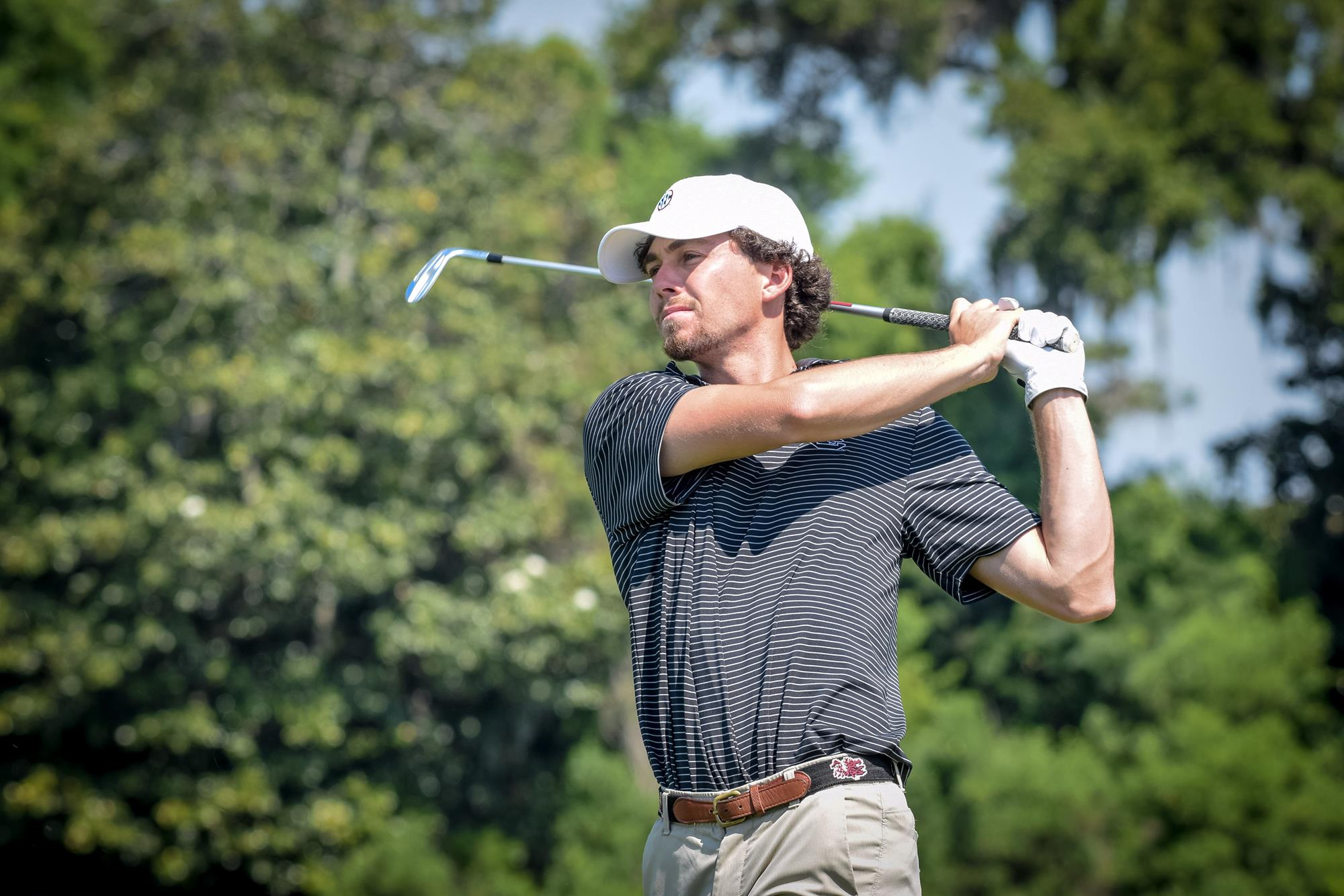 PULLMAN, Wash. – No. 17 South Carolina opens play at the NCAA Pullman Regional on Monday morning. The third-seeded Gamecocks will be paired with No. 5 Oklahoma (first seed) and No. 8 Georgia Tech (second seed) in the opening round, teeing off at 10:30 a.m. ET on hole one.

“SECs were a good wake up call for us,” said head coach Bill McDonald. “We played a little tight and didn’t look as loose as we had for most of the spring. This is a humbling game at all levels, and I think we learned from it. In the 13 years I’ve been here, it’s definitely the best team I’ve had in terms of unity and comradery – just the way they’ve gelled together, pushed each other in practice and held each other accountable. Talent wise I think we’re right there with some of the best teams I’ve had too, but there’s a lot left to be done. We’ll get some good play in this week, and then hopefully onto the next step.”

Seniors Scott Stevens, Will Miles and Ryan Stachler remain in the top-three positions in the lineup. Junior Caleb Proveaux, who is fresh off a T-9th finish at the SEC Championship (April 24-26), is in the four-man spot, as he has been all spring. Talented freshman Ryan Hall returns to the lineup as the five man this week.

Hall had a great fall with three top-20 finishes in five starts. The Knoxville, Tenn., native missed most of the spring with a wrist injury but is back healthy again. He played in the Wofford Invitational (April 1-2) as an individual, earning runner-up medalist honors in his only spring event. Hall shot 209 (-7) with a second round 65.

“Ryan is one of the top freshmen in the country,” said head coach Bill McDonald. “He came in highly recruited and played well for us in the fall. He’s healthy now. The only thing he’s going to have to watch is that he’s going to be so fired up to play.”

Sophomore Jack Parrott is the team’s substitute this week. The NCAA instituted a new rule this year for the postseason that a player may be subbed out at any time prior to the start of a round or match.

Live scoring will be available via Golfstat for every round.

ABOUT THE COURSE
Carved into a broad expanse of rolling hills on the Pullman campus of Washington State University, Palouse Ridge Golf Club is one of America’s finest public-access courses. This majestic 7,308-yard layout takes players on an unforgettable journey through ‘the Palouse,’ its undulating dunes a legacy of the last Ice Age. Designed by John Harbottle III, Palouse Ridge is an epic, grand scale creation that fits its setting hand-in-glove. The bold, dramatic layout, patterned after the classic courses of Scotland, has the aspect of an inland links. Sound strategy and clever tactics are required to score.

NCAA REGIONALS HISTORY
This marks Carolina’s 27th all-time NCAA Regional appearance and the 12th in the last 13 seasons under the direction of head coach Bill McDonald. As interim head coach in the spring of 2007, he helped lead the Gamecocks to the program’s first ever regional title at the NCAA West Regional in Tempe, Ariz. Carolina has six NCAA Championship appearances under McDonald, including a program record four-straight trips from 2013-16

McDonald led the Gamecocks to NCAA Match Play for the first time ever at the NCAA Championship in 2016. Carolina fell to Illinois, 4-1, in the NCAA Quarterfinals but notched its best finish ever at NCAAs with a T-5th finish.

Three-time All-American Kyle Thompson is the only player in school history to earn medalist honors at NCAA Regionals since its inception 1989. He won the East Regional in 1999 and the West Regional in 2001.

PULLMAN REGIONAL FIELD
Its a strong field this week with 10 of the 14 teams ranked in the top-60 of the latest Golfstat Team Rankings. No. 5 Oklahoma (top seed) and No. 8 Georgia Tech (second seed) will be the favorites this week with the 17th-ranked Gamecocks (third seed) and No. 20 Texas A&M (fourth seed) rounding out the top-25 teams competing for a top-five spot to advance to the NCAA Championship (May 24-29).

No. 44 Florida joins Carolina and the Aggies as the representatives from the SEC out west in Washington. Thirteen of the league’s 14 teams advanced to NCAA Regionals this season. Last year, the SEC became the first conference ever to send all of its member institutions to postseason play.

Here’s the full field and where the teams stack up in the latest Golfstat Team Rankings:

MCDONALD’S 24
Gamecock head coach Bill McDonald is the winningest coach by tournament victories in school history with 24 wins, three of which have come during the 2018-19 season. The team’s three wins this season marks the fourth time the Gamecocks have won three or more times in the same season under his direction (2012-13, 2014-2015, 2015-16, 2018-19). McDonald broke the previous record of nine wins held by Puggy Blackmon (1995-2007) with Carolina’s victory at the Carpet Capital Collegiate in September 2014. His squad captured a school-record five wins during the 2014-15
season.

UP NEXT
Eighty-one teams across six regionals are competing for a spot in the NCAA Championship (April 24-29) in Fayetteville, Ark., at the Blessings Golf Club this week at NCAA Regionals. The top-five teams at each regional will advance. Carolina is seeking its 21st all-time NCAA Championship appearance and seventh under the direction of McDonald.