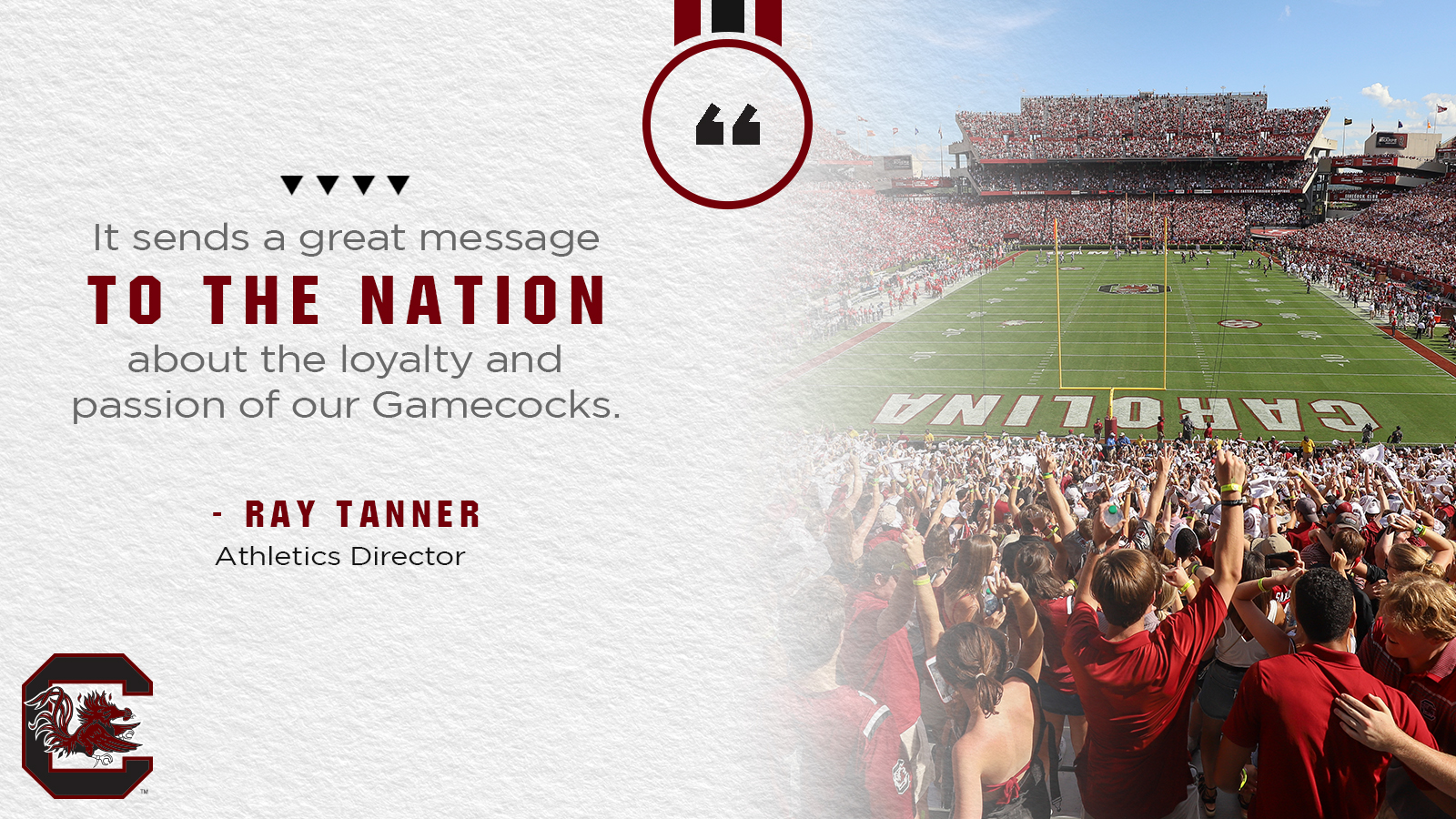 On the heels of three straight bowl appearances as well as the excitement of one of the most attractive schedules in all of college football for 2019, South Carolina is bucking a trend of declining attendance at many major college football schools and is enjoying its best ticket renewal rate in the last three years as Gamecock fans are once again showing their commitment to the program.

“The difference between this point in time last year and right now is that we’ve seen an increase of 17% in season tickets sold,” said Lance Grantham, Senior Associate Athletics Director for Ticket Operations. “That’s an ‘apples-to-apples’ comparison. That’s a significant number.”

“There’s nothing like a full Williams-Brice Stadium cheering on the Gamecocks,” said Athletics Director Ray Tanner.  “With the way our fans have responded to season ticket sales so far this year, it sends a great message to the nation about the loyalty and passion of our Gamecocks.  The support of our fans is very important as Coach (Will) Muschamp leads our program as we contend in the SEC and nationally.””

Season tickets will continue to be on sale until August 31, but with seat-selection underway since Monday (May 20), fans are encouraged not to wait too long in order to get the best seats in their desired location.

“Now is a good time to get your deposit in and get into the flow and get your priority for seating established,” Grantham said. “We’ll be here to give fans the best options possible.”

The current trend among major college football schools has been a steady decline in attendance in recent years. According to a report from CBS Sports, attendance at FBS games dropped for the seventh time in eight years in 2018, sinking to its lowest point in 22 years with a 3.2% decrease. Attendance at SEC football games declined to its lowest point since 2003 last season. The 2017 season saw college football’s largest per-game attendance drop in 34 years and second largest decrease on record.

“Our fans can make a difference.”
– Lance  Grantham

Increased television coverage may be one of the contributing factors to the decline as fans often don’t know the kick-off time until two weeks before games.

“We can’t dictate what times that games will be played,” Grantham said. “That can hurt depending on where you’re coming from and what the weather will be.”

As for South Carolina’s numbers heading in the opposite direction, there are a number of reasons that circle back to Gamecocks fans’ desire to be at Williams-Brice Stadium.

“The talent has been upgraded on the field,” Grantham said. “Coach Muschamp has done a great job of getting players for South Carolina to be able to compete. The competition level is great. That gives our fans hope. You also have to look at the quality of opponents this year on the home schedule. That helps move tickets as well. If you could see your team win those games, who wouldn’t want to be a part of that?”

The home schedule includes both teams that played in the national championship game last year with Alabama and Clemson, as well other programs on the rise with Florida and Kentucky. Other factors include a better game day environment, thanks to many improvements in and around Williams-Brice Stadium in recent years. This includes the recently upgraded video board, creation of the Springs Brooks Plaza and Gamecock Park, as well as the upcoming improvements in the 2020 Williams-Brice Stadium  Renovation Project.

“It is a great environment,” Grantham. “When the stadium is full, it’s as good as anywhere in the country, and I’ve been everywhere in our conference. Our fans can make a difference. They know it. When it’s full, they can really make a difference.

“The overall ease and access to and from the stadium has gotten better every year. Getting into the stadium, getting to your parking space, and having parking available all make a difference. We move people in and out of our stadium very easily. In that regard, we’re as good, if not better than many of our peers. We rate very high among our peers in terms of parking and amenities and tailgating situation. They can enjoy all of that in addition to watching a game and hoping the team will win.”