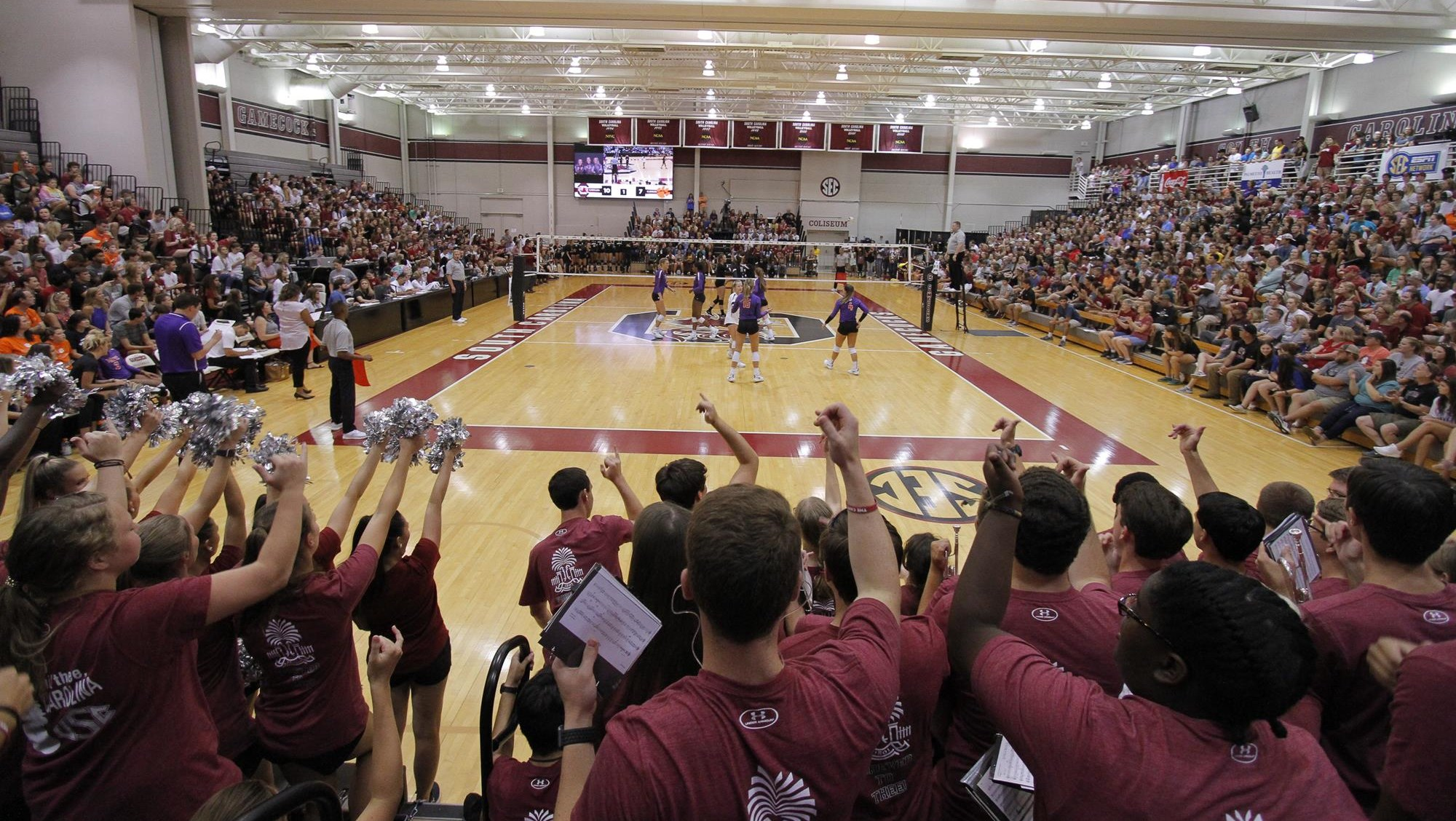 COLUMBIA, S.C. – The 2019 South Carolina volleyball schedule was announced Friday morning, with the Gamecocks embarking on an ambitious schedule to follow up 2018’s NCAA tournament run. Five of the team’s 12 non-conference matches come against returning NCAA tournament participants, and four more tournament teams await Carolina in SEC play. The second season under head coach Tom Mendoza begins on Aug. 30, and the home opener will be Sept. 10.

GAMECOCKS OPEN THE SEASON IN PITTSBURGH

The team kicks off the fall in the Steel City, and will face a pair of NCAA tournament teams from 2018. The weekend starts Friday, Aug. 30 against Cincinnati. The Bearcats made the tournament last season thanks in large part to the efforts of senior Jordan Thompson. She averaged over six kills per set while also hitting well over .300 and earned conference player of the year honors. Host Pittsburgh broke out in 2018, going 30-2 and winning the ACC before being upset in the second round of the NCAA tournament. The offense returns all five of its primary attackers, but did lose seniors Kamalani Akeo (setter) and Angela Seman (libero).

“That tournament will be one of the best opening-week tournaments in the country,” Mendoza said. “To open up our season at 10 a.m. against a tournament team in Cincinnati Friday and then Pitt coming in as a regional host in the tournament last year and ACC champion, we’re going to need to embrace that challenge. We want to be at that level, and this weekend gives us chances to do that, but everything is deserved. We need to prepare ourselves right away to be in a position to deserve the results we want.”

ANOTHER TOUGH WEEKEND AWAITS IN ORLANDO

Week two only gets harder for Carolina, as two more premier opponents wait for them in Orlando. UCF is hosting a three-day event, taking on the Gamecocks on Sept. 6. The Knights rolled to a perfect 18-0 record in the American Athletic Conference and hosted a regional in the NCAA tournament a year ago but were upset in the first round. All three of UCF’s top hitters return, highlighted by sophomore left-side hitter McKenna Melville (4.50 kills/set). Kansas was on the wrong side of the bubble in 2018, but have traditionally been one of the stronger Big 12 squads and return a strong core of contributors from last fall.

“UCF is another team that was a site host and we’re excited to play them and Kansas all in the same weekend,” Mendoza said. “Kansas just missed making the tournament last year but they’re just a few seasons removed from making the national semifinal. This is what we’re looking for out of our non-conference schedule, the only downside is that we’re on the road for the first two weekends but it’s the challenge we need to raise our profile nationally.”

After returning from Orlando on Sunday, the Gamecocks open the home schedule with a Tuesday night dual against Charlotte at 7 p.m. Just 48 hours later, the team heads to the upstate for matches Thursday and Friday in Clemson. The in-state rivalry with the Tigers resumes Thursday at 7 p.m. and another challenge awaits Friday evening with a dual against Wisconsin. The Badgers are coming off a run to the NCAA quarterfinals last season, finishing fourth in the loaded Big 10.

“It’s a quick turnaround, to play three matches in three days in Orlando, come home Tuesday for Charlotte and then head right to Clemson, but scheduling top-tier teams requires some creativity,” Mendoza said. “We’re excited to have all these matches so close to home so our fans can come out and support us.”

The lone home tournament of the season will run Sept. 20-22, with the Gamecocks playing Maryland Friday night, then hosting Kennesaw State and High Point for a Sunday doubleheader. The Terps were a surprise team out of the Big 10 under first-year head coach Adam Hughes, winning 18 matches overall, and will look to take another step forward in 2019. Junior Erika Pritchard led the way with an all-conference showing last year, leading all Big 10 hitters with 4.32 kills per set. Kennesaw and High Point are consistently in the running for postseason bids; the Owls made the tournament in 2017 and HPU has been in the last three NCAA tournaments. The Panthers made the 2016 and 2017 postseasons under Mendoza.

“It’s an unconventional format but the most important thing was we got the teams we really wanted to play so I think we hit a home run with this tournament,” Mendoza said. “Maryland was another bubble team who really went on a run in the Big 10 last year as a young squad, and to get them in our gym will be exciting. Then you add in a Kennesaw State team that is historically one of the strongest mid-major programs in the region, and end it with another potential conference champion in High Point. These three teams are going to win a lot of matches this year, and we hope that the support of our fans can help us find success to close out the non-conference season.

“We’re playing the ACC champion, the first- and second-place teams from the AAC, one of the best teams in the Big 12 and a Wisconsin team that is always making deep runs in the NCAA tournament,” Mendoza added. “We addressed in the spring, even before our schedule was set, to get the right schedule regardless of the day or time so we can be in the conversation for another NCAA tournament run. We’re going to have to be ready to go from day one.”

“We like the way our schedule lays out, but these teams all know each other so well that we have to have all areas of our game ready to go when we hit the end of September,” Mendoza said. “The level of the SEC is rising so much that there’s no easy matches, last year we had 12 teams were in the top 100 of the RPI so there are opportunities for quality wins.”

While the team’s first postseason trip in 16 years made last fall special, Mendoza is ready to bring a veteran roster up another level in year two of his tenure.

“We learned a lot from last year and we’ll take what we can from 2018, but this is a different team ready for a new experience. We’re back at 0-0 for our record, as nice as last year was,” Mendoza said. “To me, last year wasn’t just some magical dream season, we had our ups and downs and there were plenty of moments where we wished we played better.

“There were injuries, missed opportunities, the normal things that happen in a season. The stars didn’t just magically align, so we know that you don’t need to be perfect to make this 2019 great but we need to maintain focused on the things we did well last year and build off the leadership and talent we have back in our gym. That’s what’s going to take our program to the next level.”

Single-game tickets will go on sale on Monday, Aug. 5, with prices of $5 for adults and $3 for youth ages 17 and under. Additional ticket information will be available later this summer.