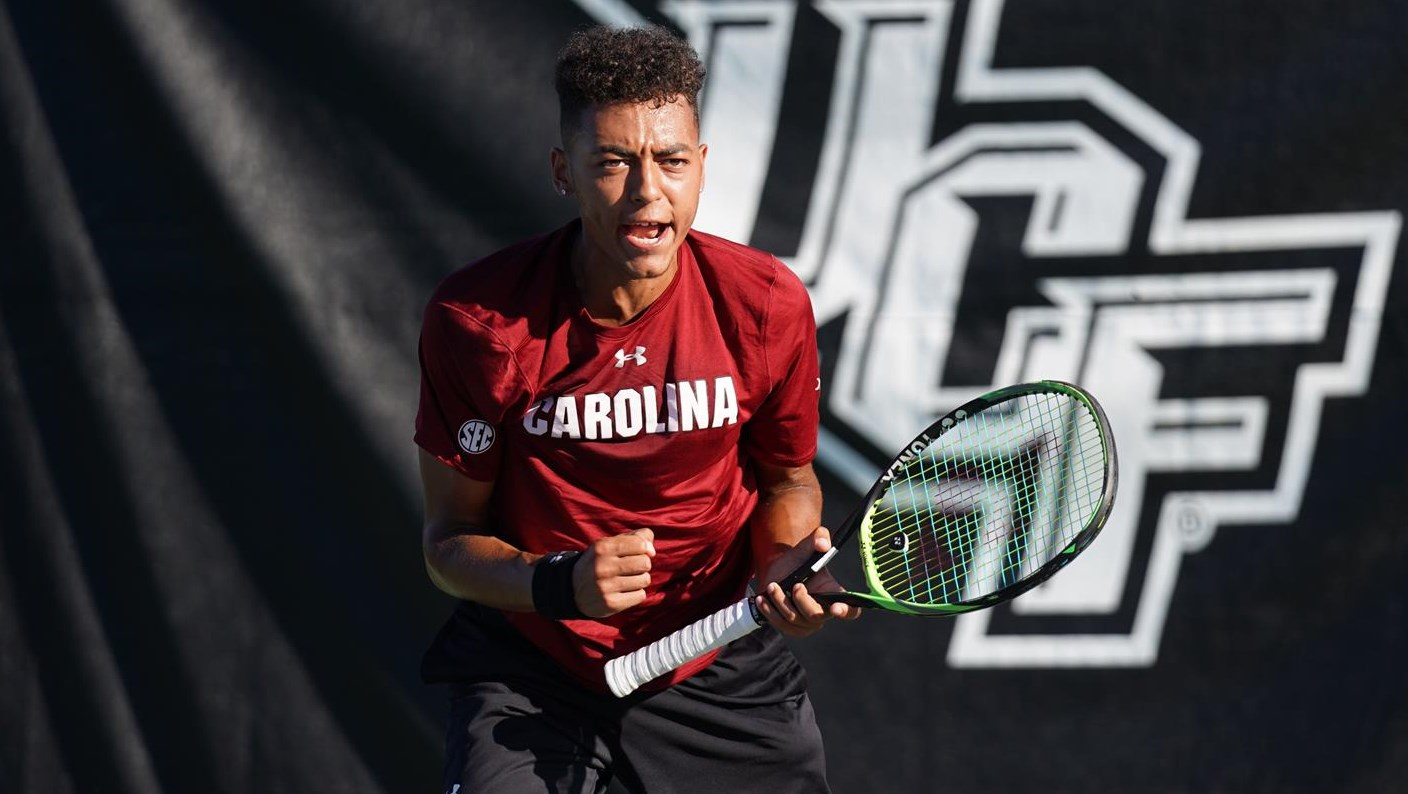 ORLANDO, Fla. – South Carolina junior Paul Jubb capped off his brilliant run through the NCAA Singles Championship with a 6-3, 7-6 (2) win over the top player in the country to deliver the Gamecocks’ first national championship in men’s tennis. The Hull, England, native dropped just one set in his six victories en route to the title.

Facing a familiar foe on Mississippi State’s Nuno Borges, the No. 1 ranked player in the nation, Jubb knew he would have a battle on his hands in the championship match. He also knew he had pushed Borges to the limit twice before this season.

“I was so relentless with my feet,” Jubb said. “That was the main thing we were saying with my coach, just going into every single ball. I’m one of the toughest players from the back and my tempo is so high, so I was just trying to keep that up the whole match.”

Both players shook off early nerves as each dropped his first service game. Jubb turned the momentum after a tough hold at 3-3. After clipping the net twice to see a 40-Love lead erased, Jubb worked a long rally until Borges sailed his final shot long to decide the game.

Jubb immediately pounced in Borges’ service game, bursting to a 40-15 lead. The Bulldogs’ senior again forced the game to deuce with a big serve, but again saw Jubb take the deciding point when his great return led to a Borges error and a 4-3 Jubb lead.

The two SEC heavy-weights went toe-to-toe as the next game also went to deuce. Again Jubb delivered, this time with a clean forehand winner up the line to surge ahead 5-3. He went on to take a 40-15 lead in the next game and closed out the set with a great return for a 6-3 victory.

Jubb kept the pressure on in the second set, winning the first two games before Borges got back on serve with a break in the third. After both players held at Love in the eighth and ninth games of the set, both were pressed but held in their next service games, including Borges holding off Jubb’s first championship point with a huge second serve to even the set at 5-5.

Two games later, Jubb served first to open the tiebreak, winning that point and two more on Borges’ serve as the Gamecock senior’s forehand continued to paint lines. The two split the next four points for a 4-2 Jubb advantage.

After switching sides, Jubb’s great return immediately put Borges behind the point. As he tried to work his way back in, Jubb came to net and knocked off a high backhand volley into the open court to go up 5-2. A Borges mishit set up another championship point.

Jubb hit a strong serve up the T that had Borges reaching, and the Gamecock junior buried a forehand up the line for the clean winner and the national title.

“Unbelievable,” Jubb said after the match. “I had to overcome so much mental toughness after losing to him twice this season. Overcoming that fear and regaining believe that I could win was so big for me today, and I did it.”

South Carolina Head Coach Josh Goffi
On the emotions after the match…
It was pretty intense. Just knowing Jubby and where he’s come from and what he brings to the table daily … there are a lot of people in the world who wanted it for him. For me, I wanted it really bad for him. There’s not a better kid in the world who deserves something like this to happen to him. That was a special moment for me as I know it was for him. I was happy I got to play a small part in his journey, coming from Hull, England, with his coach Johnny Carmichael, who has been his rock there. I’ve tried to play a similar role during his time in the U.S. It’s been a great responsibility for me, but it’s also been an amazing pleasure to do that. It was a really fulfilling role for me. To see him go out there and face all the fears in the world out there, face every ounce inside of him that wanted to look backwards, just like everyone else. He’s a true champion, grabbing the bull by the horns and making it his. That’s why he’s a special kid.

On his comfort level heading into the championship match…
We were very disciplined in our routine before matches as far as what we were eating, when we were eating, how we were doing things. It was the same every day, and that provided a foundation for him to relax and know that things were going to be okay, that we weren’t going to be rushed, and the body would feel good going into competition time. All those things are important, to take as many things like that off the table as possible.

When we got there that day, Jubb was just as relaxed as the other days. Obviously nervous, but one thing that stuck out that day was that he was more open to share how he was feeling prior to the match. Just by him being able to talk about it, allowed us to work through some of those issues and visualize some of the important points in the match. And those exact important moments in the match came up, and he went out and executed exactly like it was rehearsed in the locker room. So, that was pretty special to see.

On how Jubb grew throughout the tournament…
The mentality that we had was only focusing on day one, and that was just competing hard and winning ugly with what he was able to bring to the table. There’s not changing that once the tournament starts; it is what it is. It wasn’t until the morning of the first match that he really got that right mentality down. He knew that he could do well this year, and, I think it was weighing on him. Players tend to have the mentality of looking ahead to win the tournament before it’s even started, meaning they try to play their very best tennis on the day of the first round versus working through the tournament. As we all saw, his tennis got better with every round, and that was the goal. He did a great job building from match to match.

On the mentality around preparing for the tournament…
The mentality was switching from dual-match mode to tournament mode, which is much different. You have to be able to really just build off each match, be patient with yourself and be okay with not playing great tennis round-to-round. The goal is always just to be better than the guy across the net on that exact, specific day. And, really, that was it. In regards to practice, we were focusing on the fundamentals of Jubb’s game, what he needs to bring to the table that makes him great. We buttoned those things up and got back to technical work on each area of the game. As the two weeks progressed, we pushed him into more of an external focus, using those areas of his game to create the stress across the net that he’s so great at doing. He was able to execute both of those things pretty flawlessly.