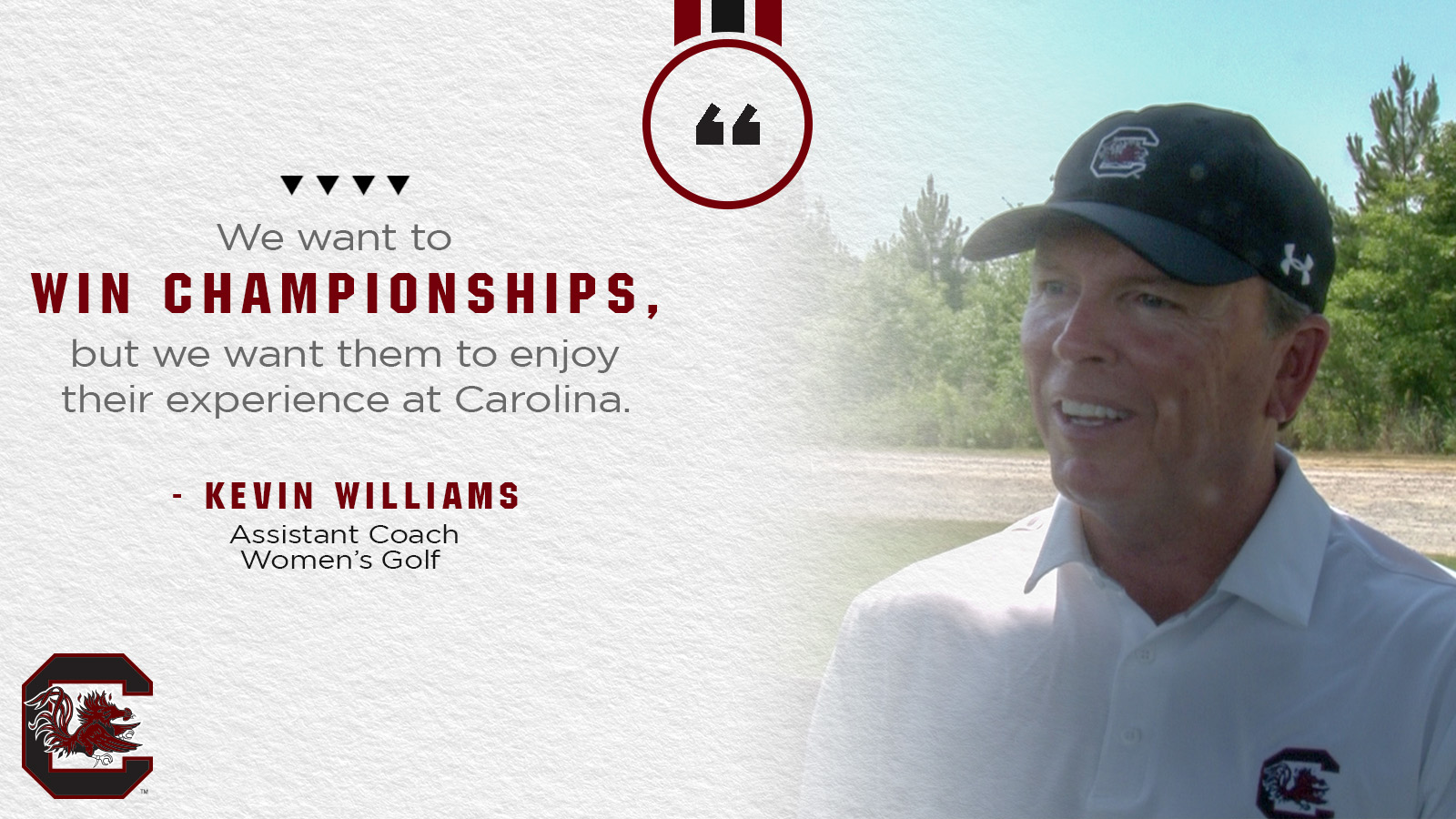 New women’s golf assistant coach Kevin Williams may be new to South Carolina, but he is no rookie when it comes to coaching at a high level. Williams recently joined Kalen Anderson’s staff after 17 years as the head women’s golf coach at East Carolina where he helped the Pirates reach the NCAA Tournament 12 times, including 10 of the last 12 years. He had previously coached ECU’s men’s team for 10 years.

“I think Kalen and I are going to hit a home run,” Williams said. “We mesh very well. We have a nice trust and respect for each other. My role is a little different. She’s the boss, and she is laid back. It’s going to allow me to flourish in that role as her assistant. I have an extensive background in recruiting in Europe, so I think that’s going to help us. I’m going to learn from her, and there might be some things she learns from me. I think we’re going to make a really good team.

“The resources we have available here at South Carolina give us the opportunity to win national championships and to win SEC Championships. That’s why I’m here; to help Kalen in anyway possible and to hopefully help win a ring, multiple rings!”

Known as a top-notch recruiter, Williams said that those same resources that were so attractive to him are also very attractive to prospective student-athletes.

“Sitting out here at this practice facility, that’s one of the first things I want to show them,” Williams said. “You’re going to have two coaches here at South Carolina that are going to do everything they can to make you successful and achieve the goals you have in life, whether it’s playing professional golf or going out and becoming a doctor or whatever chosen career you have. You have a chance to come here and be in one of the top programs in the country and play for one of the top coaches in the country, and play in arguably the toughest golf conference in the country.”

“I think they feel how much I care about their success, whether it’s in the classroom, personally, and obviously as far as the golf is concerned.”
– Kevin  Williams

Williams fills the position vacated when Director of Golf/Associate Head Coach Puggy Blackmon retired after four decades in the profession. Always smiling, Williams said he enjoys everything about being a coach.

“I love the game. I love recruiting overseas. I love traveling. I love still playing,” Williams said. “I love my job. I probably work too much at it and could probably use more down time, but it’s just something I get fired up about every day.”

Coming into an established program with a reputation for success, Williams has proven to be a successful communicator with student-athletes, and he looks forward to making an impression with the Gamecocks.

“That’s been a strength; being able to communicate with the student-athletes, being very open and honest with them, and letting them know what our expectations are,” Williams said. “Coach Anderson’s style is very similar to mine, which is great, and our recruiting backgrounds are very similar, which is going to help us team up to be very successful.”

While he may be the “new guy” for the Garnet and Black this year, gaining the trust of student-athletes is a challenge he looks forward to every year.

In having success with coaching men and women, Williams hasn’t had to change his style very much throughout his career.

“That goes back to the success I had as a club pro in treating everybody the same,” Williams said. “I treat people the way I would want to be treated. Doing that with either the men’s or women’s team has made us successful. I think they feel how much I care about their success, whether it’s in the classroom, personally, and obviously as far as the golf is concerned. We want to win championships, but we want them to enjoy their experience at Carolina.”

After being a very successful head coach for a long period of time, Williams acknowledges his role as an assistant coach will be a little different.

“I’ve always considered myself a really good team player,” Williams said. “That’s the way I’m going to look at my role here. I’m going to be able to help Kalen as much as possible in trying to achieve the expectations of this program. They have a high standard here, having won a bunch of [NCAA] regionals in the last ten years.”

While Williams occasionally enjoys relaxing on the beach or maybe reading a good book, don’t expect him to sit quietly this summer. Instead, he’ll be traveling and checking in with current and future Gamecocks as they play around the world this summer in order to start building that trust with his new team.

“It’s almost three months until classes begin. I can’t wait for the student-athletes to get back on campus and helping them with their games and really getting to know them!” Williams said. “I want to be a part of winning championships. I think at Carolina, the foundation is here, and the resources are here to win championships.”