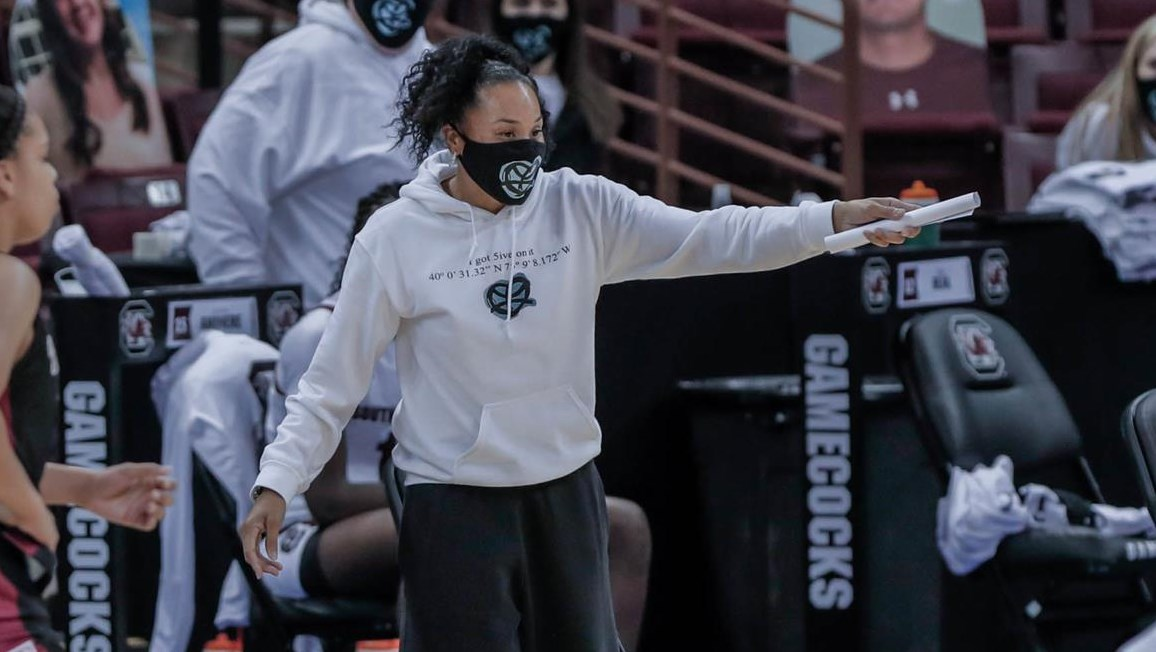 COLUMBIA, S.C. (AP) When Zia Cooke is confident in practice, it usually shows the next time South Carolina takes the court.

Cooke felt good all week leading up to facing Temple, then showed that off by tying her career high with five 3-pointers on the way to 23 points as the fifth-ranked Gamecocks dismantled Temple 103-41 on Thursday night.

”When my confidence is there, I usually know it’s going to be a pretty good night,” Cooke said.

Cooke sparked a 7-0 run late in the first quarter to break a 14-14 tie and send the Gamecocks (5-1) to their second straight victory since having their 29-game win streak halted at home against No. 4 North Carolina State two weeks ago.

For Cooke, the team’s plan since that Wolfpack loss was simple: ”Not do the things we did against NC State, ball movement, getting teammates involved. And just doing everything to make sure that never happens again.”

For Temple (0-3), it was the fourth straight loss against its former coach, South Carolina’s Dawn Staley, who got her college coaching start with the Owls in 2000.

Temple coach Tonya Cardoza, a teammate of Staley’s at Virginia who succeeded her as Owls coach, was bothered that her players didn’t fight against South Carolina.

”That was a waste of time,” she said. ”We didn’t compete the way that I thought we would.”

Aliyah Boston had 14 points, nine rebounds and three blocks for the Gamecocks, who reached 100 points in two of their three home games this season.

South Carolina took control as Cooke got going in the final 90 seconds of the opening quarter. She drove for a basket before knocking down a 3-pointer after a steal by Brea Beal.

The Gamecocks kept the pressure on after that, outscoring Temple 23-11 to lead 44-25 at the half.

It was a much more satisfying showing than the last time the Gamecocks played at Colonial Life Arena, when South Carolina fell to North Carolina State 54-46 on Dec. 3.

Staley didn’t hold back after that, criticizing her team’s coachability and the players’ desire to put up any wild shot they could get. Her best postgame zinger that night was telling her team, which shot 10 percent in the second quarter of their first loss in more than a year, that she could be ”blindfolded with defense” and shoot better.

Her players paid attention with a solid recovery at then No. 23 Iowa State a few days later, winning 83-65 in the Big 12/SEC Challenge.

Against Temple, the Gamecocks took another solid step forward with suffocating defense and solid shooting. South Carolina forced 18 turnovers, 13 in the first half, and hit eight 3-pointers, five by Cooke, to take over.

Mia Davis, who came in averaging 28 points a game, had 17 to lead Temple.

GAMECHANGER
Carolina shook off a sluggish start that saw Temple lead 10-9 with 5:52 to play in the first to close the opening frame on a 12-4 run, bookended by 3-pointers from sophomores Brea Beal and Zia Cooke to take control of the game and lead 21-14 after the first.

KEY STAT
The Gamecocks played with discipline tonight, only turning the ball over six times in the contest, which allowed Temple only four points off turnovers compared to the Gamecocks’ 30 points off 18 Owl turnovers.