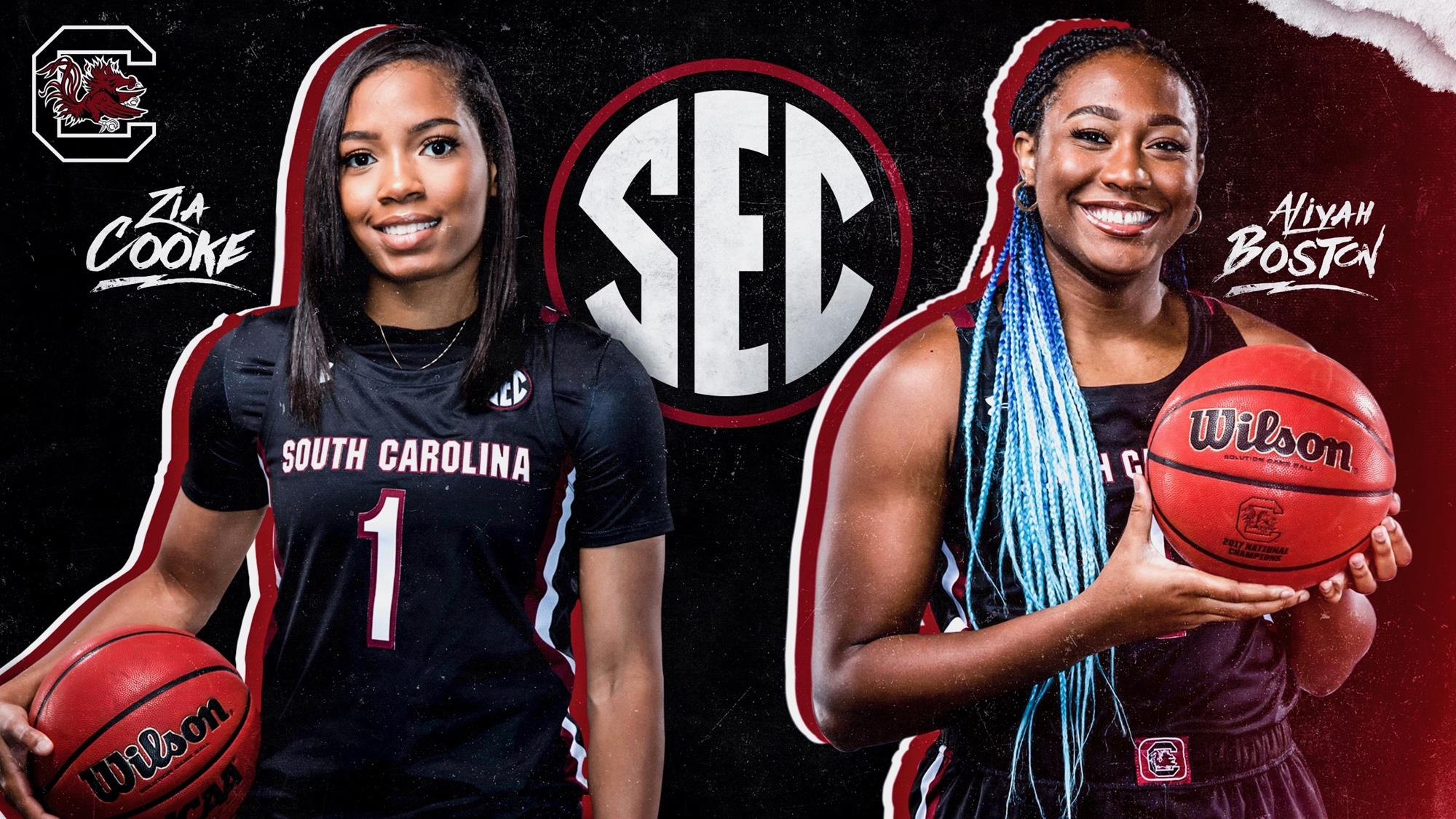 Share
COLUMBIA, S.C. – South Carolina sophomore Aliyah Boston picked up one of the SEC’s highest honors for the second season as Co-Defensive Player of the Year, and sophomore Zia Cooke joined her on the All-SEC First Team, the league announced today. Boston becomes the Gamecocks’ first back-to-back SEC Defensive Player of the Year. This marks the second-straight season at least two Gamecocks have earned SEC First-Team honors.

Boston is on every national player of the year watch list heading into the postseason and is still in contention for the Naismith Defensive Player of the Year and the Lisa Leslie Award as well. She has been dominant in SEC games, especially on the glass with double-digit rebounds in 15 of 16 league games this season. Her 12.3 rebounds per SEC game is a new South Carolina record as is her 62 offensive rebounds in league action. Her 25 career double-doubles include 16 in SEC action, including nine this season alone, which is one shy of the school record. Boston’s 3.6 blocked shots per SEC game this season are also a program record, and her 93 career blocks in SEC games is already second in school history. On the season, Boston’s ranks 12th in the nation in blocks per game (2.9), 13th in rebounds per game (11.7) and 19th in offensive rebounds per game (3.9). She averages a double-double overall (13.0 ppg/11.7 rpg), against SEC opponents (13.3 ppg/12.3 rpg) and in the Gamecocks’ 11 games against ranked opponents (13.5 ppg/12.1 rpg).

Cooke followed up her 2020 SEC All-Freshman Team selection with All-SEC First-Team recognition a season later. She is the Gamecocks’ top scorer at 15.9 points per game, which rank her 13th in the SEC. She led the team in scoring 12 times through 23 games this season, including eight of16 SEC outings. Three of her four 20-point games this season were against ranked opponents, including 21 against No. 17/17 Kentucky. In addition to leading the Gamecocks in points, Cooke is second in assists, handing out 2.2 per game, and her 35.6 percent 3-point accuracy is also second on the squad.

The No. 7 Gamecocks (19-4, 14-2 SEC) earned the second seed in this week’s SEC Tournament in Greenville, S.C. South Carolina will take on the winner of the game between No. 10-seed Missouri and seventh-seeded Alabama on Fri., March 6, at 6 p.m. on SEC Network.